Resident Evil 3 Remake is one of those games that just keeps on giving when it comes to disappointing fans. The latest debacle involves moderators locking the forum threads exposing Capcom’s false advertisement of Jill Valentine’s outfit from the original Resident Evil 3.

For those of you who aren’t in the known, Capcom had the art team censor Jill Valentine’s original tube top and mini-skirt combo from the 1999 version of Resident Evil 3 in the Resident Evil 3 Remake. Instead of wearing the mini-skirt from the original game, she’s now wearing a skort to prevent any upskirt shots or tantalizing fan-service.

You can see the change to the outfit courtesy of WolfiePL Gaming’s video below.

This led to gamers becoming angry that they weren’t getting what they thought they were paying for.

A thread about the issue was made over on the Steam forums on April 2nd, 2020.

“lol Jill is wearing shorts in her preorder outfit
Here’s the proof I took from a stream, can’t even give us a faithful recreation of her ‘mini skirt’ outfit from 1999, what a massive let down”

Ten hours after making the thread and 303 comments later, a Steam moderator going by SoupSipper with a big “Valve” logo by their name and a Baby Yoda avatar closed the thread, writing…

“This thread was never going to be constructive and has therefore been locked. Thanks for your understanding.” 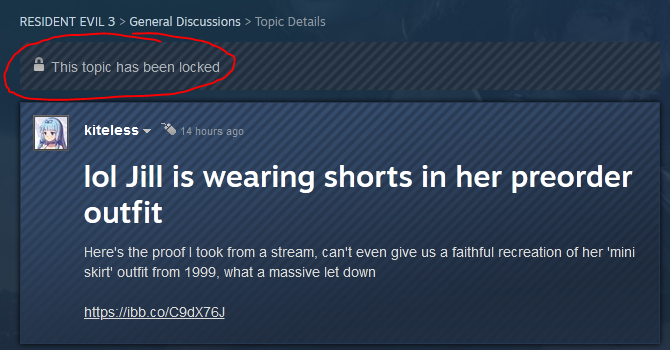 Some users are also being banned for speaking out against the censorship apologists and pro-censorship drones.

Other threads were also locked in the past for pointing out that Jill and Nemesis were changed, and that Jill was no longer as attractive as she used to be.

Sentinel’s post on March 18th, 2020 decrying Jill and Nemesis’ looks was also locked for the same reason as the thread above and by the same moderator.

On March 20th, 2020, the thread from afterdark asking why Jill was made to look so ugly was also locked.

And yet again, on March 25th, 2020 the thread from Se Me Queman Las Papas was also locked after he pointed out that “Jill walks and looks like a man lmao”.

Another thread from Se Me Queman Las Papas also got locked on March 25th, 2020, where he pointed out that the gore in Resident Evil 3 Remake was downgraded compared to Resident Evil 2 Remake, despite both games running on the same engine and being on the exact same platforms. 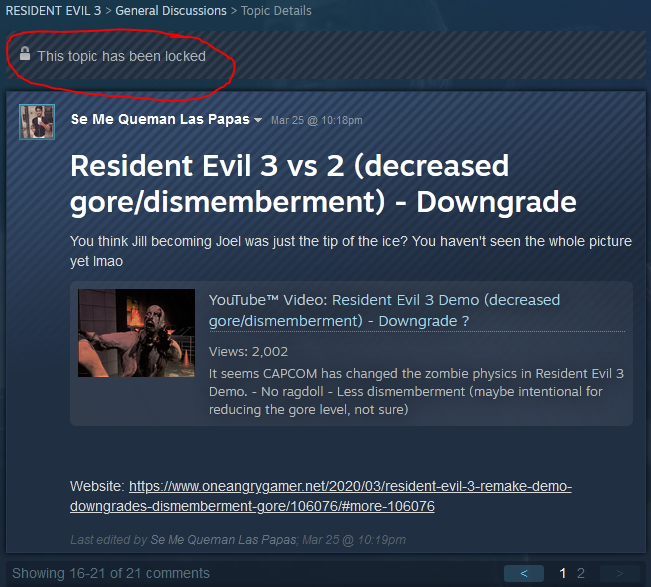 Other threads warning people about the game missing the Clock Tower segment and all of the associated gameplay segments (e.g., enemies, boss fights, items, and puzzles) also happened to get locked. 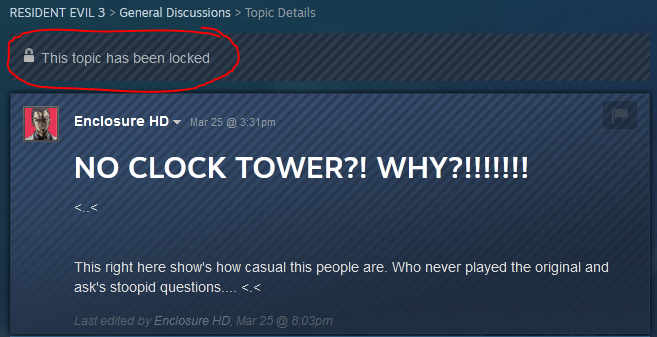 Other users had their threads locked and their accounts banned from participating in the forums after they pointed out that it seemed like a lot of paid shills were flooding the forums and censoring the information about all the missing content in Resident Evil 3 Remake.

Steam user Magic Emperor had his thread locked and his account banned for pointing out some common truths. 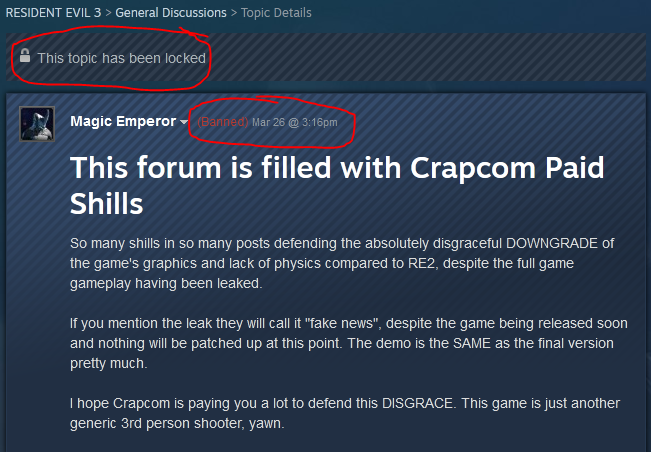 Nothing he said was wrong.

Nevertheless, the thread was locked and his account was banned.

We saw similar censorship tactics employed on the forums for other converged games, such as Mortal Kombat 11, Wolfenstein: Youngblood, and Vampire: The Masquerade 2.

Everybody who tried warning everyone else about the game turned out to be right.

I can’t wait to see how the Centrists™ will defend the game now.

(Thanks for the news tip Rodrigo Ybañez)