YouTube is ramping up their censorship of users, this time going after a content creator with nearly one million subscribers. So this is no small fry being hit by video content host’s anti-freedom antics. Zanar Aesthetics is the person of interest in this case, and they’ve been attempting to rally support and eyes on their channel being deplatformed by what YouTube claimed to be “abusive legal requests”.

Originally Zanar Aesthetics made a tweet about the termination on April 21st, 2020.

My Youtube channel with over 994.000 subscribers just got terminated, no warnings, no communication, terminated just like that. Over 3000 videos and 5 years work. As if Covid19 isn’t bad enough already. Please look into this @TeamYouTube and bring my channel back @KEEMSTAR @Fwiz pic.twitter.com/MpRKxLUaRH

The gaming content channel was known for posting up walkthroughs, trailers, and gameplay clips from a wide variety of game. They were one of the first to showcase the sexy customization features for Nioh 2.

Now all of their videos have gone kaput.

Various other top YouTubers came out to support them, such as Shirrako and GamerrZombie. This eventually compelled the sleeping giant that is Team YouTube to come out of the cave and state that Zanar Aesthetics should have received an e-mail as to why the termination took place and that if they feel it’s in error to appeal the decision.

Thanks for reaching out – you should’ve received an email with more details about the reason why the channel was terminated. Also, if you think it happened in error, you can always appeal. Sharing more info here: https://t.co/ttfebnw1gg

On April 25th, 2020 Zanar Aesthetics received a response from YouTube as to why their account had been terminated, and it was made known that it was for “abusive legal requests” and that his account would not be restored.

He shared the e-mail message from YouTube, which you can view below.

I never abused the counter notification system. All the rare requests I filed were accepted in past except for the last 2 and it led to channel termination. I claimed fair use and evidence no violations were made. @iancorzine @KEEMSTAR @JohnScarce @ytcreators @Fwiz @derraleves

You can view an image of the e-mail below if the tweet is unavailable.

If you’re unable to read the message, it comes from a Google YouTube employee named James who wrote…

“Hope this email reaches you well.

“I just got an update from our internal team. After a careful review, your account was suspended for submitting abusive legal requests. Sad to say, you will not be permitted to continue use of the platform.

“Let me know if you have other questions.

It’s true, if you attempt to view any of Zanar’s videos you’re met with the big black message that informs you that the channel has been terminated. 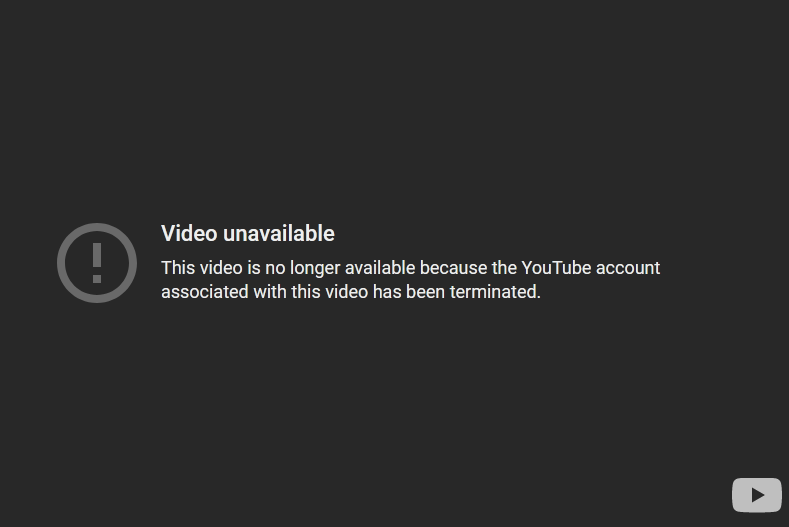 Years of hard work, gone in an instant. Like a bright flame snuffed out by the sweaty fingers of the Intersectional Inquisition.

As pointed out by Zanar Aesthetics, they aren’t the only ones who have had their account terminated out of the blue.

They are making also huge $ from creators/us, just to treat us like this. If you make $60k it means Youtube made $40k thanks to you. @McJuggerNuggets @ProPepper and plenty of other big youtubers had their channels terminated out of the blue too

But that’s not even the worst part.

Others also pointed out that YouTube’s targeted termination of accounts is highly biased.

Some of you may not have been following the news but content creator Suzy Lu has been abusing the use of copyright striking channels and basically making use of the platform with carte blanche, yet her account hasn’t been affected.

@TeamYouTube Suzy lu breaks the copyright law and you let her get away with it, why can’t Zanar have the same privilege? he only missed one digit of his number that was given to you. Yet you treat him like a Murderer @TeamYouTube ain’t corona virus bad enough already?

If you’re unfamiliar with the Suzy Lu story, YouTuber TheQuartering has been covering the situation surrounding Suzy Lu and the ever-escalating drama that seems to ensue when invoking the very mention of her name.

As for Zanar, his channel is no more.

After accruing more than three quarters of a billion views since March 2nd, 2014, according to Social Blade, all of his hard work and 3,341 videos are gone.

This is basically a lesson to any content creator out there that it doesn’t matter how much time, how much effort, how much work you put into the content you think you’re creating, YouTube can snuff you out as quickly as the snap of a finger and make you poor, broke, and homeless quicker than a crippled Bankok whore forced into retirement.

Just remember: If you’re on YouTube, your days are numbered.

(Thanks for the news tip megin-hights43)