Keung Lee’s Battle Maiden Knuckle Bomb #2 manga managed to smash through its fixed $1,000 goal during the first day of crowdfunding after nearly 300 people pledged funds to bring the unapologetic sexy fighting series to the public.

The second series of the issue has already accrued $16,450 as of the writing of this article, and it still has 29 days left on the IndieGoGo campaign.

The story of the manga follows a ramen soup waitress named Saaya Volkova who is fatally wounded one day by a mercenary when she attempts to save her uncle from an attack. Her uncle uses an experimental super serum on her that endows her with special abilities, enhancing her martial arts skills and raising her power level exponentially, turning her into the Battle Maiden.

There’s a supplemental package that comes with a 24-page booklet diving into the Murakumo Comic Universe that offers more info on the Battle Maiden Knuckle Bomb and Ehrgeiz universe. This also includes additional info on the cancelled Ehrgeiz 2015 manga.

The whole project is a throwback to the old-school of comics back when women were allowed to be sexy. Well, in manga over in Japan they can still be sexy, but in Western comics it’s a huge no-no even for some indie brands. 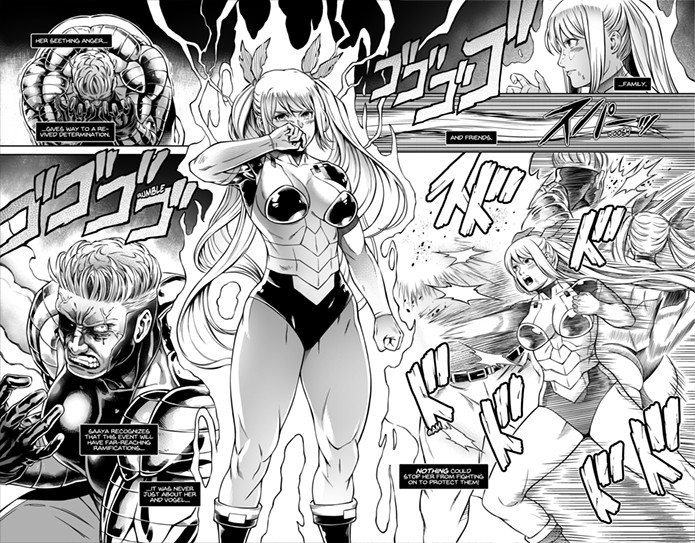 Lee doesn’t care about the authoritative stranglehold that Social Justice Warriors have over the comic book industry at the moment, and decided to go all-in on a book about a sexy maiden that mixes ryona with ecchi content as Saaya battles in her sexy swimsuit that conveniently rises up, breaks, and tears apart during battle, giving you a pretty good look at her fit and shapely body… the way it was always meant to be.

If you like what Keung Lee is doing with his comic, you can contribute to the cause or learn more about the second issue of the comic by visiting the IndieGoGo page.