Digital Cybercherries’ Hypercharge: Unboxed is one of the very rare releases in [current year] that is unapologetically designed for a specific audience: boys. There are no matriarchal messages in the game, no obnoxious female leaders barking orders at you over the intercom; no lesbians with half-shaven heads lecturing to you about toxic masculinity; no female soldiers yapping about equality, or rainbow-colored flags occupying the character customization options.

For all intents and purposes, Hypercharge: Unboxed is a game designed first and foremost for male gamers looking for an action-packed gaming experience. An esoteric concept in today’s gaming industry. 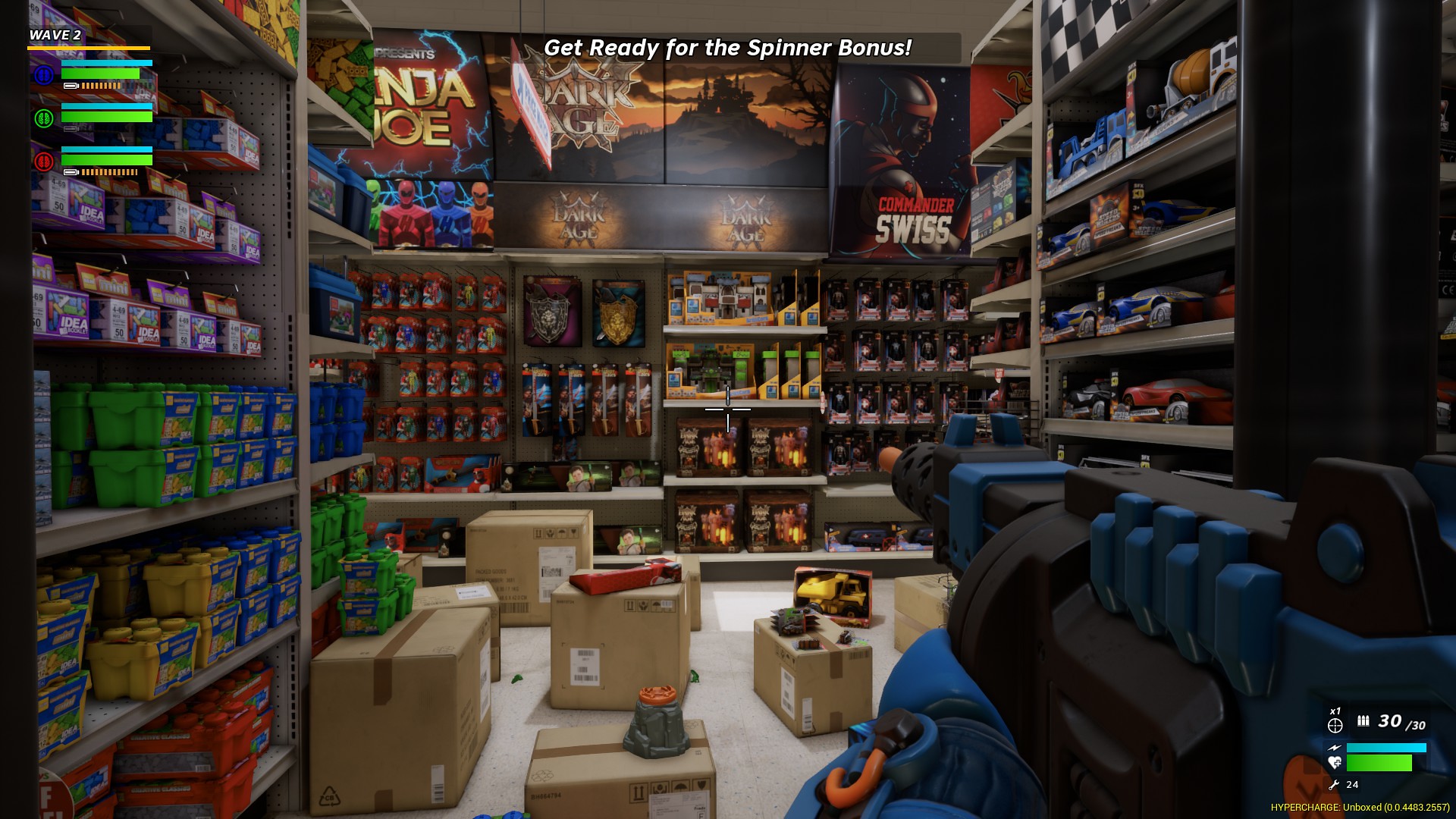 The objective is to defend hypercores from being destroyed by multiple waves of enemies, including toy soldiers, flying saucers, depressed globs, marching robots, toy helicopters, tanks, and even dinosaurs!

Each player has the option of equipping three different buildables, ranging from mines and turrets to globs of glue and flame-traps.

There’s the usual tower defense traps that you have access to, along with an array of weapons you can acquire in each stage, or purchase from toy boxes sprinkled around the level. You can equip up to two weapons at a time, including machine guns, shotguns, grenade launchers, sniper rifles and lasers. There are also specialty weapons you can access such as miniguns and flamethrowers. 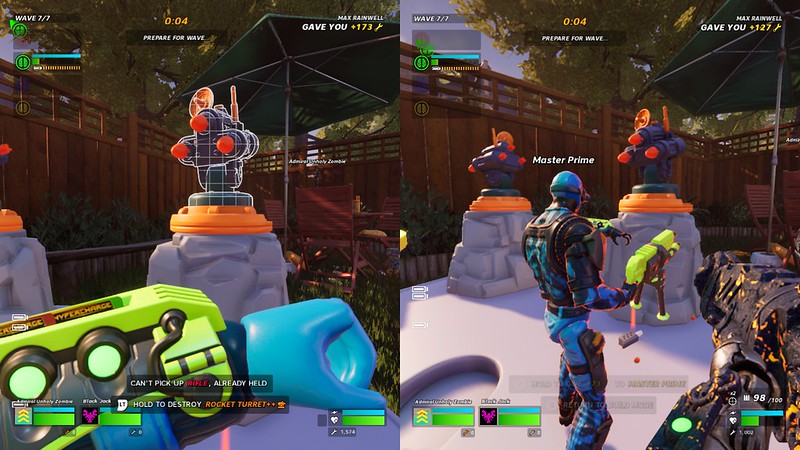 To help increase a weapon’s proficiency, you can also nab various add-ons, such as flashlights, scopes, stocks, and bipods.

Unfortunately you don’t get to equip or select your weapons before a match begins. This is done to balance the game out for the competitive modes, where you can go head-to-head against other players in PvP or partake in a couple of different mini-games, such as a spinning top challenge or duking it out with tanks.

If it were possible to customize your weapon loadout before a match, then you could very well fix yourself with auto-aim and improved accuracy and keep yourself equipped with a grenade launcher at all times to make short work of your opponents.

The real meat and potatoes of the game is in the co-op mode, where you play through each of the levels and unlock new skins, buildables, and characters by completing progressively harder iterations of each stage. Heck, you can even unlock cheats the old fashioned why by discovering them, as opposed to paying for them like in Ubisoft games.

The challenge of the game resides in knowing how to strategically place down your buildables to protect the hypercores while also monitoring their battery charge.

There’s a fine balance required in not only keeping your hypercore powered but also keeping it well defended.

You see, you can’t just place down the biggest and baddest towers and hope to skate by to victory. If you put down turrets, sonar, or rockets they will require power to stay active. The hypercore’s shields also requires battery power, so you have to actively monitor what you place down and constantly keep on the lookout for new batteries, all while fending off the hypercores from invading enemies. 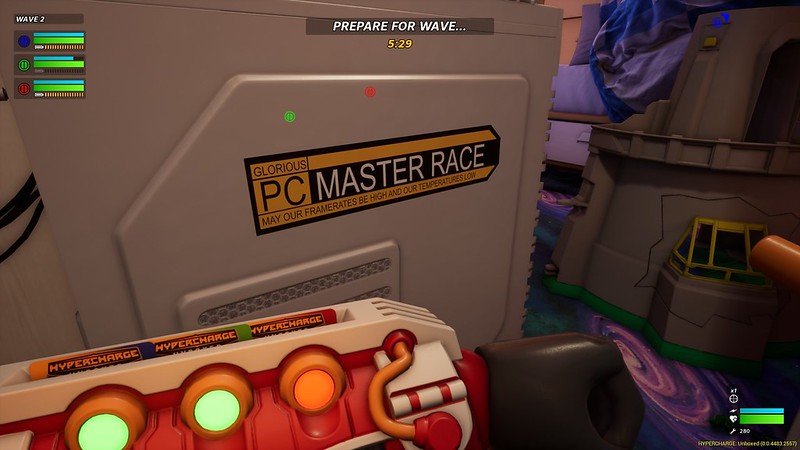 While the early difficulty settings allow you to skate by with some basic defenses on-point weapon accuracy, the harder difficulty settings rely more on memorizing enemy patterns, and micromanaging battery power for each of the hypercores to get the most out of each buildable.

The meta-game is reliant on alternating between weapons and buildables to fit the current wave of attackers. 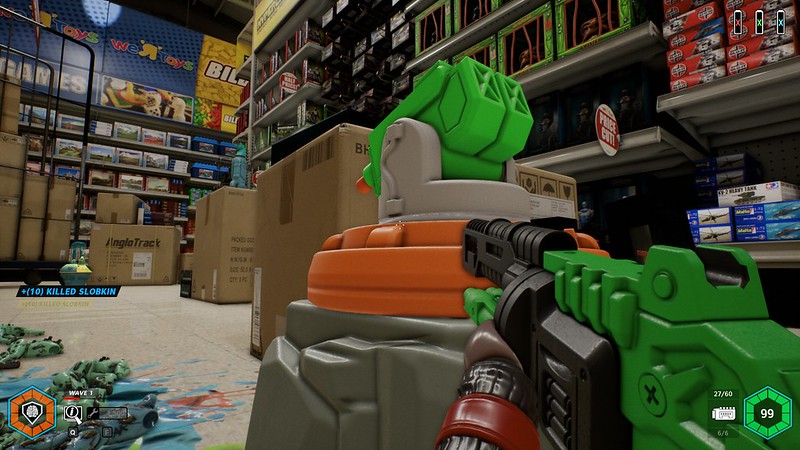 Spinny tops, for instance, require explosives or shotguns to effectively get rid of them quickly and efficiently, otherwise they can wreak havoc on your defenses. Glue will effectively slow them down to a practical halt.

However, glue is useless against soldiers, robots, and anything that flies. So you have to constantly have to modify and shift your tactics around on the harder difficult settings to effectively defend the hypercores.

That’s not to mention that you have a limited amount of chips you can use to place down defenses each round. This is where the micromanagement comes into play as you have to wisely choose when and where to place down certain high-cost defenses, especially since if you lose a turret or sonar in one of the early waves, you’re basically out of a couple hundred points that could have been better spent on something more long-lasting or less viable for destruction. 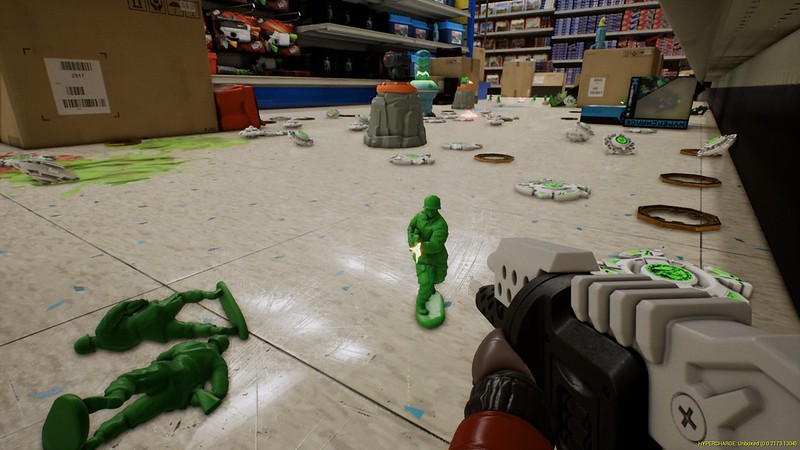 The real highlights of the game, though, is the impeccable amounts of detail that the artists paid to classic 1980s and 1990s-style toys.

If you grew up during that time period there are a ton of throwbacks to that era with lots of references to NERF rifles, G.I. Joe, He-Man, LEGOs, Jurassic Park, model car kits, Tonka, and more. Obviously they don’t use the licensed names or registered trademarks, but one glance at the alternate appellations and you can quickly figure out what the developers are referencing.

Visually the game is also gorgeous. It looks like toys come to life in very realistic looking environments. The Unreal Engine really shines here with Hypercharge: Unboxed, especially on PC where you can crank up the graphics to the max settings and appreciate the high-quality texture work, realized light maps, and pin-point accurate model designs that make the rooms in the home feel lived in and the toy store feel like an actual place you’ve visited as a child. 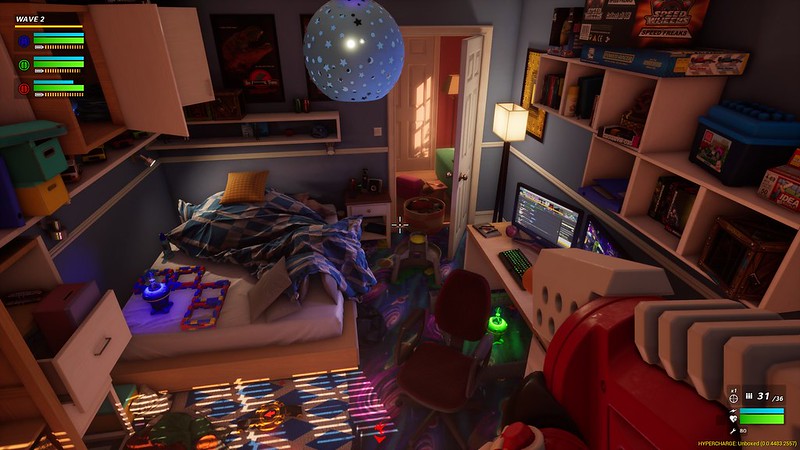 It’s chock full of nostlagia, and it’s probably best described as a mix of Small Soldiers and Toy Story smashed together in an Unreal Engine-powered tower-defense shooter.

It’s all topped off with an excellent soundtrack of eclectic tunes that range from intense rock tunes to synthwave tracks to really tap into that retro feel that the game has going for it.

On the downside, I do sort of wish that there were a couple of more stages, and maybe one or two more weapon types, such as a flechette cannon, a burst rifle, a shockwave launcher, or a centerfire rifle.

In any case, it’s a budget-priced indie game for only $19.99, and it’s one of the rare games out there that supports LAN, split-screen, and online play, along with the ability to mix-and-match split-screen and online multiplayer. 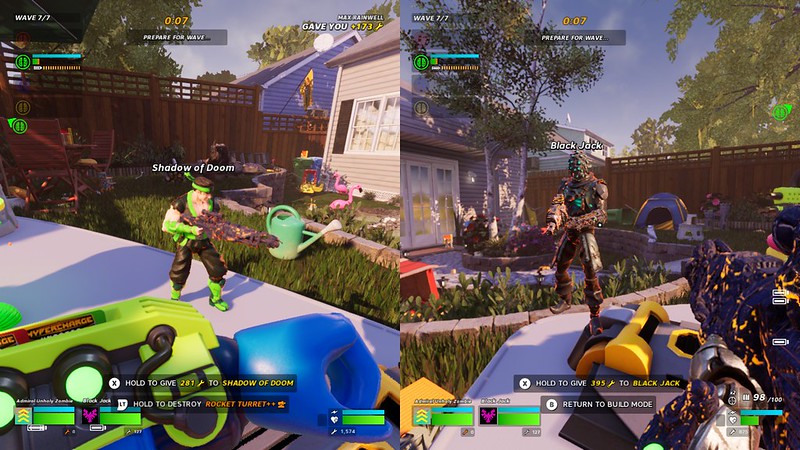 I love that this is a game that celebrates the action-figure days of a young boy’s youth, and does so unabashedly, unlike so many other games out there designed to subvert masculine traits or constantly beat you over the head about how bad it is to be a boy, to like boy toys, or to involve yourself with anything that boys typically enjoyed doing growing up.

The celebration of boyhood fun is on full display here in Hypercharge: Unboxed and it’s one of the reasons I love the game so much.

Hopefully Digital Cybercherries avoids becoming like so many other developers out there who have submerged themselves in Left-wing politics to spite their own fans for practically zero gain.