Screen Rant did an article recently about Netflix’s upcoming Masters of the Universe: Revelation, compiling information they’ve gleaned from various sources, including showrunner Kevin Smith talking about the project across various interviews and podcasts. In the article they stated that the upcoming show would star Teela as the main protagonist, which prompted YouTube outlet Clownfish TV to inform fans that they were right all along about He-Man not being the main character of his own show in the Netflix reboot-sequel. Well, Kevin Smith decided to chime in with his own retort and defend the show after backlash erupted over people finding out that He-Man would be sitting second fiddle to Teela.

On May 28th, 2020, Kevin Smith posted the following tweet related to the news about Teela having higher billing than He-Man in the Masters of the Universe: Revelation Netflix show.

With all due respect to @screenrant, I’ve read every @MastersOfficial script for our shows (plus wrote a few) and viewed 4 amazing animatics. While Teela is as present as she’s always been in the MotU adventures and she plays a big role, our series is LITERALLY all about He-Man. https://t.co/1rOjbLDfHe

However, Smith doesn’t actually deny what appears in the Screen Rant article, only that the series is “LITERALLY all about He-Man.” But as a few commenters pointed out in Smith’s own Twitter thread, just because the show is about He-Man doesn’t mean he will be the star of the show.

It wouldn’t be any different to how Jeff Bridges’ Flynn was the star of Tron instead of the character Tron; or how Garrett Hedlund, who played the son of Flynn, was the star of Tron: Legacy, instead of Tron; or how Highlander: Endgame’s main protagonist was Duncan MacCleod even though the story was all about Connor MacCleod’s feud with Jacob Kell; or how Godzilla is never the main character in his own films!

In fact, Twitter user Carl Traill points out that while Smith attempts to cut Clownfish TV off at the knees, they’re more right than Smith is given that PowerCon had the same description of Masters of the Universe: Revelation as Screen Rant… a year earlier!

It’s not just news sites and Youtubers saying it.
Last years Power Con was saying it too when it was revealed.
We’ll just have to wait and see when it’s finally released. pic.twitter.com/qno4uVLcVf

If you’re unable to view the description card, it reads…

“A radical return to Eternia, REVELATION is a direct sequel series to the classic era of MASTERS OF THE UNIVERSE. Featuring fan favorites He-Man, Orko, Cringer, and Man-At-Arms, the story pits our heroic warriors and guardians of Castle Grayskull against Skeletor, Evil-Lyn, Beast Man and the vile legions of Snake Mountain!

“But after a ferocious final battle forever fractures Eternia, it’s up to Teela to solve the mystery of the missing Sword of Power in a race against time to prevent the end of the Universe! Her journey will uncover the secrets of Grayskull at last. This is the epic He-Man and the Masters of the Universe saga fans have waited 35 years to see!”

If you doubt the description is real, you can see the screen capture below just to drive the point home. 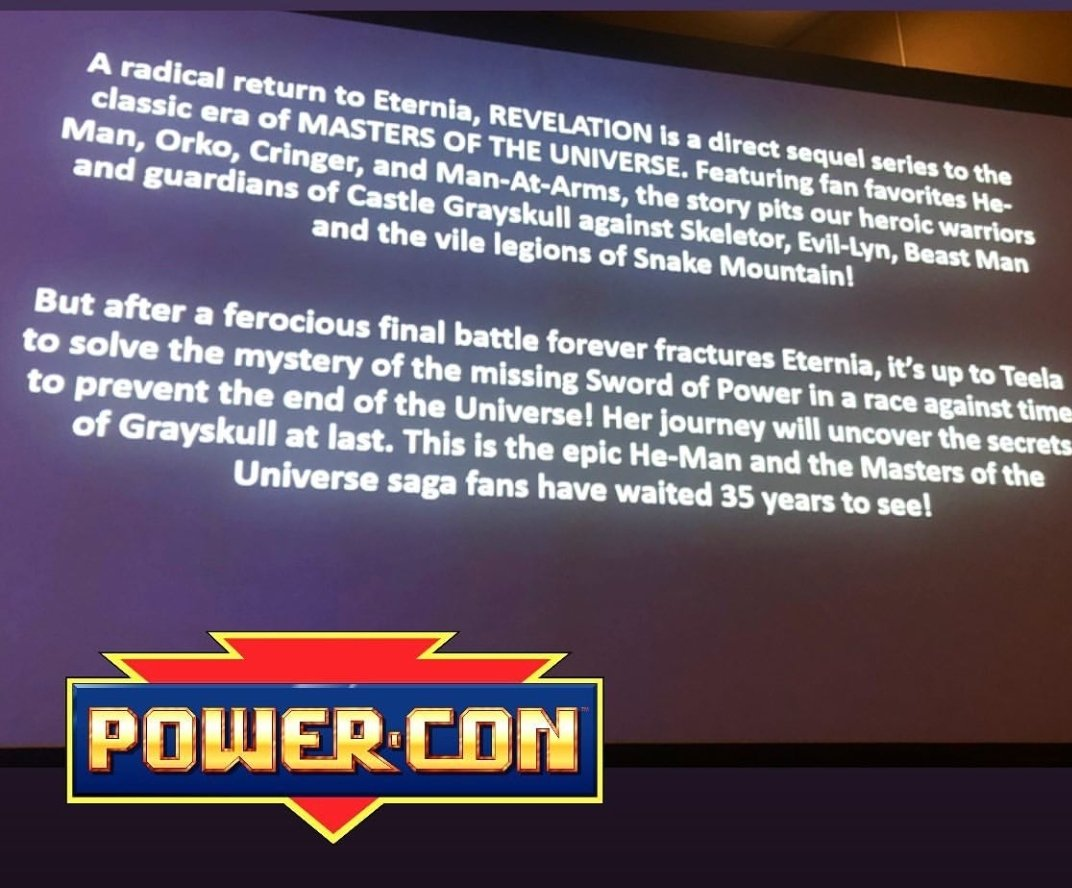 What’s more is that this was also the same description that showrunner Kevin Smith rattled off at the PowerCon panel from August, 2019.

You can hear Smith read off the description at the 36:12 mark in the video below, uploaded to his very own YouTube channel.

So did the description of the show magically change and Teela is no longer the main protagonist? Or did Clownfish, Screen Rant, PowerCon, and Kevin Smith himself somehow get an approved description from Mattel and Netflix wrong?

Oh, and don’t forget that Netflix openly promotes the gay agenda and their kids’ shows are aimed at inculcating and grooming kids into accepting homosexuality.

(Thanks for the news tip Endzeit)