Patreon has been targeting Japanese artists and developers, as well as anyone who draws in what was called the “Japanese style”, because they claim that some of the characters looked like minors, even if the characters were canonically over the age of 18. In the latest row, Patreon targeted a Chinese artist and developer going by the handle of ZXC for posting content from his game Latex Dungeon. They wanted him to refrain from sharing images of the game via direct messaging, e-mail, or even on Discord because they claimed that the fictional characters in the H-RPG weren’t giving consent.

The e-mails that Patreon sent to ZXC were shared on his Patreon account, but the account is now in lockdown and “under review” after he removed the art from his account, but refused to stop posting on Discord.

Another content creator, ECCMA417, managed to copy the screenshots of the e-mails that Patreon sent to ZXC before his account went into lockdown and shared ZXC’s message on his own Patreon account.

This started after users reported ZXC to Patreon’s Trust & Safety Team. On April 22nd, 2020, Sebastian from the T&S division told the content creator he would have to remove his Latex Dungeon and SimTentacles art, or any links to the games.

Even more than that, Sebastian outright told ZXC he would have to censor his games otherwise he couldn’t link to or even discuss them in connection with his Patreon account.

“Your games SimTentacles and Latex Dungeon seem to heavily feature glorification of sexual violence in the form of rape and non consensual sex. As a reminder, content that depicts any form of non consensual sex, such as rape or the use of brainwashing to coerce consent and take sexual advantage of characters, is considered to be a glorification of sexual violence.

“Content glorifying sexual violence cannot be funded by or linked to or from your creator page in any way. Removing the content from your page is not enough, you need to update your games so they don’t features this type of content.” […]

ZXC complied by removing his art from his Patreon page. However, that wasn’t enough.

In no uncertain terms, Sebastian then told ZXC he would have to stop posting his content on Discord, or sharing it via e-mail or direct messaging, or else his account would be terminated. You can view the message that was sent to him on April 29th, 2020 below. 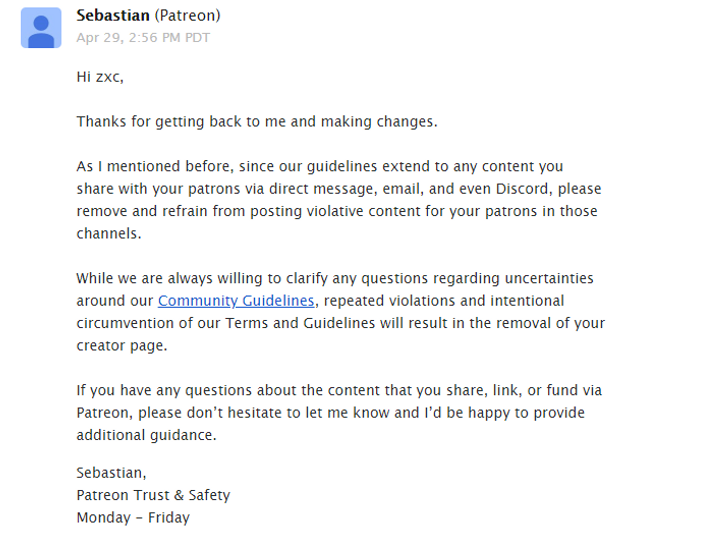 “As I mentioend before, since our guidelines extend to any content you share with your patrons via direct message, email, and even Discord, please remove and refrain from posting violative content for your patrons in those channels.”

So basically, even after ZXC removed his art from his Patreon page, he was still sharing updates for Latex Dungeon and similar works in private to the people who followed him.

Patreon forbade him from sharing his works in private to the people who followed him.

Essentially, even when ZXC complied by removing the art from his page, Patreon discovered he was still sharing images and updates via a Discord channel and told him he had to stop sharing the content on there as well.

“I can accept that patreon don’t like my game and art so i remove the all post maybe i can just draw some happy latex girl on patreon for safe but now patreon want me remover the discord? i am sorry i can’t do it it is not even mine it is Created by my friends and fans i just share art and chat on discord.” [sic]

So in result his account was locked down and brought “under review”.

ECCMA417, another Chinese developer and artist, was none too pleased with the way Patreon handled it and said he was also starting additional funding options elsewhere. In the comment section he noted that he’s opened up a SubscribeStar and Fanbox account.

At the moment he’s working on the Gothic ryona H-RPG, LonaRPG.

ECCMA417 mentioend that he would be mocking SJWs and fighting the good fight until they come for his account, writing…

“yes, i will not stop use this until they start hunt me. and i will not post any picture in here because a sword could count as violence. and based on Freud theory a stick can count as Human Penis, and you get Sexual violence. i will stay here, mock all of those shlt until they come.” [sic]

You can still get your hands on the RPG Maker version of ZXC’s Latex Dungeon, which is currently available on ACG and f95Zone.

(Thanks for the news tip JimmieTheRustle)