Unsurprisingly everyone’s most loathsome pedophile affiliated anti gamer site is at it again. As predicted, the revelations of player’s ability to customize both their genitals, testicles, and select a gender in Cyberpunk 2077 have not gone over too well with the majority of ResetEra users who wished to keep their accounts from being banned. That’s right; if you legitimately were excited or made a futanari joke, your account promptly was banned.

“Players can select a gender and customize their [Cyberpunk 2077] character; customization can include depictions of breasts, buttocks, and genitalia, as well as various sizes and combinations of genitals.” https://t.co/hU6R2lbwhL pic.twitter.com/sgYy1a3Vrk

Jokes of no fun allowed are far from jokes.

During the entire vacuous conversation, not much of anything was said whenever they weren’t talking about how problematic the content was. That is when they even recognized the content existed in the first place and weren’t going off what a concept artist made up months ago.

Those that enjoyed the idea of Futanari simulator were indeed banned because if someone enjoys a feature, it is fetishization of transgenderism. Ignoring the two fundamental facts that firstly transgenderism is an offshoot of the transhumanist philosophy of reshaping our bodies according to our whims with the use of advanced technological capacities. Born of a refuted treatment advanced gender dysphoria, it is was never intended to be an ongoing cultural identity.

Secondly and this is the critical part, Futanari is hermaphroditic not transgenderism. In the world of cyberpunk, it would be a transhumanist philosophy and cultural norm rather than carrying any of the ideas from the current year LGBT movement.

When it wasn’t being called fetishization, it was considered exploitation of the transgender identity. Despite the aforementioned reality of its origins, cultural implications, and scientific and cultural classification.

Of course, progressives are never happy when they get what they want. It’s never enough, it is problematic, and you are never the good guy for catering to them. 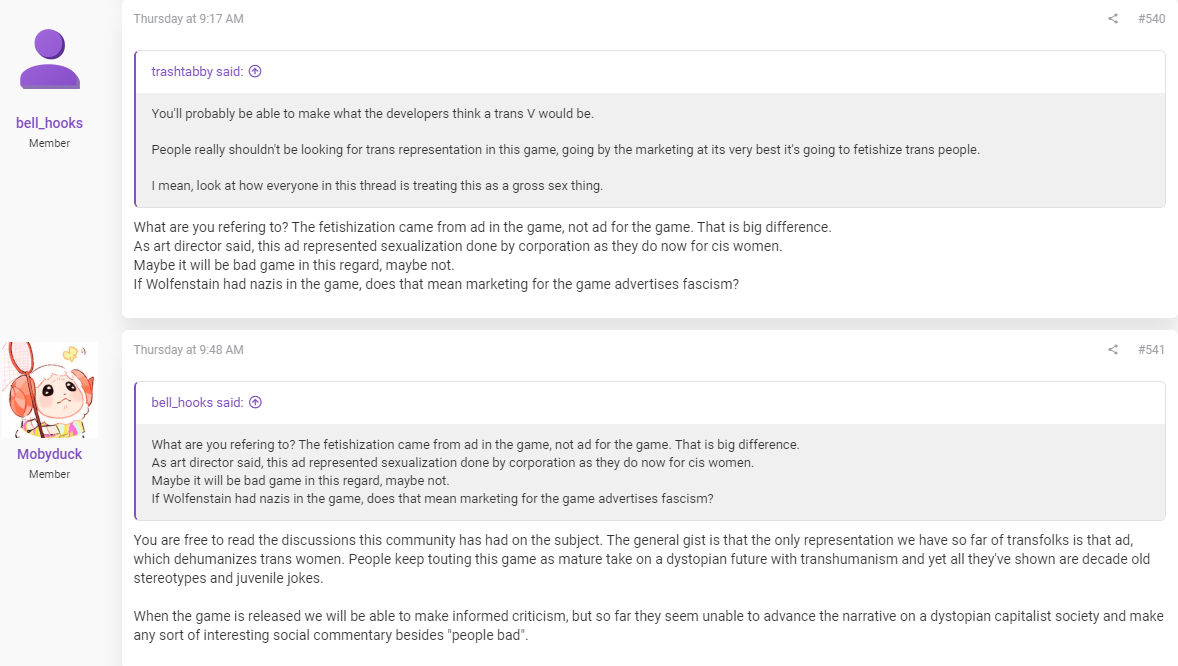 Unlike the right, libertarians, or authoritarians, the left can never be pleased by any capitulations. After all, for one to be happy, they have gotten their way they need to actually believe in the rhetoric they espouse rather than merely adopting it without consideration or contemplation, or alternatively use it as a political tool to achieve different ends.

At the very least, through all the minutia of meaningless banter and wokeness, a single user appreciated and offered a valid point in regards to the nature of an RPG.