[Update: 5/24/2020] Another member of Croteam has clarified that the Harpy will be uncensored in Serious Sam 4, and that the censored version circulating the web is a model from a GDC panel from two years ago.

[Update: 5/21/2020] Following more complaints from gamers, Danny made an additional comment on May 21st, 2020 about why the Harpy was changed for Serious Sam 4, writing…

Where did I say it was censorship? 🙂
I said it was a design choice that had nothing to do with showing or not showing boobs. I’m guessing the character artist felt this looks better. Even the concepts for the harpy didn’t have fully exposed boobs.

I realize someone cares about stuff like this, but design changes are happening all the time. Look at the scorp, or the Khnum. It’s the way stuff works.

At the end of the day, though, I hope this thread doesn’t end up being a place of unrest and fighting. I haven’t locked it because it’s fun reading up on different opinions and passionate answers. Let’s keep it clean so it can go on.

Peace and love. Boobs or not!

The best response to Danny’s post was from CoolNatureBoy, who asked why didn’t they just add variations so people could have the option of which Harpy they wanted to see in the game?

[Original article:] Serious Sam 4 was finally given a release window of August, 2020 for PC and Google Stadia. The announcement came with a slew of new promotional videos for the game, including weapons, environments, and enemies. Well, some gamers were curious about one enemy in particular, the Scythian Witch-Harpy from Serious Sam 3: Before First Encounter. They noted that in a previous teaser video that she was covered up, and if she would be uncensored like she was in Serious Sam 3 for the release this August? Well, the developers responded in the thread noting that there were better places to look at “gazoongas”.

The original thread was made by CoolNatureBoy on May 20th, 2020 following the official announcement of the game’s release window and platforms. CoolNatureBoy posted comparison videos between a NSFW cutscene from Serious Sam 3 at the 2:46 – 2:55 mark, which you can view below…

…and a character profile of the Scythian Witch-Harpy from a technical showcase that was posted up back on April 30th, 2020.

You can see the harpy at the 17 second mark in the video below.

While most people didn’t make much of a fuss about the showcase back then — figuring that they censored it for promotional purposes — they were curious if the harpy would be uncensored in the final version of the game.

A few people in the thread attempted to justify that the Harpy was not censored, and that – using a blurry image from one of the recent trailers – you could still see her nipples. The developer put that claim to rest when Croteam’s Danny came into the thread and stated…

“Didn’t really go through the entire thread, sorry. But there are way better places to look at gazoongas than a video game. 🙂

Essentially, nearly ten years after the release of Serious Sam 3: BFE, boobs are now verboten in an ‘M’ rated game… if it’s targeting men or designed to tantalize. 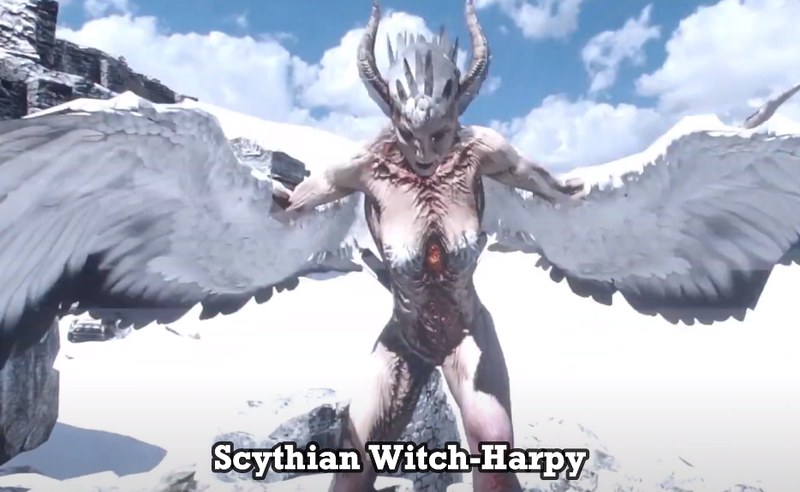 In the original release they allowed for mod support, so you could very well install a mod where the harpy’s boobs were covered up if you felt that strongly about it. But now, they don’t even have that option. Of course, modders would have to do the reverse and mod the bare boobs back into the game, the way it was always intended to be.

Expect the Centrists™ to tie themselves into a knot trying to argue over and under why an ‘M’ rated game made for [current year] is no longer capable of showing monster tits but why homosexual kissing is fine and dandy in kids’ media such as She-Ra or Adventure Time.

(Thanks for the news tip Pepeeja)