When it comes to mammaries, you don’t play around. There are people who are adamant about their proper depiction when it comes to the circumference of the areola, the buoyancy of the fatty tissue under the lobules,  the protuberance of the nipples, and even the gap between the sternum. So obviously, when people noticed that the Harpy in Serious Sam 4 appeared to be censored, they were going to be miffed if the bare boobs from Serious Sam 3: BFE were going to be removed for some puritanical reason in Serious Sam 4. Well, that’s what almost happened with Croteam recently, and they found themselves in the news for a lot of the wrong reasons, but thankfully one of the developers decided to clear the air.

This was mostly due to what one of the developers had been saying in the Steam forums regarding the Harpy being censored in Serious Sam 4. Well, another developer at Croteam has clarified the situation, confirming that the “censored” model of the Harpy was from an old build and that the latest build features the uncensored Harpy, complete with bare nipples and areola.

After the Steam thread turned into a hot mess, some gamers decided to ask Croteam about the censorship over on the Serious Sam 4 Discord channel. It was there that Solais, a modder for Serious Sam who eventually became a level and then game designer, confirmed on May 23rd, 2020 that the censored version of the Scythian Witch-Harpy was only made for demonstration purposes at a panel during the Game Developers Conference. 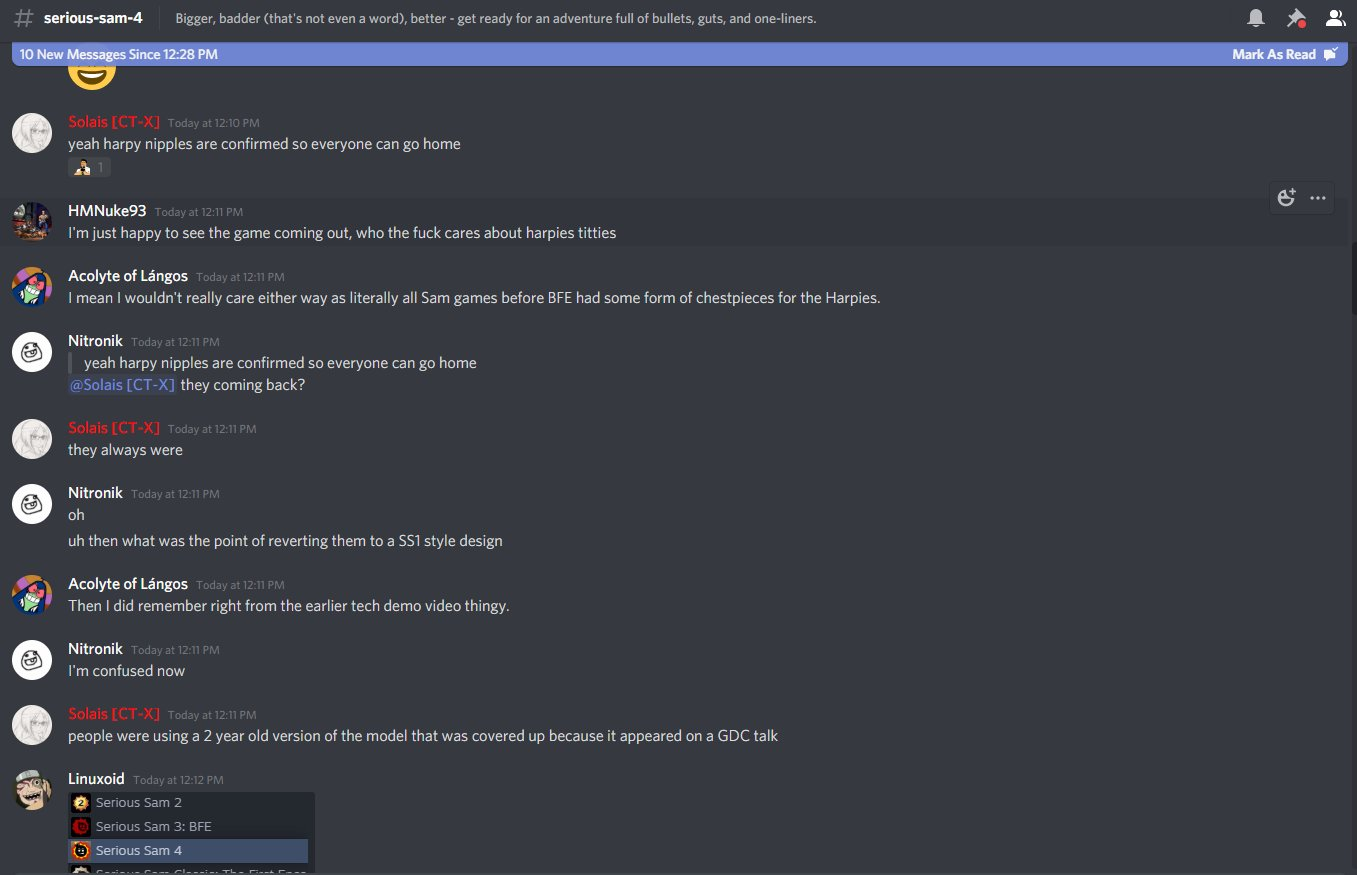 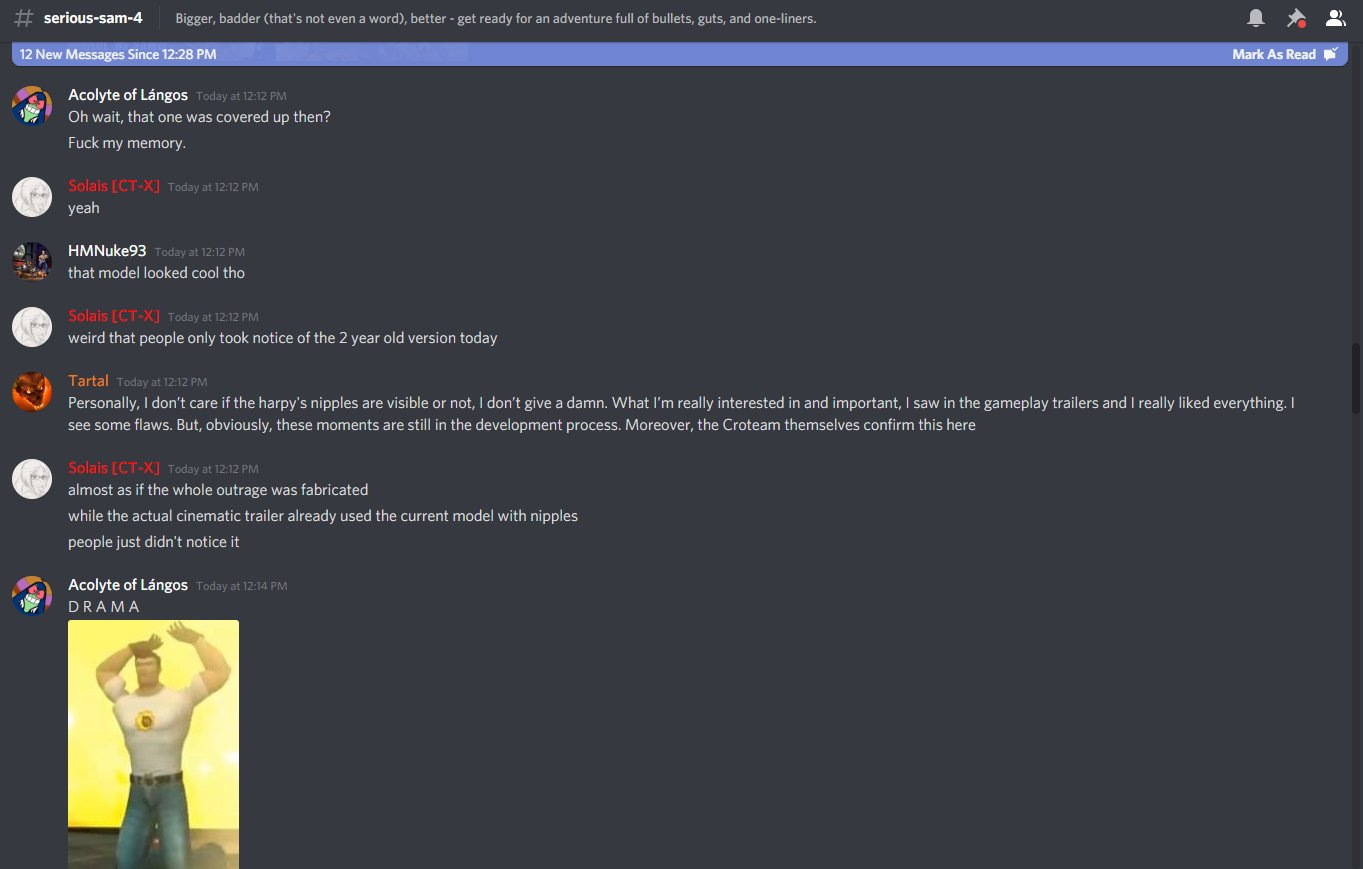 If you’re unable to view the images or the text therein, Solais explains…

“Yeah harpy nipples are confirmed so everyone can go home. […]

“People were using a 2 year old version of the model that was covered up because it appeared on a GDC talk. […]

“Almost as if the whole outrage was fabricated while the actual cinematic trailer already used the current model with nipples[,] people just didn’t notice it.”

The model of the censored version of the Scythian Harpy actually comes from a video that was published on April 30th, 2020 by YouTuber FireDragon. You can view it below.

So a video that was a month old was actually using a model that was two years old.

Given that FireDragon’s video was the most recent video showing an in-game model of the Harpy, most people assumed that was the model that would be used in the actual game.

In the Steam thread, some people did post images of the cinematic version of the Harpy, but due to how blurry it is, it was difficult to tell if it was just for the cinematic or if the model was actually going to be used in the game. 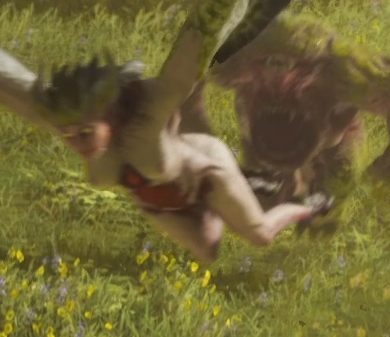 It also appears as a “blink and you missed it moment” in the actual trailer.

For those wondering, you can check out the cinematic below.

Before Solais came to clarify the situation, matters were confounded when Croteam’s Danny originally claimed that there were better places to look at “gazoongas” when he was asked about the censorship. He later said that “boobs brought nothing to the game”…

“No, the design was changed because it was changed. There’s no deeper meaning here. Those naked boobs brought nothing to the game, and when our designers were creating a new model they were just trying to make their vision into reality as close as they could. Boobs or not.”

Furthermore, when gamers suggested a toggle for a topless/covered version of the Harpy, Danny claimed that the artists were already stretched thin and were already focused on other characters, writing…

“It would require additional work that was instead focused on a different character. At this point we only have two character artists, and they are already stretched too thin.”

When pressed even further about about the censorship, Danny stated that the change to the Harpy’s design was the artist’s decision, and basically attempted to run defense for what people perceived to be censorship, saying…

“Where did I say it was censorship? 🙂

“I said it was a design choice that had nothing to do with showing or not showing boobs. I’m guessing the character artist felt this looks better. Even the concepts for the harpy didn’t have fully exposed boobs. […]”

Well, it turns out that the Harpy will have fully exposed boobs, according to Solais.

However, I think it would probably be prudent to wait for further evidence that the game is uncensored before taking anyone at their word.

Also, all of this could have easily been avoided had Danny simply not responded with condescension and instead said something like “Let me check with the artists to confirm if the Harpy will be topless”. That would have spared everyone needless drama.

Now we have conflicting statements and we’ll have to wait to see which one turns out to be true when actual gameplay footage surfaces.

You can keep track of the game at the moment by visiting the Steam store page, where it’s currently scheduled to release in August.

(Thanks for the news tip Mordekai and the Guffys)