The DMCA and copyright abuse measures being applied by Sony and Naughty Dog would be reaching comical heights if it weren’t so depressingly sad how legally immobile and civilly hand-tied majority of the victims are of the duo’s machinations to prevent spreading of any information regarding The Last of Us: Part II leaks.

The latest shenanigans that Sony and Naughty Dog have been up to involve using copyright claims to take down memes from Reddit.

There’s a post over on KotakuInAction 2 about how a user had his meme removed even though it was a GTA V parody mimicking the events that take place in The Last of Us: Part II.

In the thread KoshkaRusalka explained….

“I got a copyright notice from Naughty Dog because I posted a meme, made in GTAV, that spoils The Last of Us 2 on a satirical drama subreddit. No actual content from the game is used in the meme.” 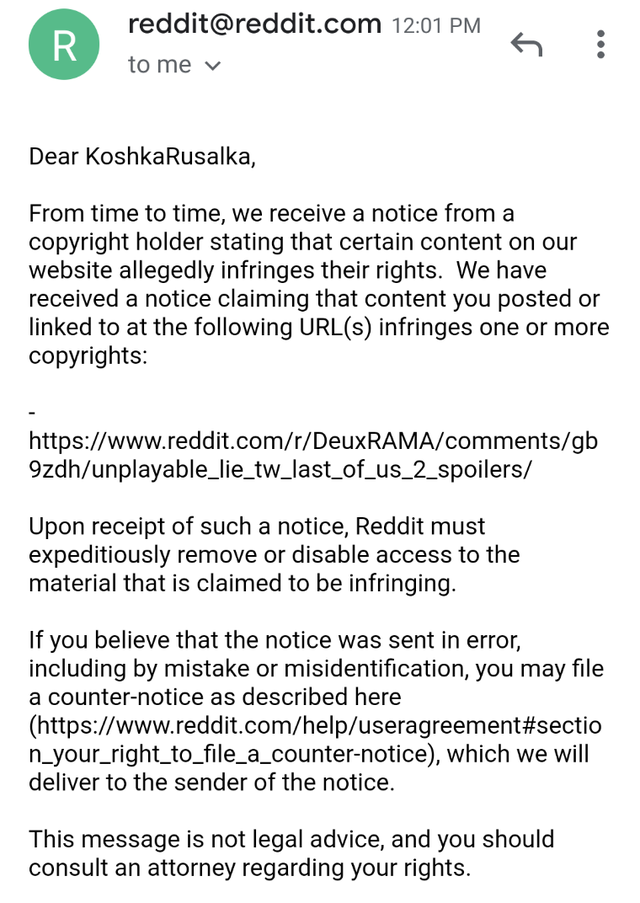 Various YouTubers have also been hit by the DMCA claims and copyright strikes just for talking about the censorship surrounding the leaks.

Ryan Kinel did a video about his content being copyright struck even though he didn’t include any of the leaked footage or images in his content.

Other YouTubers such as Mr. H Reviews were also impacted by Sony’s aggressive censorship measures.

He posted up a near 20-minute video discussing the copyright strikes going around and how Sony is effectively attempting to silence anyone from discussing one of the most controversial SJW games in recent times.

A bunch of mainstream and large enthusiast websites have been covering for Naughty Dog and defending them, placing blame on the leaker and the people who viewed the leaks.

As is typical, gaming media is running defense for the corporate overlords.

However, websites that aren’t running defense for Naughty Dog are also being impacted by Sony.

Bounding Into Comics received a DMCA notice from Sony’s Muso legal representation requesting the removal of their articles from the website containing what they claimed was “infringing” material.

In the article they explain…

“On April 29th, we received an email from Dariana Hosu from Mosu TNT Ltd on behalf of Sony Interactive Entertainment requesting our entire article covering the leaks be taken down.

“The email read in part, ‘I hereby demand that you act expeditiously to remove or disable access to the material or items claimed to be infringing.’

“On April 30th, we would receive a follow-up email from Ovidiu Suteu of Muso TNT Ltd requesting the article be removed.

“That email read in part, “We would appreciate your prompt action in having the following list of files removed in accordance with their original DMCA notices.”

“At the time of the second email, other leaked footage showing short clips of gameplay had already been claimed on Twitter.

“Even with the videos showing the leaked footage already unviewable, they demanded the entire article be deleted. It has not been deleted.”

Some YouTubers noted that they were contacting their lawyers and would be counter-suing if the copyright strikes weren’t removed.

This could open a nasty legal door for Sony if some content creators decide to not only push back by standing their ground in hosting criticism and commentary about the leaks, but also going on the offensive by suing Sony for disrupting their business by abusing the Digital Millennium Copyright Act.

Meanwhile, Sony and Naughty Dog have been trying to remind people that pre-orders for The Last of Us: Part II are currently live and that the game will launch on June 19th exclusively for the PS4.

(Thanks for the news tip KotakuInAction 2)