[Update:] The full list for the Traitors of America can be found here.

[Original article:] Both Sony and Funimation have tweeted out support for #BlackLivesMatter, a riot-enabling organization that has helped criminals and looters cause untold amounts of property damage, deaths, and looting.

On May 31st, 2020 Sony posted a three-part tweet leading with the hashtag #BlackLivesMatter, despite the fact that the group has helped enable the people responsible for burning down America at the moment with looting and arson.

Right now, we want to use our platform to spread information & support. Please send links, resources, or other helpful information our way, and we’ll share them.

One user attempted to correct Sony by saying “all lives matter”, especially since saying #BlackLivesMatter is exclusionary and racist.

Yet, Sony defended their stance, which enables racism against whites, by tweeting the following.

All lives will not matter until Black lives matter.

There were some fairly appropriate responses to the racism on display by the corporate giant.

Unfortunately, Xbox is not a safe haven from sociopolitical degeneracy. They’ve teamed up with GLEAM to add more LGBTQIA+ propaganda to their games, and also don’t believe in free speech, which came right out of the mouth of the head of Xbox, Phil Spencer.

What’s more is that Phil Spencer even retweeted Sony’s race-baiting propaganda. As of May 31st, 2020 it’s the top tweet on his account. 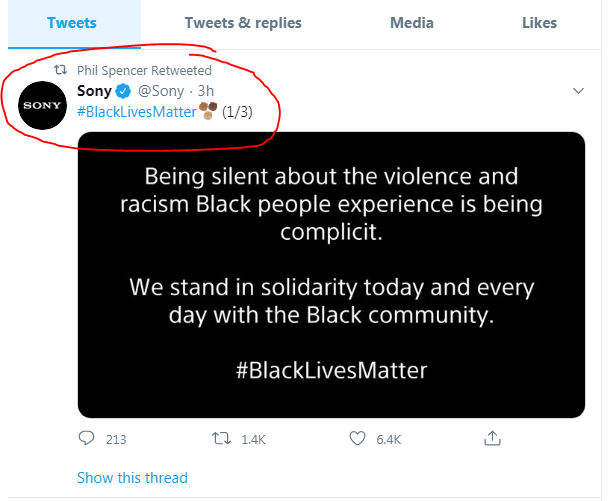 But Sony wasn’t the only one riding the pale horse into the brimstone of the upcoming civil war. Sony’s subsidiary, Funimation, also chimed in to show their support for an organization enabling the riots.

We believe in our anime community, in the rights of those in our community, and we believe that #BlackLivesMatter.

On the bright side, plenty of people are standing up to Funimation and showing their support for justice by stating that if Funimation will support riot-enablers they will cancel their subscription to the service.

We believe in our anime community, in the rights of those in our community, and we believe that #BlackLivesMatter.

Worse yet is that impressionable role models like professional wrestler Randy Orton, who works for the WWE, also jumped in to support the riot-enablers, much to the shock of people who thought Orton knew better.

Some people tried to correct him in explaining that “all lives matter” and repeatedly flooded his replies to get the pro-wrestling superstar to understand that he was wrong for what he tweeted, but betrayal was the name of the game, and Randy was playing to win.

All lives DO matter, but the point I was trying to make is that I finally realized that until #BlackLivesMatters, they can’t. Get it? https://t.co/KSf6VkMINq

NetherRealm Studio head and Mortal Kombat 11 executive producer Ed Boon also joined in on the fray, creating division and discord by tweeting out his support for the enablers of riots.

Even YouTube content creators like KSI were encouraging people to engage in criminal behavior, but later had to walk it all back as the violence and killings escalated.

Memology 102 posted up a quick video to give you a rundown of the civil war-enabling tweets that KSI put out.

Basically, these companies and so-called superstars are turning their backs on America, aligning with groups that enable rioting, looting, criminal behavior, assault, theft, and worst of all… murder.

That’s right, a man was murdered in all the rioting, as reported by ABC 7.

That’s not to mention all of the vandalism and destruction criminals are engaging in across the country thanks to being enabled by groups like #BlackLivesMatter and corporations like Sony.

This is what they’re supporting.

Apparently to Sony, Funimation, and celebrities like Randy Orton, some lives matter more than others.

(Thanks for the news tips LC, Master Nemesis, substra2se, The Embodiment of Madness, Centrists=RebrandedSJWs, KotakuInAction 2 and Hack25)