Original games are hard to come by these days, mostly because a lot of larger studios are more concerned with propaganda than making actual games. Jaw Drop Games is working on a game that might seem derivative, but actually seems somewhat cool insofar that Deathground is a game where you’re in the role of hunters at a facility where dinosaurs are present. Unfortunately for you, the dinosaur has escaped.

The core of the game centers around the team attempting to escape from the facility while AI-controlled dinosaurs hunts down the players.

It’s still a typical asymmetric horror game, but the highlight is that it can be played solo in a single-player mode or cooperatively with other players.

Basically it’s another Deathgarden or Dead By Daylight.

Even though the basic tenet may be derivative, the idea of playing through a horror-themed game where you’re collecting resources and attempting to escape from a place overrun with dinosaurs is kind of cool.

A lot of the potential success for this game boils down to the execution of its concept, though. 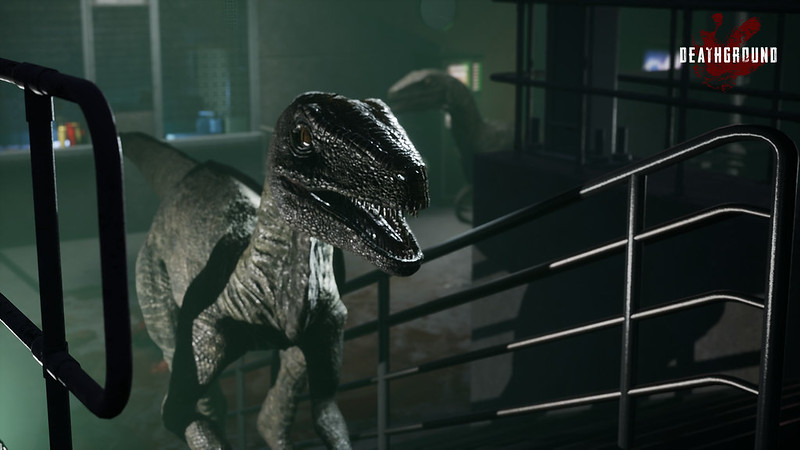 Visually it looks okay and from an objective standpoint you’ll have different missions either solo or as a squad to complete.

To help make things a little spicy you’ll also have to deal with random events in the game and dynamic weather changes.

The core function is to retrieve loot, avoid getting eaten, complete the objectives, and then escape the level.

There will be items and weapons you can craft to help aid you in survival against the dinosaurs.

This one can go either way, but if you’re interested in the game you can check out the Kickstarter page where it currently has 26 days to go before it wraps up. They’re already 43% of the way there. You can also wishlist or follow the game on the Steam store.