In what many are calling the nicest day on Twitter, a severe hack forced the company to put all verified accounts into lockdown until ownership could be ascertained. Prior to the lockdown, Twitter was ousted from their internal systems for over five hours as accounts were hijacked and used to promote a bitcoin scam.

At least that is the part the media is talking about. The accounts also began dropping red pills concerning Bill Gate’s involvement with the development of Covid-19 among several other conspiracies the media would rather not discuss.

Right now, details on what exactly transpired are vague with details far and few between. What is known is after 3:30 pm, the attack targeted several prominent figures in politics and business. After which the perpetrators used the opportunity to scam people out of bitcoin and post as previously stated information, the media has carefully kept out of the public discourse.

From this hack, we did learn a few things, and details are coming out regarding who was behind the attack but not why. 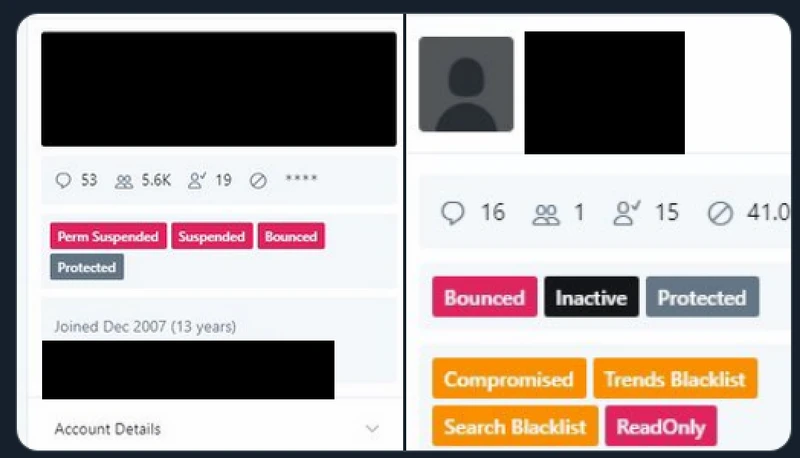 Previously Twitter claimed the company doesn’t have blacklists. During the hack, the admin control panel was leaked in several screenshots, revealing that not only does Twitter have blacklists, but they actively manipulate feed appearance. What goes overlooked is the option to create a protected class of people who will be safeguarded from disciplinary action.

Innumerable times a topic the left doesn’t like has been trending when all of a sudden, it disappears. Not organically as people grow tired of the topic or move on to more pressing issues, but instead, the trend sees a near-instant cessation and drops off Trending. Unsurprisingly that is because Twitter administration tools allow Twitter staff to dictate the public discourse through blacklisting and removing trends.

At present, the reality is we do not know who was actually behind the hack. What we do know comes from a series of sources that spoke to the New York Times, giving statements that have been corroborated by Twitter and other sources.

This all started, according to the sources, when a group of hackers from Ogusers.com were approached on Discord by a man calling himself Kurt. His account wasn’t old; it was set up on July 7th, but he claimed he was a Twitter employee and boasted about how he could seriously mess the company up.

After engaging with him for a while, two things became apparent. This man was definitely not a Twitter employee, but he did have complete access to the same tools they did. What he needed of the four was go-betweens to sell accounts he was hijacking on ogusers.com. As they were familiar with the site and known the community, they would have an easier time selling the accounts.

The four agreed to participate in the operation and sell the accounts for Kurt, but claim they had nothing to do with the high profile hijackings that occurred after 3:30 pm. It should be noted these are not elite hackers. These are individuals in their teens and early twenties, one of which still lives with his mother.

According to the Time’s coverage, these individuals have previously failed to hack two companies. The central figure in this is the mysterious Kurt, who has seemingly vanished overnight.

According to famous hacker Joseph O’Connor, alias PlugWalkJoe, Kirk gained access to Twitter’s systems after he found a way into the company’s internal slack messaging channel. When combined with an unspecified service, he was able to gain complete access to Twitter’s administration tools.

According to sources inside Twitter that spoke to Vice under conditions of anonymity, the hack was facilitated by a compromised employee. At present, it is unknown whether this person was bribed, coerced, or acted on ideological reasons.

There isn’t anything conclusively pointing to one theory or another. What is known is the hack is too sophisticated to have been purely for account harvesting and a bitcoin scam. Until further information comes to light, the possibility remains that it was done for precisely that reason. Here are the other potential reasons.

The most prominent theory is this was done to harvest sensitive political and economic information from Twitter DMs. Along with accruing evidence of illegal activities that could later be used to blackmail certain people.

This theory is so prevalent the mainstream media has been forced to mention it in their coverage offhandedly. Albeit, they choose to represent it as an unknown whether Kurt gained access to DMs and what he saw.

Largely this is an observation on my part combined with previous behaviors from the media, so take it with an extra grain of salt. Anyone who pays attention to the media and how they operate is likely familiar with the concept of “Problem, Reaction, Solution.” Typically it is falsely attributed as Hegelian Dialectic -which is thesis, antithesis, leading to synthesis –, but is an oft used tactic by political, economic, and media elite to push a desired change or narrative forward.

It works on the simple principle of creating a problem, be it real, exacerbated, or entirely fictional. Then when people react to this problem, you provide them a solution, which is your desired ends. For example, the media perpetuates that there is systemic oppression of African Americans. This, in turn, leads to anger from that community, and the Democrats then offer the solution of voting for them.

As of late, there has been an increased discussion in the media regarding cancel culture and specifically how toxic Twitter is as a platform. A pivotal moment in this was the signing of the anti-cancel culture letter by several members of the media. Who were then met with the exact behavior they described from Twitter and their colleagues.

To society, which largely doesn’t use Twitter, the platform is presented as the source of the toxicity and cancel culture that has permeated our society as of late. Note academics who brainwashed children, it isn’t scientists who lie for political clout, nor is the elite class who increasingly looks at the public with disdain that are presented as the source of cancel culture. That is like blaming the spot on your skin for the cancer inside your body.

Now comes what appears to be a planned operation to hack and potentially gain sensitive information from prominent people. Demonstrate as it does so, that Twitter is not safe to be on if you are influential.

That isn’t to say the hack was done purely to create this impression. Instead, it is an instance of killing two birds with a single stone. The operation generates revenue from bitcoin, it gains sensitive information and spreads information to the general public, and it also demonstrates the platform isn’t safe.

Infrequently brought up, but a theory nevertheless, is the idea this was done in retaliation for the repeated, systematic censoring of conservatives and right-leaning individuals. This gains some credence as most of those targeted during the attack were prominent left-leaning individuals, but the attack was not exclusive to them.

Typically in attacks of this nature, the individuals responsible want people to know why it happened. Even if they do not directly claim responsibility for it, they want those that have wrong them to know they can retaliate and will do so.

Arguably this is the weakest theory, but it is difficult to rule out political motivation as part of the underlying motive for the attack.