(Warning This article contains minor spoilers for Redo of Healer)

Christmas came early this year with the announcement that Redo the Healer would get an anime adaptation. Redo of Healer, or as it is known in Japan, Kaifuku Jutsushi no Yarinaoshi, is a series that started as a light novel before being adapted into a successful manga. Similar to Shield Hero, the main protagonist experiences an insane level of hardship before realizing he can use his healing magic to reset the world by four years. Granting him the opportunity to right the wrongs he experienced and witnessed.

At this point, you may be wondering what could possibly have the perpetually offended up in arms. To put it succinctly, Keyaru’s vengeance is rather brutal. One character who raped him after he was raped, drugged, and abused by multiple people, including a male hero, he rapes before altering her memories, so she will never even know she was raped.

This has, according to reporting from Sankaku Complex, sent the Anime New Networks CEO, along with the outlet’s Chief Editor into a preemptive censorship and gaslighting campaign. 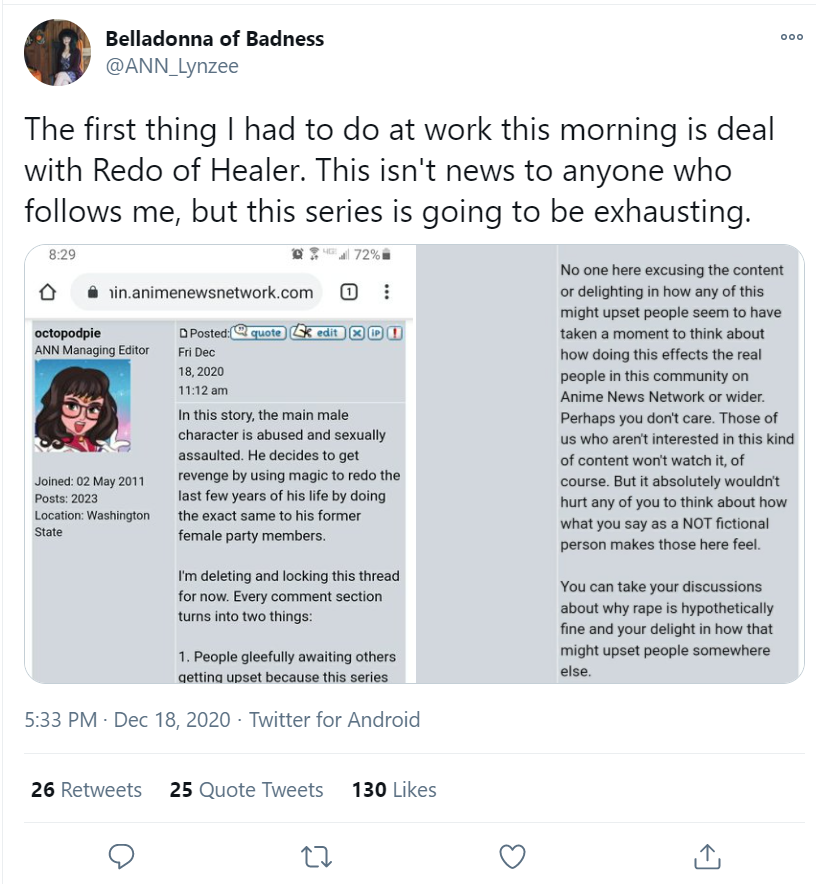 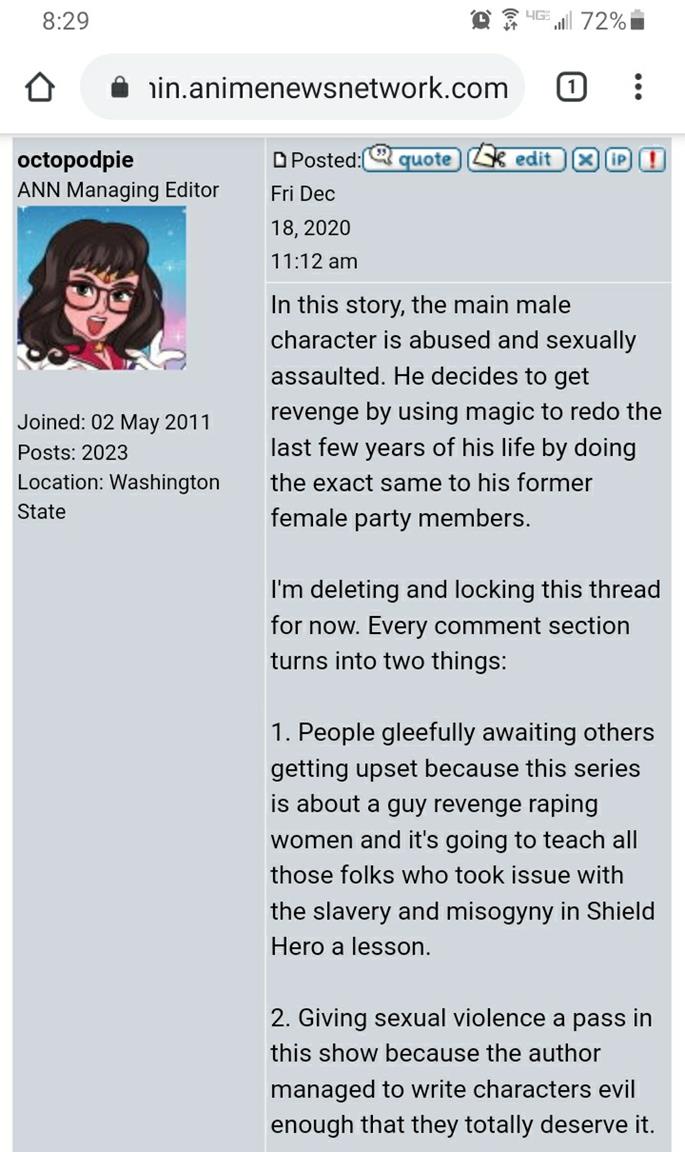 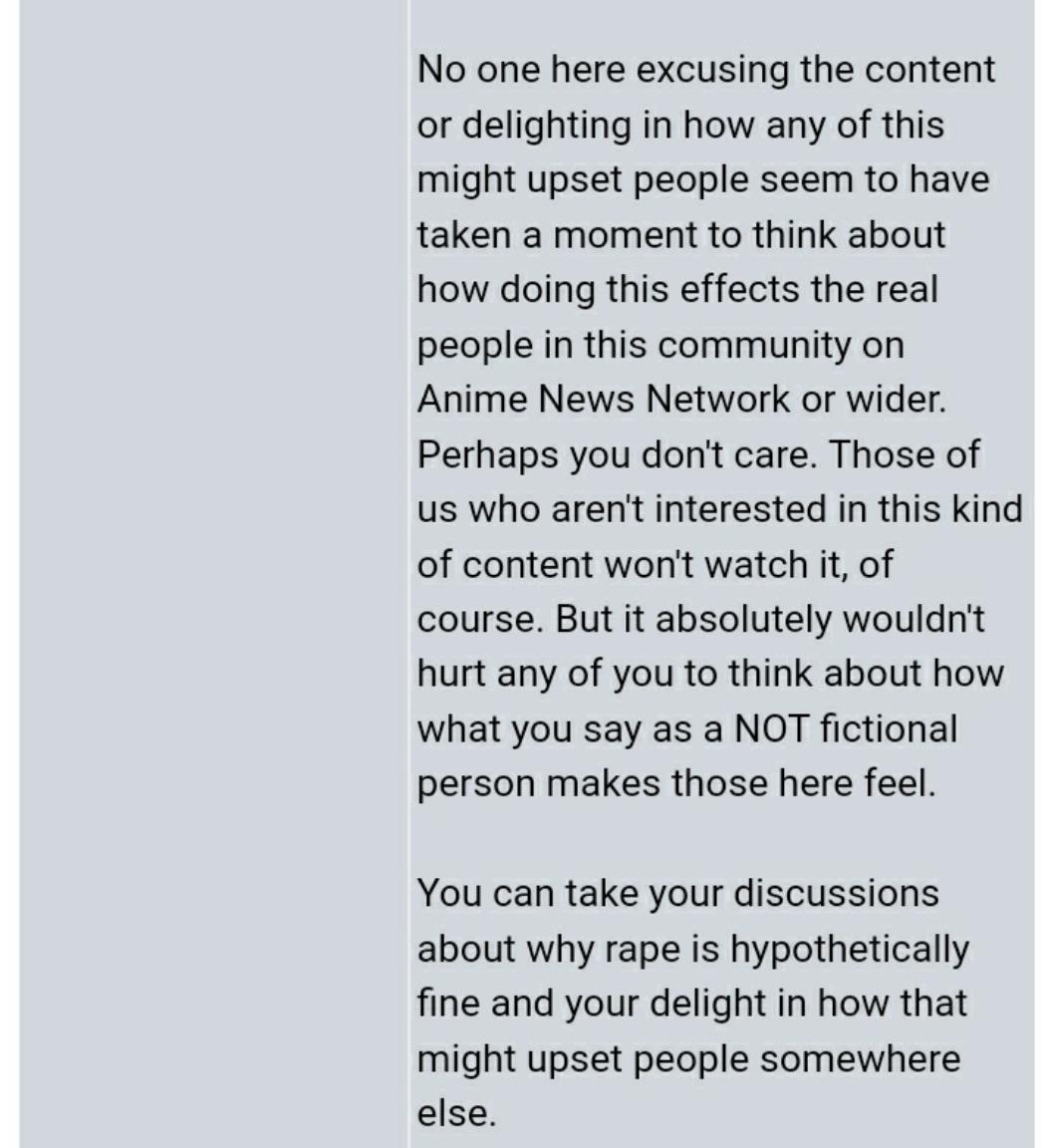 This series is certain to cause a lot of controversy, and Anime News Network welcomes and encouraged discussion of this anime and even the social issues that it touches upon. However rape is never an acceptable punishment and we will not tolerate any posts that even remotely suggest that it is.

Furthermore we will not tolerate posts that take glee in the controversy that this show is likely to cause, nor will we tolerate any posts that appear to be trollish or baiting in nature.

Finally, we ask that all posters be considerate of those who may read these threads and have past traumatic experiences.

Failure to abide by this will result in immediate and permanent removal from our community.

Discussion or criticism of this policy may be made in the feedback forum.

As for the controversy the series has generated, it is not for everyone. As previously stated, the protagonist gets revenge in some pretty heinous ways. To such a degree it is perplexing how this show got greenlit for an official anime release and should raise concern if the series will dumbed down the plot as Shield Hero previously did.

What Anime News Network is not telling you is the people he gets revenge on are absolutely despicable. In particular, the two princesses of the kingdom delight in raping, drugging, and breaking the main character in the original timeline. Flare, the first princess of Jioral Kingdom, uses the main character as a pack mule. When he is not carrying their stuff, he is a literal training dummy for her lackeys. She routinely beats him and gets him addicted to a drug that he has to do tricks like a dog if he wants access.

Her sister and second princess of the Jioral Kingdom was considerably nicer to Keyaru. Only raping him after witnessing her sister didn’t entirely break him. Don’t mistake her for anything approaching decent. During their war with the Demon Lord, she poisons a captured city and orders three others to be burnt to the ground by her sister. All that to hinder reinforcements that might arrive and liberate the cities.

Also on display is a homosexual who rapes and abuses both men and women. Alongside him is a pedophile who, when his victims become too old, kills and taxidermies them. Preserving their youthful beauty for all eternity.

Perhaps if they were not ignorant of the source material, they would be aware that both Shield Hero and Redo of Healer take staunch anti-slavery stances. In the latter, slavery and abuse become the driving point of the ongoing hostilities between demi-humans and humans. Naofumi’s need for a slave makes vastly more sense in the original print and manga as his life is considerably worse and mistreated. Placing him in a position where his only option is to have a partner who will not question his commands. Without spoiling what will happen in Redo of Healer there is an entire arc involving slavery that ends in spectacular fashion.

If the anime adaptation sticks true to the source material, Christmas will indeed have come early. Like Shield Hero, it tackles serious issues from a male perspective without sugar-coating the world or his driving motivations. If it succeeds, it will demonstrate a market demand for more mature works, so publishers will be less likely to shy away from “controversial” works. As a bonus, it’ll rile up the perpetually offended who will be unable to do anything about the series success—a triple win.

The Australian Classification Board has refused classification for several volumes of the light novel No Game, No Life. Before anyone assumes that the entire brand has been banned, if you search the Australian Classification Board’s website you’ll find that you can still purchase the DVDs for No Game, No Life, two of which have been rated, just not certain light novel volumes. However, it probably won’t be long before the OVAs are targeted. END_OF_DOCUMENT_TOKEN_TO_BE_REPLACED

We tried to warn you. It started with the censorship of big anime boobs in video games, escalated to light novels, and now it’s evolved to mangas. More specifically, seven manga series have been banned from Kinokuniya Sydney’s physical retail outlets and their online shops following a complaint from South Australian legislator Connie Bonaros, who claimed that the mangas contained “child grooming” and “child pornography”. END_OF_DOCUMENT_TOKEN_TO_BE_REPLACED

Even more light novels and mangas have been banned from Amazon — who is on the Traitors of America master list — following up on the e-tailer purging their stock of No Game, No Life and M Next Life As A Villainess. According to J-Novel Club, Grimgar of Fantasy and Ash has been banned, along with The Greatest Magicmaster’s Retirement Plan, I Shall Survive Using Potions, How Not to Summon a Demon Lord and Clockwork Planet. END_OF_DOCUMENT_TOKEN_TO_BE_REPLACED

As of recent, two websites have received word from multiple Tencent employees discussing how the Chinese mega-conglomerate wants to target Japanese anime and manga to bolster its portfolio in the foreseeable future. END_OF_DOCUMENT_TOKEN_TO_BE_REPLACED

Back in March, Japanese politicians proposed an amendment to the anti-online piracy law that would extend its demarcation from audio and video to mangas and magazines. Well, recently the measure moved forward and now starting January 1st, 2021 you will be punished if you’re caught illegally downloading copyrighted manga in Japan. END_OF_DOCUMENT_TOKEN_TO_BE_REPLACED

Irodori Comics’ On Takahashi is probably best known for being quite vocal against pirate groups. He was one of the prominent voices championing the shut down of groups like Manga Rock back in August of 2019. However, some digging by manga fans uncovered that one of the translators working on the English translations of The Testament of Sister New Devil for an unlicensed group is none other than On Takahashi. END_OF_DOCUMENT_TOKEN_TO_BE_REPLACED

MangaStream and Jaimini’s Box are no longer offering scanlations of manga, following a copyright sweep by Japanese corporations this past summer and fall. MangaStream’s site is completely down, whereas Jamini’s Box will only work on web toons and original work from here forward. END_OF_DOCUMENT_TOKEN_TO_BE_REPLACED

It’s not looking good for manga and anime enthusiasts. A South Korean court has recently overturned a lower court decision by claiming that the depiction of “teenagers” in explicit anime or manga is considered child pornography, and therefore is child abuse. END_OF_DOCUMENT_TOKEN_TO_BE_REPLACED

Social Justice Warriors attempted to scuttle the blood drive by Japan’s Red Cross organization because it featured the super sexy Uzaki-chan from the ecchi manga Uzaki-chan Wants To Hang Out!. However, the efforts from the no-fun-allowed police was stamped out by the Red Cross in Japan, who promptly noted that while the protests of uzing Uzaki-chan was noted, they would continue to partner with anime and manga companies in order to bolster the appeal of blood drives, which has been a huge success for them in the recent past. END_OF_DOCUMENT_TOKEN_TO_BE_REPLACED

The United Nations Committee on the Rights of the Child is moving forward with the initial proposal they put forward back in February of this year. The proposal included a number of suggestions to member States to improve their efforts to curb the exploitation of children. One such suggestion included the ban of fictional drawings and virtual material that contained non-existing persons. END_OF_DOCUMENT_TOKEN_TO_BE_REPLACED

The English translation of the Edens Zero manga in Germany appears to be censored. Some users have posted up the scans of the translated version that was released through the official distribution channels and a panty-stealing scene from Chapter 54 of Edens Zero has been completely censored in the official release. END_OF_DOCUMENT_TOKEN_TO_BE_REPLACED

YouTube channel MangaExplained has been cataloging and reviewing manga for some time. He had over 500 videos covering all different kinds of manga from a wide swathe of different artists and companies. However, some Japanese rights holders have been cracking down on manga reviewers lately, and many of MangaExplained’s content was hit hard, especially from Square Enix. END_OF_DOCUMENT_TOKEN_TO_BE_REPLACED