A Nordic adventure into mental illness. That’s the theme for the upcoming hack-and-slash, third-person title from Ninja Theory for the PlayStation 4 and PC. The game will see players assuming the role of Senua as she attempts to cure herself of… mental illness.

As mentioned on the PlayStation blog by Dominic Matthews, the product development manager at Ninja Theory…

“Senua experiences psychosis, including hallucinations and delusions, as well as suffering from anxiety and depression. As a player you will witness Senua’s living nightmare through her own eyes.”

You can see that “living nightmare” come to life in the trailer below.

It kind of reminds me of The Suffering, another game that dealt with mental illness, schizophrenia and psychosis. The only difference is that The Suffering didn’t really make it blatantly known that you were going through any sort of mental illness as Torque. The game was more about indulging players in an atmosphere where the questions of reality were challenged and you were left to decide what was really going on.

Hellblade seems to want to explore the opportunity of diving into a game where you attempt to solve Senua’s hell.

The gameplay clip is light on actual gameplay, but it looks like you move along a path and fight various nightmare creatures on a quest to rid the main protagonist of her psychosis. Although, this seems like one of those games where “curing” Senua isn’t really on the table. 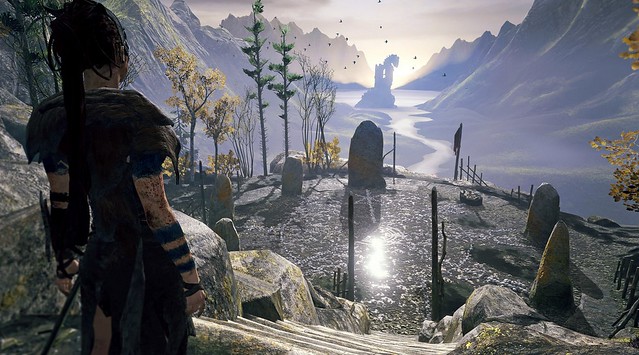 It’s hard to tell what the sword play will be like, we only see it in action in a fleeting way and only ever-so-briefly. While story is nice and all, let’s hope that Ninja Theory ensures that there’s a nice chunk of in-depth combat mechanics that players can sink their teeth into.

Hellblade is due for release in 2016 for the PlayStation 4 and PC. The team of 15 – yes, only 15 people are working on the game – are hoping to deliver an AAA quality experience using independent gaming techniques. You can learn more about the game by paying a visit to the official website.