Playing as an astronaut trapped in deep space within a mysterious object hurdling towards Earth, players are tasked with deconstructing the cube using logic puzzles and a bit of observational wit. That’s the core of Toxic Games’ Q.U.B.E. Grip Games recently re-released Q.U.B.E. Director’s Cut for the PS3 and PS4. The Wii U and Xbox One versions are inbound soon. For console gamers just getting acquainted with the title, there is a complete gameplay walkthrough available to help you out with a few of the more complex and brain meltingly difficult puzzles featured throughout the game.

Q.U.B.E. was one of those games that originally came onto the scene with some fair praise and some equal criticisms for some glitches and a bit of rough spots around the edges. The Director’s Cut of the game is basically the more refined rendition of the title that originally started as a student project using the Unreal Development Kit.

As for the walkthrough, it offers hints and visual tips for getting through of the sectors in Q.U.B.E. You can check out the complete walkthrough below courtesy of YouTuber Asuveroz.

For those of you having a tough time remembering what each box does, the basics are as follows: The red boxes can be pushed in and out or up and down. The blue boxes can be pushed in, but when an object touches the blue box it works as a spring. The yellow boxes extend and retract as step ladders, usually in succession of threes.

The giant counter-clockwise button will reset all the boxes in a scenario. The green button with an arrow on it releases a ball. The purple buttons rotate specific segments around clockwise or counter-clockwise. The blue and white magnet buttons pull blocks toward their direction. You can stop blocks in mid-pull by pressing the magnet button for a second time.

Some of the more difficult segments in the game are the ones that rely on manipulating moving objects to do your bidding, like guiding the balls around. 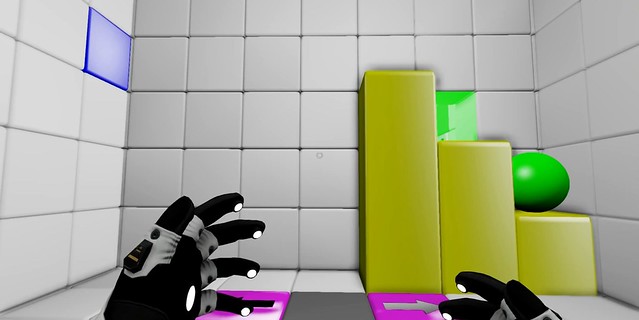 One thing to keep in mind is that the ball will oftentimes move in the appropriate or desired direction once you put it in the proper place. So if you align it in front of a green entryway, it will oftentimes go inside on its own. It’s just a matter of getting it aligned.

The game is actually pretty short, capable of being completed within just a couple of hours. However, the difficulty of the puzzles might send some players into a frenzy due to their difficulty. Thank goodness for a walkthrough guide, eh?

Q.U.B.E. Director’s Cut is available for the low price of $9.99. You can learn more about the game if you don’t already own it by hitting up the official website.