SCS Software have announced that they are expanding beyond Euro Truck Simulator and they will be taking on the great highways, back roads and expressways of North America with American Truck Simulator. The game was announced recently along with a new trailer coming out of GamesCom 2015.

VR Focus spotted the new trailer since the game was announced to have some sort of VR capabilities. SCS Software did not detail what the exact kind of virtual reality headsets will be supported or how they’ll be incorporated into the American Truck Simulator experience, but rest assured that the details will likely be made publicly well before the game launches. You can check out the trailer for the game below.

The fan response for this trailer and this game is kind of unprecedented for a simulator all about mimicking the virtual experience of what people get paid to do 24/7 in real life. A previous demographic chart showed that Germans really, really love their simulators so it’s no surprise that maybe they’ve grown tired of driving simulated trucks in Europe and now they want to drive simulated trucks in North America. 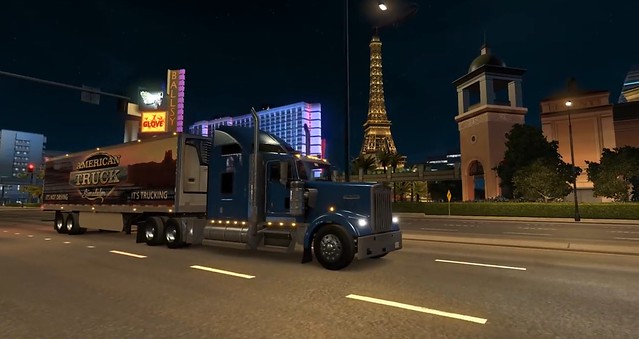 That’s real ballsy of SCS Software having a giant sign for a casino named “Ballsy”. They should watch their Twitter for someone who feels oppressed and offended because being “Ballsy” and driving big trucks is a sign of the patriarchy.

Back in reality, most gamers’ biggest concern is whether or not they have a rig that can handle the (oftentimes unoptimized) gameplay and graphics of SCS Software’s Truck Simulators. Some mentioned that they can run Battlefield 4 at above 50fps but only get 15fps through 30fps on Euro Truck Simulator. So we’ll see if SCS has optimized the crap out of American Truck Simulator so it doesn’t slow down gaming rigs like Megyn Kelly slowed down Donald Trump’s momentum at the Republican debate by giving outrage media enough click-bait material to last until the Primaries.

You can learn more about American Truck Simulator by paying a visit to the official website or by checking out the Steam store page.