Persistent MMOs where players can actually gain and lose everything are very rare in today’s market. Very few games actually allow and promote persistence when it comes to building an entire kingdom only to see it lost to fire and brimstone during an intense PvP match. CivCraft: Legends of Ellaria, an upcoming sandbox role-playing strategy game will allow players to build, defend and destroy kingdoms all taking place in a persistent medieval universe.

CivCraft will feature RTS combat, hack-and-slash combat for those who like to get down and dirty on the ground, resource management, diplomacy, questing, magic skills, custom town and castle building, as well as the ability to wage war against rivals and destroy any and everything that stands in the way.

The game is currently on Kickstarter, and at the time of the publishing of this article it has surpassed its basic goal of $12,500 by a significant margin. The developers, Larkon Studio, are currently striving toward hitting the stretch goals as they prep for the game’s release on Steam Early Access. They’ve already managed to get Greenlit for Valve’s service so it’s one hurdle down and just a few more to go.

I had an opportunity to throw a few questions toward game designers Arik Helman and Adrian Tache from Larkon Studio, discussing some of the mechanics of building a kingdom in CivCraft, as well as acquiring siege weapons to tear them down. The game allows players to engage the game either down on the ground like Mount & Blade or command diplomacy and war using RTS and 4x strategy elements. The combination of different gameplay elements, the PvP and the fact that it’s an indie game really piqued my interest. You can check out the full interview below.

One Angry Gamer: CivCraft has managed to do fairly well on Kickstarter and has even surpassed its initial goals. What’s your take on the performance of the Kickstarter and do you think it’s doing better or worse than what you expected from it?

Larkon Studio: We are very delighted from what we achieved so far and we’re aiming to hit the 50K (Arch Mage & Immersion level 1) goal. Since CivCraft is in a Pre-Alpha (Early Access), our Kickstarter campaign is meant to gain a strong community of gamers who will get to play CivCraft several weeks after the end of our campaign and give us feedbacks and suggestions about our concept. Our Kickstarter campaign also allowed us to add features to our initial release, such as an espionage pack, siege weapons, graphics and sound. We’re very happy with the results so far.

One Angry Gamer: It’s mentioned in one of the promotional concept videos that siege weapons would make it into the game if the stretch goals were met… well, the stretch goals were met and gamers are obviously looking forward to those tools. Will players have to craft those items or will they be accessible through NPC vendors or will they be built through special facilities that produce siege weapons?

Larkon Studio: A siege weapon can be built in a workshop and requires skilled workers, resources, and the appropriate technology. However, siege weapons can also be bought in markets or as part as mercenaries arsenal. With the proper technology, some of them can be crafted on the field.

OAG: In terms of the game’s competitive multiplayer… will players be able to lose everything if a rival faction comes in and completely levels their city or will there be a checkpoint of sorts where players can reload their town and character if everything gets destroyed? Basically, how persistent will the game world be in regards to multiplayer?

Larkon Studio: In multiplayer, players won’t be able to “reload” their city, unless the server reloads a backup. Since multiplayer is both persistent and has several player owned kingdoms, a lost city is indeed a lost city. However, each player owns a land, and depending on server rules, a player who lost his kingdom may move to a faraway land, rebuild his kingdom, and return with a new army, newly met allies, and a strong intention for vengeance. CivCraft’s multiplayer will allow both kingdom politics and events, large scale wars, and the ability to visit another player’s kingdom and explore his/her land. 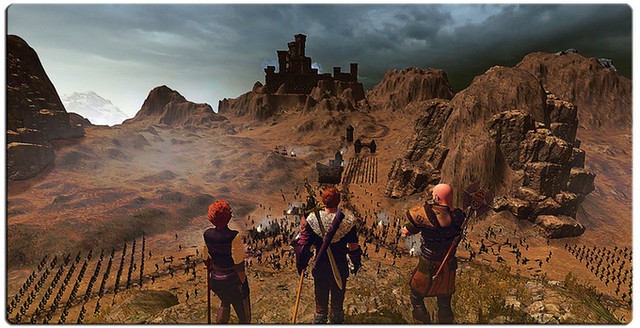 OAG: It looks like the espionage pack is very close to being hit as a stretch goal. How exactly will the espionage affect the gameplay and will players be able to manually partake in the espionage missions or will they mostly direct the action from the planning phase?

Larkon Studio: A player can either chose to infiltrate another player’s kingdom, or send spies to do his work. An act of espionage depends on the player, and will allow a wide variety of actions.

Initially, you will be able to send spies to find out about another kingdom’s leaders and generals, economy and the size of their army. Later quests will let you assassinate key members who are not in your favor, sabotage main buildings or incite revolutions against a king.

You may take these quests by yourself, or send out heroes to do the job. Failure to complete these missions may result in your heroes taken a prisoners, worsened relations and even a declaration of war.

OAG: Do you find that it’s still difficult to get eyes on the project from media due to the stiff competition from other indie and AAA titles or has it been smooth sailing for the team?

Larkon Studio: We’re an indie company, so we’re dedicated to create CivCraft’s concept, but we don’t have the funds to create an AAA title. Our progress so far encourages us since we received positive feedback about our concept and our community grew over the past year. Our Early Access model will allow us to improve CivCraft as we progress.

OAG: Feedback and criticism are huge elements that can affect the outcome of a game. When people provide critical feedback of CivCraft and make suggestions that might seem outside the scope (or budget) of what the team has envisioned for the game, is that sort of feedback taken into consideration? Is it discarded? Or are compromises discussed if it’s something that seems worthwhile in the long run?

Larkon Studio: We take great care to implement as much as we can and engage in discussions about CivCraft’s features with our community. Our Kickstarter Campaign is meant to let our backers vote for features and gameplay elements. So far, we didn’t receive a request of feedback that we couldn’t take into account. We even added some of the more bizarre requests, as part of the exclusive Kickstarter edition of CivCraft.

OAG: A lot of games have been getting docked pretty badly in the review score department or excoriated by the media for not being diverse enough. Do you think this makes developers work harder to be more inclusive or does it take them further away from their original vision for the game? Also, have these issues at all affected the way the team has approach designing and implementing features into CivCraft?

Larkon Studio: It’s indeed crucial to receive positive reviews about your game. Reviews are the heart of a video game and it requires game designer to work harder. CivCraft received positive reviews on many accounts, but when we received comments last year to improve our graphics and frame rate, we changed many models and mechanics and improved our graphics and frame rate. I don’t think this caused us to compromise on other features, instead, it only forced us to work more hours and set a higher bar for ourselves

OAG: And finally, in regards to the console version of the game… there are obviously limitations on how much modded and customized content can fit into the game before memory becomes an issue for the PS4 and Xbox One. In regards to balancing custom built cities, multiplayer and mods, are rules or limits being put into place to ease the technical transition of the game going from PC to home console?

Larkon Studio: Our concern is to save memory and optimize CivCraft for the PC version as well. We’ve implemented several techniques over time to save memory and have a smooth and cost effective game. I’m sure these optimizations will go well for the console versions as well.

Modding will not be limited in the amount of add-ons players can add, nor will there be technical limitations to modders. We believe in free modding and it will be the modder’s responsibility to manage his/her add-on’s memory. Just as with any other game that supports modding, a costly or incompatible mod will be removed by players and the better mods will be more popular.

Massive thanks to Arik Helman and Adrian Tache for taking time out to answer the questions during the hectic time of finishing up their Kickstarter for CivCraft: Legends of Ellaria. If you think the game is of interest to you and you would like to see some of the stretch goals met, you can learn more about the project by visiting the official Kickstarter page.