Known as “Oni” in Ubisoft’s upcoming melee fighter For Honor, the samurai come with precision-oriented weaponry and skills and offer players a graceful and deadly alternative to the knights and vikings in the game.

The trailer was unveiled during this year’s Tokyo Game Show and is only a minute and a half long but it gives a decent look at how the samurai’s moves play out in For Honor. You can see the game in action with the trailer below.

The feedback to the trailer has mostly been entirely positive. A lot of gamers love that this is a true melee game and I’m right there along with them. It’s very cool that we’re getting a game that is centered around technical melee combat.

A lot of games usually have one-button attacks or simplistic fighting mechanics that remove a lot of the skill and thrills out of the encounters… sort of like the one-button kill moves in Assassin’s Creed‘s multiplayer. Hardcore gamers have been pining for a return to tactical melee games like Bushido Blade and more games like Mount & Blade, and it looks like For Honor might be the closest thing we’ll get to that.

Additionally, the developers are working hard to bring different kinds of styles and techniques to the table and balance it around a Dynasty Warriors-esque setup where NPC mobs will help fight alongside the players during battle. I just hope that there’s a decent single-player attached to the game because if the multiplayer doesn’t turn out to be as fulfilling as Ubisoft is hoping for, it’s going to piss off a lot of gamers if there’s nothing to play outside of the multiplayer, and then we’ll all end up with a dud like Evolve. 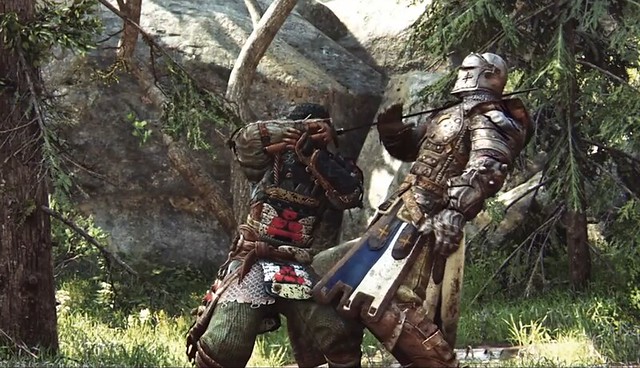 I’m curious if the differences between the three main factions will be more than just aesthetic-deep? For now it’s basically just different animations but I wonder if this also changes how armor, blocking and parrying will be handled as well? I’m sure we’ll find out more as the game moves closer to completion.

You can look for For Honor to launch on the Xbox One, PS and PC in 2016. For more information on the game be sure to pay a visit to the official website.