With Fallout 4 up and out on home consoles and PC, a lot of gamers are now curious about who they can acquire as a companion and who they can engage in romance throughout the game. Well, there are some comprehensive guides available for the companion locations and some romance options in Fallout 4.

Twinfinite has a few very detailed articles covering the companions and romance options in the game. For romance, they detail how you can get Piper as an option by getting her affinity up to the top, which will unlock the “Gift of Gab” perk. Piper, located in Diamond City, can also be acquired as a companion. There’s a video guide on how to acquire Piper and what she brings with her to the table from UnitedGamer101 that you can check out below.

Preston Garvey is also on the list, also known as the last of the Minutemen. He can be romanced and charmed by getting his affinity to the top, unlocking the “United We Stand” perk. He’s located in Concord and can be acquired as a companion as well.

Paladin Danse is located at the Cambridge police station, and when his affinity is maxed he’ll grant you with the “Know Your Enemy” perk, which will grant you 20% extra damage against synths, ghouls and super mutants. Danse, a member of the Brotherhood of Steel, will join your party if you join his faction.

Dogmeat isn’t there to be a romantic interest (Fallout 4 isn’t that kind of game) but he is there to provide you with companionship out there in the post-nuclear wasteland of Boston, Massachusetts. You’ll find him just outside Vault 111, close to Sanctuary Hills, near the start of the game. There’s also a comparison between Dogmeat and Mr. Handy, Codsworth, that YouTuber Brodual put together that’s worth checking out below.

Cait is a character located near the combat zone, and if your affinity with her is maxed out you’ll be granted the “Trigger Rush” perk. Acquiring Cait and utilizing her abilities are further detailed in the video below from YouTuber MrPattyPlays. Check it out.

Up next is John Hancock, a ghoul of sorts in Goodneighbor. Reaching maximum affinity with him will earn you the “Isodoped” perk. This long distant cousin of Davy Jones is located near Scollay Square if you need a more precise location on his whereabouts.

Deacon can also be romanced, and when his affinity is maxed out you’ll earn the “Cloak and Dagger” perk. This will earn you 40% extra stealth length and 20% extra stealth damage. Deacon is located near the Old North Church near the abandoned railroad. 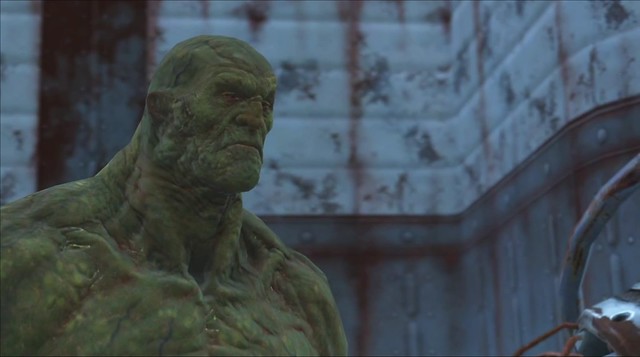 Curie, the Mrs. Handy Robot can be found near Vault 81, and with raised affinity can earn you the “Combat Medic” perk, which unlocks 100HP each day if your health falls below a certain percentage.

Last on the list of romance candidates is Macready. He’s also in Goodneighbor and will grant you with a “Killshot” perk if you max out his affinity. This will give you a 20% extra accuracy when using VATS to perform headshots.

Other companions in the game that can join you but may not necessarily be romantically involved with your wasteland survivor includes Nick Valentine, a private eye from found near Vault 114. You can find out where to locate him and how to acquire him as a companion with the video guide from UnitedGamer101 provided below.

The Mr. Handy Robot, Codsworth, who you’ll meet early in the game back at Sanctuary Hills. Strong is a super mutant located at Trinity Tower… if you free him during the mission he can become your companion. The same can be done with X6-88, the synthetic who is found near the Institute.

Each of the perks, likes and dislikes are discussed in detail in a separate, multi-page article on Twinfinite. Alternatively, there is a complete video walkthrough detailing each of the companion locations, provided by YouTuber Gametastik, which guides gamers to each of the locations of the companions listed above.

Fallout 4 is available right now for the Xbox One, PlayStation 4 and PC. The game has already managed to break records on Steam with the most concurrent players in a game at a time, as noted by Blues.

You can pick up a physical or digital copy of the game right now for the platform of your choice, or you can learn more by visiting the game’s official website.