Avorion is a sci-fi, space combat game where players can build their ship from scratch and make it as big and as powerful as they want. It’s possible to design carrier vessels, space stations and capital ships – flying them around and conquering the galaxy as you see fit.

The sandbox space game was successfully Greenlit for Steam in just nine days. Part of the appeal to the title is that when designing ships it’s possible to utilize optimized blocks that reduce overhead performance compared to some other voxel-based space games; this allows players to build really big, expansive ships that can be dynamically destroyed. I managed to reach out to developer Konstantin to ask a few questions about some of the gameplay features and design mechanics. You can check out the interview below.

One Angry Gamer: With the game supporting OpenGL natively, will this game launch into Early Access with native SteamOS support as well?

Konstantin: Since SteamOS is debian-based and the game is being developed on linux, getting it to run on SteamOS shouldn’t be too hard. I don’t have a SteamOS to test it on right now, but I don’t think this will create major problems. The bigger step is adding gamepad support. Since I’m planning to release into early access ASAP, I don’t think this feature will make it in time for the early access launch. But later on, definitely, probably during the early access period.

OAG: Building a ship to any size seems like an awesome feature and I imagine players will get very creative. I was curious if the game is optimized to handle multiple capital ships and massive space-station sized vessels in the same instance? In Space Engineers it’s possible to build these mammoth moving structures but the game isn’t optimized very well to handle more than one or two of those kind of ships on the screen at once.

Konstantin: Performance drops of this kind usually come with large numbers of blocks. In Avorion, you can scale your blocks, making intersection testing and rendering for large structures a lot easier. Instead of, say, 100 blocks in a row, you can build one large block, doing the same thing. I’ve tested the game with kilometer long ships and stations, tens of thousands of blocks, and it has been successful so far. You will also be able to merge smaller blocks into larger blocks in the building mode. A lot of effort has gone and will go into performance optimization for this feature. I want to set the bar as high as possible.

Konstantin: There will be squadrons of fighters that can be stored in your hangars. Fighters can be bought at equipment docks and can be designed by players later on. You will be able to organize and command those squads from the ship they’re stored in, and they can be told to attack and defend other craft. Commanding your other ships will be possible as well, similar to a real time strategy game. And you will be able to fly each ship of your fleet, including fighters, ships and stations.

OAG: Very briefly we were able to see some of the collision effects in the Greenlight trailer. It’s mentioned on the Greenlight page that dynamic destruction is implemented, but does that include procedural damage to the ships that allow players to blast apart certain chunks of a spacecraft?

Konstantin: Exactly this. I came up with the idea for the game because I was a little bummed that I haven’t found a game yet where ships actually break where you shoot them. So I decided to just make one!

OAG: As far as damage and death are concerned… will ships permanently get destroyed or can they be respawned at some point if they’re heavily damaged during a firefight?

Konstantin: Ships can get permanently destroyed and when that happens you are returned to your start sector. You will be able to buy an insurance for them so you get the resources back that you invested. Plans of ships can be saved and rebuilding a ship won’t take long. They can also be repaired when they were heavily damaged and not yet destroyed.

OAG: There are a lot of different parts in the game for players to modify and upgrade their ship with. Will the quality or grade of the parts affect the maneuverability and speed of the ship or will that be dependent on how many thrusters or propulsion systems players attach to their vessel?

Konstantin: Both actually. All blocks and materials have different densities, for example iron blocks will be a lot heavier than titanium blocks and so a ship built out of the latter will be easier to maneuver. Thrusters and engines will change your speed and maneuverability respectively, based on where they are attached and what mass your ship has. 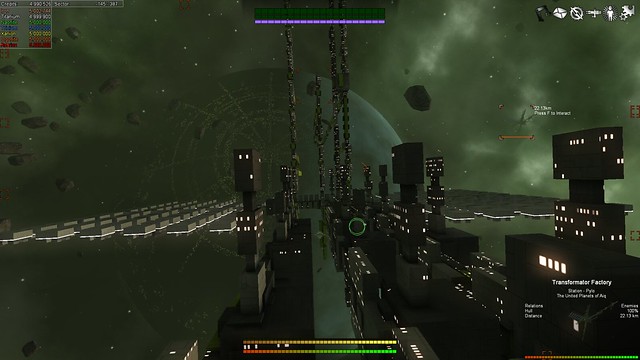 OAG: It’s not mentioned on the general Greenlight page, but I’m curious will flightsticks be supported for the game?

Konstantin: Probably not natively because the game isn’t laid out for that. Once gamepad support is in though, the game will also recognize flightsticks and players can configure the controls for their flightsticks themselves.

OAG: There have been some comments about Avorion being similar to Space Engineers or other similar space sims that have come out recently. For people who might be on the fence about supporting Avorion, what would you say to them to convince them to give your game a try over the current crop of space sims out there?

Konstantin: Avorion’s focus is more on actually flying around in your ships, exploration, trade, management and space warfare. I wanted to make the combat part feel great and epic, and I wanted a game where players can command the battlecruisers. The scale of Avorion’s ships is generally more laid out for capital ships.

The game generates ships and stations procedurally based on different styles for different factions, so you will always find new stations and ships. Those ships are not in the usual voxel style, but made of blocks that can overlap and have arbitrary sizes. In the building mode you can scale your blocks any way you want them to be and they can overlap up to a certain point as well.

I didn’t want to create another Minecraft-like voxel setting in space. There are other great games that are already really good at this. My goal was to make a space action game where you can fly capital ships, fight large battles and where you happen to be able to design your own ships.

OAG: And how soon after the game gets Greenlit can space sim fans look forward to seeing Avorion appear on Steam’s Early Access?

Konstantin: My goal would be in a few months, in February or March. Avorion got greenlit waay faster than I would have imagined and now there is a lot of paperwork that I have to do first. Plus I’m still going to university, studying for my Master’s degree, which also takes time of course.
The good news is: A second developer, a good friend of mine, has joined me, so once we got things sorted out, development should go a lot faster. And the new demo is almost finished, so you can stay tuned for that.

Huge thanks to Konstantin for taking time out of his busy schedule to answer the questions about the upcoming space simulator, Avorion. The game was recently Greenlit for Steam during the process of conducting the e-mail interview. You can learn more about the game by visiting the official IndieDB page.