Digixart Entertainment is prepping to release their new mobile title Lost in Harmony and the lead creative mind behind the project, Yoan Fanise, was willing to answer some questions about the design, the music and influences for the harmonic, story-driven endless runner.

The game is an independent title that former Ubisoft veteran Yoan Fanise began working on after completing the award winning game, Valiant Hearts: The Great War. I was shocked Valiant Hearts wasn’t celebrated more for its awesome soundtrack than what it was, especially since I listened to the soundtrack more than I played the game. However, Fanise and the rest of the crew at Digixart are looking to take those emotional moments from Valiant Hearts and bridge that connection with compelling music and a striking art-style in the game Lost in Harmony. They plan on accomplishing this feat by infusing the game with an eclectic mix of music from recognized composers and artists, who will help bring the story to life.

The game itself sees a young teen named Kaito trying to help his friend Aya deal with a terminal illness; they go on a great adventure exploring various wonders of the world. There’s a really great preview of the game on Indie Game Magazine. Nevertheless, Fanise explains how many songs gamers can expect to encounter throughout the title, some of the modes that will be made available outside the story mode, as well as how Grammy winner Wyclef Jean got involved with the game’s production. Fanise also explains how Akira Kurosawa’s 1990 film, Dreams, played a significant role in inspiring the team to chisel out a direction and theme for the game. You can check out the interview below.

One Angry Gamer: The art in the game really stands out. Some of the concepts, the backgrounds and characters seem to be very visually charged. It’s all very distinctive. What was the inspiration behind the art for Lost in Harmony?

Yoan Fanise: Thank you, yes I wanted to create an intense experience, with a wide range of emotions, musically and visually. I really liked a Japanese movie called Dreams from Kurosawa. It dared to switch from scenes that have a totally different style; I really like the idea of not being stuck in one color or one style. Both the character artists and background artists are really talented, they are called Nicolas Leger and Matthieu Rebuffat. They work for different companies like Ubisoft.

OAG: Based on the Twitter feed and press releases, part of the soundtrack was composed by Roc Chen and Wyclef Jean. It’s mentioned in the press release that various composers contributed to the game. How many composers in total are represented in Lost in Harmony and how many different music tracks are in the game?

Yoan Fanise: There are 34 tracks combined into 12 levels and it could have an extra hidden level somewhere 😉

They were composed by Wyclef Jean, who wrote a full song for the story, he really liked the depth of it, and wanted to write lyrics for it. Borislav Slavov & Victor Stoyanov who created awesome melodies and the funny track for the Bear attack’in the woods. They worked on Crysis previously.

Roc Chen who is a famous Chinese composer who composed for Jackie Cahn movies and many game blockbusters. Mark Griskey who is the Star Wars composer for videogames and amazing artist too. Finally, I did some tracks, more electro, it was going back to my first passion.

OAG: Speaking of Wyclef Jean – and I’m sure you get asked this a lot – but how did Jean and Digixart get together to collaborate on Lost in Harmony?

Yoan: Someone I presented the concept [to] asked me if he could talk about it to Wyclef as he really wanted to compose for other medias. This is how it started, it is amazing to see that video games are now mature enough to stimulate big stars like him.

OAG: With these various artists helping bring the musical sounds of Lost in Harmony to life, what kind of musical genres can gamers expect to hear throughout the gameplay? Will it all have a similar theme or will it fit into a specific genre or will it be wildly disparate musical tracks included in the game?

Yoan: There is a wide variety of genres, but I personally love the quiet moments, the ones with subtle piano melodies, you know like in Valiant Hearts 😉 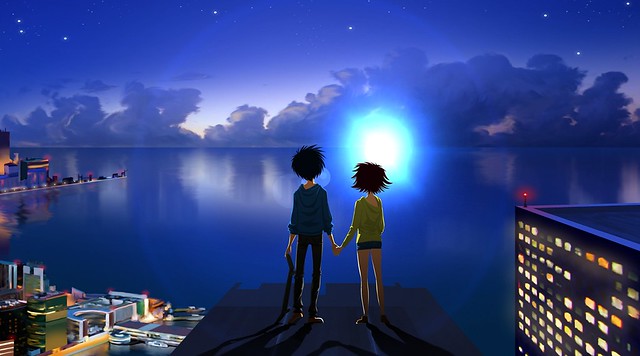 OAG: Will Lost in Harmony have multiple modes? It’s mentioned that it has a story involving Kaito and Aya, but will there be a free-play mode or additional modes outside of the main story?

Yoan: Yes this is the big reveal of the launch, beyond the story you can create your own dreams, on the track of your choice. This can be from your iTunes library or from Soundcloud.

During Beta test we have seen wonderful utilization of it, beyond what we were thinking we can do with the editor. So we wanted to make it available to everybody, so that they can express their talent, and for bands even to promote their creation.

OAG: If Lost in Harmony manages to capture a solid audience on mobile devices, are there any plans to potentially branch it out to home consoles or PC?

Yoan: Yes there is but I can not tell yet exactly when, but yes definitely

OAG: And finally, will there be any post-launch content or will the game launch as a feature-complete title right out of the gate?

Yoan: Yes, we already started to create the second story, I don’t want to reveal the content but gamers will love the composers, their games have been legends…

Massive thanks to Yoan Fanise for answering the questions. Lost in Harmony is due for release this Thursday on January 21st for iOS devices. You can learn more by visiting the official Digixart website.