Blackbird Interactive and Gearbox Software recently unleashed the real-time strategy game Homeworld: Deserts of Kharak onto Steam for the PC gaming community. The RTS title has been receiving a lot of interesting feedback, notably in regards to how good the graphics are, how limited the content is beyond a few maps in skirmish and a 10 hour campaign mode, and how moderately mundane the AI is.

The game works as a prequel to the Homeworld franchise, which usually involves giant space battles and strategic fights amongst the stars. Deserts of Kharak is a ground based game that sees players assuming the role of an excavation crew researching crashed starships in order to study them and eventually journey into space. However, the crash sites are guarded by Gaalsiens and their unrelenting forces.

The campaign focuses on players making a great journey across more than a dozen missions, securing resources and defeating enemies along the way. Players command a ground carrier called the Kapisi that enables them to engineer new equipment and deploy additional units.

Homeworld: Deserts of Kharak features a skirmish mode against the AI, as well as an online PvP mode against other players.

But how well do the features hold up under scrutiny for its $49.99 price-point? Well, it’s interesting because some people are okay with while others feel you’re not getting enough for the asking price.

Majonez took time to write a review about Deserts of Kharak after admitting he usually does not write reviews, stating…

“First, campaign length. I’ve spent about 10 hours playing campaign only. I’ve tried to obtain every resource available on *all* 13 missions and it only took me less than 10 hours to get this done. I felt quite disappointed when I realised this is it.

“Would I spend €46 for this game knowing how short my satisfaction would be? Probably not. Would I recommend it to a die-hard Homeworld fan? Probably yes, but only if you’re really willing to spend this amount of cash for a game so short” 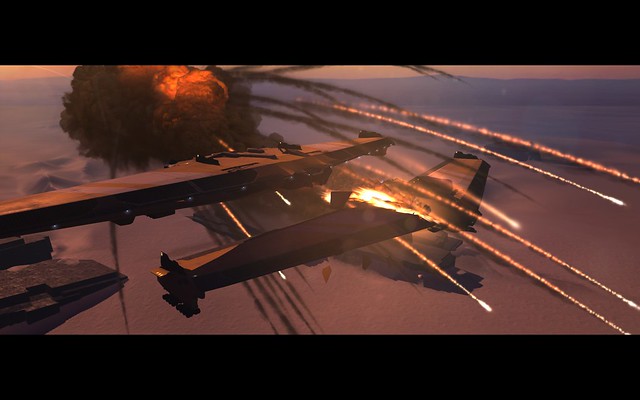 FewFingerDeathPunch had similar complaints but went more in depth about the whole thing, writing…

“Combat has a serious lack of individual unit importance, the only way you can win is mostly by unit spam, you’ll throw a lot of the starting units straight to the winds. There’s no ballistics, at least from what I can tell, rail gun hits seem to be RNG and everything else is just falsely animated when compared to what’s actually shooting and what’s actually taking damage”

“I really want to say I enjoyed this, hell I probably did, the campaign (as un-imaginative as it is) is enough to make you want to complete it, but that’s pretty much all you’re getting. If you’re a die-hard Homeworld fan and you want to experience this epic journey of the great expedition then be prepared to experience the feeling of a very rushed game along with it. Buggy animations, unit clipping, fairly certain I’ve mentioned it all.”

Lenutrie Metanolo also lamented the AI and “emptiness” of the campaign, writing…

“Thumbs down because I have to be objective (and not everyone have to be a fan of the saga).
The gameplay is cheap: the few units available results in few tactics and strategies. Does enemy have anti-air guns? If no smash him with aircrafts, otherwise go with cruisers (and that’s all). Scenarios are so empty. Yes, the game is about the desert, ok, but still feel like something is missing.”

ByroniusMonk felt as if there wasn’t enough time and appreciation put into the campaign when it came to easing the player into something long lasting and satisfying, writing…

“[…] it was a good game, but it felt like half a game. The campaign was too short, there were only a handful of units, and the tech tree felt shallow and rushed. There were a lot of upgrades, but you blew through them so fast there wasn’t time to appreciate their effects.

“Half a recommendation. Get it, but wait for it to go on sale.“

Bill S. Clinton Esq., shared similar thoughts, claiming that the game would be better if it were picked up at a discount, writing…

“Not bad, not great either. It’s very short, not much unit variety and it feels like they cut corners in some places. Would still recommend it over other games that are coming out but it can’t hold a candle to the old Homeworlds and for the asking price it’s lacking in content and refinement. Wait for a sale”

However, not everyone had an easy time of it. Some gamers relished the challenge and found themselves highly engaged with the graphics, audio and campaign mode. Solais disagreed with those saying the game was too easy, writing…

“I do have to say that it seemed like I found the exact opposite what everyone else was talking about regarding the campaign, including TotalBiscuit. They said the campaign is very easy, there are too many resources, you get unit types out of the blue without explanation, etc. I found all this to be false, as I had a rough time on Normal difficulty, I was always out of resources, and every single unit type you get is explained. So that particular criticism is weird for me. But maybe it’s just me.”

Cheshire explained that the game wasn’t necessarily bare-bones, it was just more focused on small skirmishes with intimate battles, writing…

“ the new Homeworld part is not about big skirmishes – it’s tidily made RTS that carefully combines different approaches and features from well-known strategy games of past. Imagine if you would play Ground Control 1 in a very lovely Dune-like desert, where Commander APC does unit production/research work and harvesters collect minerals. It’s a tactical RTS with some unit heritage from original Homeworlds and gameplay about small armies and squads – and this will be a full description of DoK.”

[SFSS]Synystr was enthralled by the cinematics, completely taken aback by the art-style and design and was unable to figure out if it was live-action with a filter or hand drawn (it was actually live-action photographs with an oil-painting overlay that were animated similar to Flash games)…

“The cutscenes boggle my mind. They look like live action, but heavily stylized to look hand drawn. But I’m not sure. Either way they are fantastic. They tried a couple times to get a “tatooine sunset” shots though… which was awkward with only one sun. But the effort was noted.”

Cswiger also complimented the graphics and combat, laying the praise on thick for the unit types and how effective they are during combat…

“Combat is fun and reminds me a lot of Ground Control, which is a pretty good thing. I think I’d like a bit more variety of units, but I’m only a third of the way in. Micro matters a little– not so much in big battles, since unit AI chooses reasonable targets by itself– but if you have a railgun plinking away at you from max range, having your LAVs use their speed boost ability can end the threat more quickly.”

Stone Cold Jane Austin enjoyed the game but felt the campaign was a bit on the short side – she did feel as if they made up for it with great unit designs and animations, writing…

“While the campaign is short (I finished in approximately 14 hours, in no particular hurry), the plot is enjoyable and did manage to spring a surprise on me, and the missions throw you the occasional curveball, such as commanding a team operating independently of the main body, with no production facilities. Overall the gameplay is fun and engaging, although I cannot comment on multiplayer as I’m terrible at RTS and just stomp computers while watching pretty explosions.

“My only real complaint is that the main camera doesn’t let me zoom out as far as I’d like, so I spent much of the game in sensor view rather than enjoying the desert landscapes, but the developers appear to be taking an active interest in feedback and player suggestions, so there’s a good chance this may be fixed.”

Schism Navigator feels the game has potential but there are some nagging bugs that need to be addressed and a few more multiplayer maps to extend the replay values, but overall they’re all-in on Homeworld: Deserts of Kharak, writing…

“Well worth full price if you are a homeworld fan. If not you might want to wait a little on buying at full price until the devs have fixed some of the quibbling issues and have released more maps.

“2016 is turning out to be a great year for RTS compared to 2015’s duds in Grey Goo and Act of Aggression. Deserts of Kharak is a fun labour of love with great developers and a bright future for both it and Homeworld in general.”

The general feedback is that if you’re a die-hard fan of Homeworld then you will likely enjoy Deserts of Kharak. Alternatively, the limited campaign and somewhat shallow AI will leave fans wanting for more.

Many agree the game isn’t worth $49.99 but if it gets cheaper it’s something RTS fans may want to consider adding to their library.

You can pick up a digital copy of Homeworld: Deserts of Kharak from the Steam store. For more information on the game feel free to visit the official website.