It’s only been out for a couple of days and the modding scene has already taken a hold of SCS Software’s American Truck Simulator and turned it into a modding tour de force. They’ve unleashed skins for the limited roster of trucks that come with the game, and they’ve expanded said roster with a number of new trucks, including the Peterbilt 389, the Freightliner Coronado, and the Scania.

American Truck Simulator just recently came out and already Modsats.com has a fully robust catalog of mods made available for the game, from model add-ons, to custom liveries, to tuner parts, to radio sounds, to AI enhancements… heck, there’s even a mod to remove the police from the game called the No Police For ATS mod.

The reason the mod removes the police is that there have been a lot of complaints about the police being way too overly aggressive in the game… not quite as bad as GTA V, but it’s bad.

But of course, you probably came to deck your American truck out with a nice ‘ole Deadpool livery, just in time for the launch of the new movie, right? Well, you can download it right now for the Perbilt 579 truck, courtesy of Modsats user Barboot X. You can download the skin right now and install it using the American Truck Simulator mod manager.

Now if you feel as if there are enough skins but not enough trucks, there’s a new Peterbilt 389 that’s been added to the game from a variety of modders. The mod works with version 0.9.1.3 of American Truck Simulator. You can catch a glimpse of what it looks like in the game with the image below. You can also download the mod right now from over on Modsats.com. 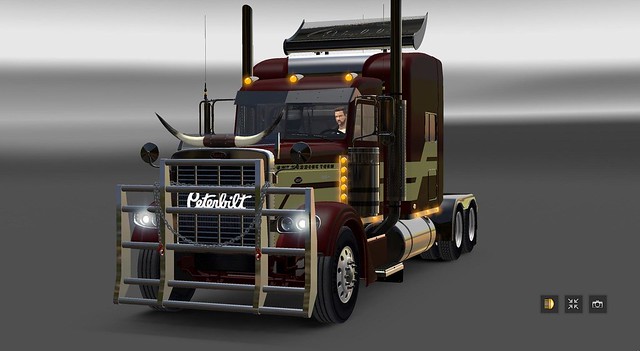 Now if American trucks aren’t your thing (even though the whole point of American Truck Simulator was to include American trucks and roads) you might enjoy Scania range of trucks and accessories that have been made available as an extensive mod for SCS Software’s latest trucking simulator.

Modders Patrick Thamm and Nordic Skyline implemented the standalone truck into the game and you can purchase it from the Kenworth shop. It features all the different Scania cabin types along with all of the customizable accessories that come along with it.

You can get a glimpse of what the mod looks like in action with the video demonstration below.

Very impressive stuff. The Scania line is from the 2009 model. You can download the Scania v2 mod with all of the accessories and mods from over on the Modsats.com website.

If you still need more trucks to flesh out the variety offered in the game to something more substantial, there’s a Freightliner Coronado. This thing looks gorgeous.

Modders Dmitry68, Stas556 and Nekit73rus (Germans and Russians working together again… who would have thunk it?) have collaborated in making the Freightliner Coronado available as a download with multiple skins, wheels, two different interiors, a built-in GPS, smoke, and a fully functional cabin. You can purchase the Coronado from the in-game Kenworth dealer. You can see what the mod looks like in action below or download it from over on Modsats.com.