Recently a trailer for Stellar Tactics went live and it detailed a game that allows players to fly a spaceship around a large galaxy consisting of 200,000 solar systems with various planets in each system, as well as recruit a rag-tag team of powerful mercenaries from across a galactic playpen.

The really intriguing part about Stellar Tactics isn’t the space travel, decking out your ship with upgrades, or the ability to destroy enemy vessels in combat, but it’s that it adds into the mix some unique tactical turn-based action found in games like Wasteland 2. This means players can board ships, explore foreign planets and interact with alien species both friendly and hostile alike. It’s like Mass Effect 1 meets FTL meets Fallout 2.

The concept of Stellar Tactics blew me away and I had to find out more. Thankfully, developer Don Wilkins – an established name in the gaming industry who has been designing games for decades and has worked on iconic franchises like Wizardy and Arcanum – was kind enough to answer a few questions about Stellar Tactics. He explains a lot of the underlying design mechanics, how they work, and what sort of plans he has in store for the game after spending six years working on it. You can check out the Q&A below.

One Angry Gamer: So where did Stellar Tactics come from? How did you come to the conclusion that a turn-based RPG and an interstellar exploration game needed to be combined together?

Don Wilkins: The idea was a very long time in the making. Initially, many years ago (1980) I wrote a text based space exploration game on an old type terminal connected to a university mainframe. At the time I wrote it for fun, being a big sci-fi and fantasy fan. Over the years I expanded on the idea as I played some of my favorite games, including Wizardry, Fallout 1-2, Arcanum and of course Baldur’s Gate 1 and 2. I’m a huge proponent of games that make you think, have a strong narrative and of sandbox games. Though I’ve had a great time with many of the sci-fi game offerings available, I’ve felt there was something lacking. I always wanted to play a classic RPG that let me build a team of sci-fi mercenaries, board a ship of my choosing and engage in an extended RPG space adventure. I started all of this as a hobby. Instead of model trains, cars or carpentry, I chose to see how far I could go making the game I’ve always wanted to play.

OAG: Is the game running on existing engine technology or is it built on its own proprietary tech?

Don Wilkins: The game is running on a combination of both.

OAG: How will the planetary exploration be setup? Will every planet in the solar system allow players to land on it or will only certain planets allow for landing?

Don Wilkins: Not every planet can be landed on. The procedural nature of the game is limited to the random generation of the universe, locations of static narrative based story missions and the random mission generator. Every game is different. There is, however, no underlying voxel or procedural mesh generation system.

There are many, many locations to explore. Depending on the 8 digit random seed you enter at the start of the game, the engine will generate around 200,000 systems each with a maximum of 10-12 planets (and other stellar phenomena) in each. Each of those planets have different properties, some suitable for habitation, mining, terra-forming and others are just hostile and toxic, though they may have some mineral value. Many planets have orbiting stations, some trade stations, research facilities, hidden raider bases or faction specific locations. Each of these locations is a likely target for the dynamic mission system and the main story that procedurally chooses it’s locations based on the available universe data.

OAG: Exactly how big will the planet exploration be? The trailer teased some bases and outposts, but will players be able to scour a large-scale, procedurally generated surface or will it be confined to certain segments?

Don Wilkins: Planet exploration is a good part of the game. You will be confined to areas related to scanned points of interest, mission locations or stations. There are several ways you will encounter planetary locations. You will either be sent to a planet on a mission and a destination will be added to your log. Upon arrival you can land at that location and engage in the story or mission you’ve activated.

The other way to find planetary locations is through exploration and scanning. Scanning planets allows you to find planetary stations, hidden bases, ancient ruins, cave systems and other location types as well as resource nodes. Resource nodes allow you to mine resources on planets using remote mining drones and platforms that can be purchased or crafted. There are a variety of different resource nodes, Mineral, Gas and Rare Earth minerals. Other resource types are very rare and are part of the story related to an ancient alien race. Harvesting these rare resources allow you to power up devices that provide your team with special team based combat effects. Scanned planetary data can be sold for profit.

OAG: The trailer showcased a couple of different ships. Will players be able to craft their own ships, do they buy new ones or do they earn them from missions? And will the size of the ship determine how many crew members that can be on board?

Don Wilkins: Great question. There are a total of 40 ships. In addition to that there are several other ships related to the story that can be acquired. Each of these ships can be flown and each of them have different capabilities and purposes. You will not be able to craft ships in the initial release of the game, but I’m considering adding that as a feature at a later time along with building a home station for your team. You can buy ships, earn them from missions or take them from your enemies by disabling a ship, boarding it and capturing it (yes, you can be a pirate/raider/bounty hunter). Captured ships can be sold for profit or kept. You can own multiple ships and they can be stored at stations for a price.

All ships fit your crew of 4 team members. Each team member can have specific roles on your ship that provide bonuses and base skills that affect that way your ships perform. Those skills improve with practice. So, if you your crew member is placed in the pilot role, they will gain experience as a pilot and unlock perks that affect the ships performance. There are 4 crew slots in each ship and each has a unique set of skill perks that can be unlocked through the perk system. 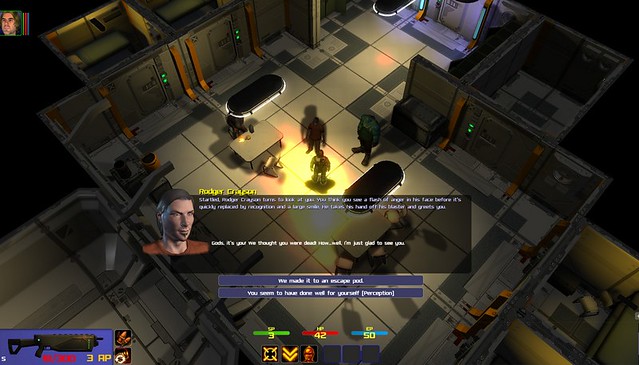 OAG: Speaking of the crew, will perma-death be a thing where you can lose a crew mate and have to go searching for a new one? Or will there be a specific selection of crew members?

Storyline characters stay with you on your ship unless they leave the party for a reason related to the story. Hired team members can be left at any bar or cantina and picked up at a later time. Some story characters have a permanent role on your ship and travel between ships with you. You really should focus on building a strong team, however, because story and content is gated by your ability to defeat your opponents and completing parts of the main narrative. Fly into an area of the universe populated by high level enemies and you will be defeated, quickly.

OAG: It was mentioned that players can explore the vast galaxy all they want, but I’m curious will there be an actual end-game win conditions or is it one of those games that just keeps going on for as long as players want?

Don Wilkins: There is an actual end to the main story. However, I want to point out that Stellar Tactics is a bit different from other games. The design of the game is such that I can add content drops at any time and that content will be propagated into the universe in the form of storyline episodes, new missions, log entries, bosses, events and expansions. My entire goal with the game is to create a canvas that can be filled in with content for many years. I’ll be inviting the community to engage in that process. More to come about this at a later time though.

Regarding going on forever. At this time, there is no level cap. In fact, if you max a skill, that skill can be reset, resetting all perks, and you start gaining those skills again, similar to what was done with Skyrim with their Legendary skills. Content scales to your characters level, though some content is tiered, where enemies become more complex and difficult the further you travel from the center of the universe. I do want to say that if I find during balancing that the system I’m mentioning here creates balance issues, exploits or makes the game less fun, I’ll add a level cap. At this time though, the plan is for infinite progression. 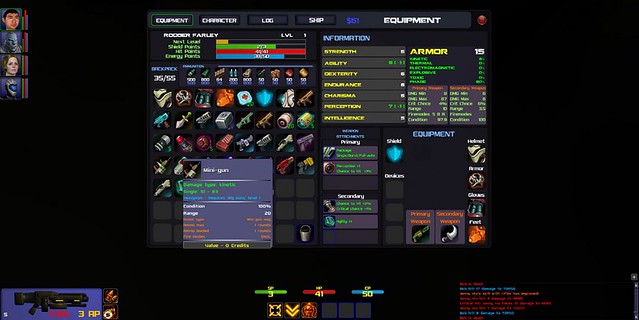 OAG: Also, how persistent is the universe? Will things be able to happen autonomously without direct player control or will the universe be governed strictly by the decisions of the player?

Don Wilkins: There are both autonomous events and events directly controlled by a player. An example of an autonomous event might be that convoy of trade vessels is destroyed by raiders. In a case like that, prices for the commodity will go up and if you are a smart trader, and read the news, you might be able to capitalize on the event. Other events that are autonomous might be the way factions interact – say one faction is caught encroaching on another factions resources, eventually a skirmish may start. Depending on your faction alignment you may be asked to participate. The player will be able to control certain events through storyline decisions. Though, these decisions may not be obvious at first from the dialog options, those options should give you at least a clue as to what outcome those decisions might cause.

OAG: And finally, is there a release window on when gamers can expect to get their hands on Stellar Tactics?

Don Wilkins: I can only say “When it’s ready”

Huge thanks to Wilkins for answering the questions. You can learn more about Stellar Tactics by paying a visit to the game’s official website.