For some reason a lot of websites seem to think that the FTC reinvigorating their policies and guidelines and updating them to deal specifically with YouTubers, video game reviewers and new-wave media outlets, doesn’t apply to them. One of those websites with that frame of mind is the Ziff Davis-owned PCMag.

Back on March 22nd, 2016 Twitter user Nick Soapdish pointed out that PCMag.com has lots of affiliate links in their articles with no disclosure whatsoever.

So many affiliate links and looks so ridiculous (no disclosure of course)https://t.co/Q2oL4zMn2y
cc @WilliamUsherGB pic.twitter.com/bpvGdVYroG

I decided to click through to find out if the affiliate links really were attached to PCMag and if they really were undisclosed.

In the Wii U review of Pokken Tournament that was published on March 15th, 2016, there’s no mention at all that the outbound links toward retailers are affiliate links. These links provide PCMag with a commission of the sales from whatever anyone buys after clicking through the link.

If you hover over the links themselves the actual affiliate tags do not appear. It just looks like a standard outbound link.

However, if you click through the links you will see that the affiliate tag does appear in the URL bar at the top, as well as in the page code on the product listing.

Essentially it’s masking the affiliate tag on the PCMag site, which is fairly deceptive, but once you click through the link you can spot out the tag. For reference, the Amazon affiliate tag for PCMag is: PCM_Contextual-20.

You can test it on just about any of their web pages with an outbound affiliate link, including one about the PlayStation VR from March 16th, 2016, which has a mention of the Gear VR and an outbound Amazon affiliate link.

There are also undisclosed affiliate links to Dell and Verizon, too.

I decided to reach out to PCMag about this issue to see if they had any plans to update their articles or at least begin to include disclosures of affiliate links within their pieces that use them. I was directed to Ziff Davis’ representative Sal Cangeloso, who responded rather quickly later in the day on March 22nd, explaining that all of Ziff Davis-owned websites abide by a disclosure tucked away on the official Ziff Davis website’s Terms of Service page.

I was specifically pointed to section 5 of the TOS, which acknowledges the FTC regulation, stating…

“ZIFF DAVIS MAY RECEIVE A COMMISSION, FEE AND/OR OTHER COMPENSATION ON SOME CLICKS OR PURCHASES MADE ON, THROUGH OR LINKED FROM THE SERVICE. THIS MEANS ZIFF DAVIS MAY RECEIVE SOME FORM OF COMPENSATION THROUGH AN ARRANGEMENT IT HAS WITH A THIRD PARTY IF YOU (i) CLICK ON CERTAIN ADS OR LINKS ON OUR WEBSITES, EMAILS OR NEWSLETTERS, OR (ii) PURCHASE A PRODUCT OR SERVICE AFTER CLICKING A LINK.”

According to the updated guidelines of the FTC regulation regarding endorsements and disclosures, they explicitly state in the affiliate link section of the guide….

“As for where to place a disclosure, the guiding principle is that it has to be clear and conspicuous. The closer it is to your recommendation, the better. Putting disclosures in obscure places – for example, buried on an ABOUT US or GENERAL INFO page, behind a poorly labeled hyperlink or in a “terms of service” agreement – isn’t good enough.”

In this case, the PCMag disclosures aren’t even located on the site itself, but on Ziffdavis.com. Unless people go looking for the disclosures they won’t find them on the actual content that contains the affiliate links.

I notified Sal Cangelso about the FTC’s update regarding disclosures and whether or not Ziff Davis would take any measures to begin adding said disclosures to their articles on PCMag. Cangelso declined to comment any further and forwarded me to Ziff Davis’ legal department, where I inquired about the company potentially updating their disclosure policies regarding affiliate links.

I received an automated message on March 25th that they received the message and would respond accordingly. Since it was close to the weekend I figured maybe they didn’t receive the message, so I waited until March 29th and tried again. Still no response.

Now if you think that they may have silently started adding disclosures following the notice about the FTC guideline updates, think again. As recent as April 1st, 2016 a news story about a Samsung app was published containing an affiliate link to the Verizon store. 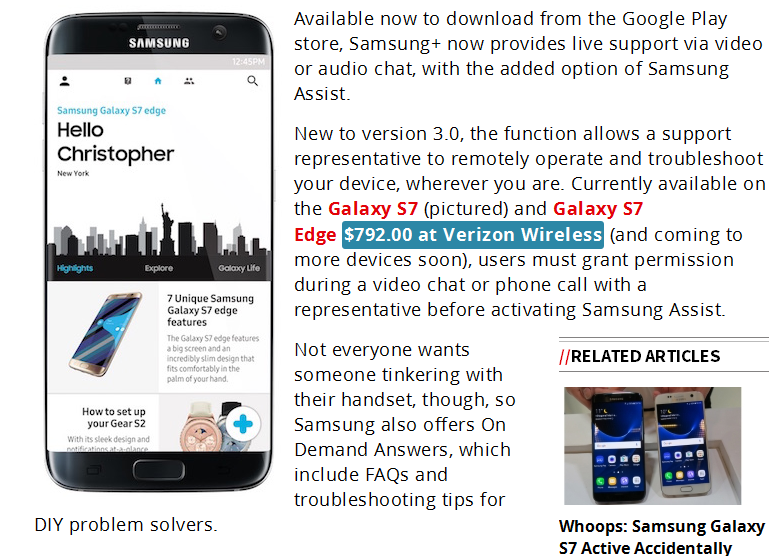 This has been going on for quite some time. Articles dating back as far as 2014 featuring affiliate links from Dell and Amazon – as evidenced in a review of a Dell Inspiron 17 5000 from November 13th, 2014 – showcases that this has been a common practice by PCMag for years.

There are literally countless articles with undisclosed affiliate links being used at PCMag and they don’t seem in too much of a hurry to correct this clear FTC violation.

Just recently VG 24/7 was caught doing the same thing. They declined to respond to any inquiries about their affiliate link policies, but after the FTC was contacted and requested to investigate, VG 24/7 quickly added disclosures to the appropriate articles.

In this case, PCMag doesn’t appear to want to discuss or change their policies based on their current actions. However, if you feel as if it’s misleading to readers or as if they should abide by the federal regulation, you can contact the FTC about the issue by filling out the consumer complaint form on the FTC website.