According to PlayStation Lifestyle the Early Enlister Deluxe Edition will cost $79.99 and grants early access to Battlefield 1 ahead of its October 21st release. Gamers will be able to dive into the action starting October 18th.

The limited Collector’s Edition takes things a step further, with This Gen Gaming rolling out the contents of the $220 edition of Battlefield 1, which comes in a specially designed box, includes a patch with a soldier on a horse, a messenger pigeon tube with a DLC pack, a promotional cloth poster, a steel book and a deck of playing cards. The real meat of the $220 Collector’s Edition is the 14” statue. 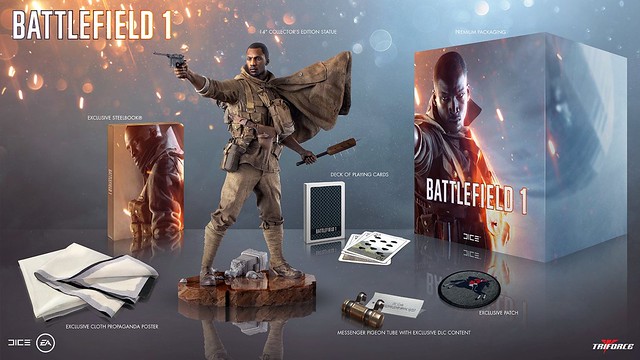 The Collector’s Edition also contains everything already included in the Deluxe Edition, this means that you’ll gain access to the various packs packs. The PlayStation LifeStyle article actually details what you get in each pack:

EA and DICE are really taking the promotion of Battlefield 1 serious. They gained a lot of positive momentum based on a lot of the negative community feedback directed at Call of Duty: Infinite Warfare. So as long as they don’t do anything stupid with microtransactions or some other anti-consumer practice, it’s possible they could have a huge hit on their hands come October 21st.

You can learn more about Battlefield 1 by checking out the official website.