A lot of the promo material for Final Fantasy XV has revolved around the game’s city and the open plains, but this time we finally get to see a lot more of the world that players will be able to explore in Square Enix’s highly anticipated JRPG.

There’s a three minute video that doesn’t feature any of the boy band members, but instead just focuses on the environments, the day and night time shifting, as well as the civilians that populate the areas. You can check it out below after it was posted up on the Final Fantasy XV YouTube channel.

The remixed prelude made famous by Nobuo Uematsu with a vocal hymn fits nicely with the environmental pans. Some of those shots are just drop dead gorgeous. The more realized environments almost look par the course with the Fox Engine. The only giveaway that it’s not real and in 3D is because obviously the footage was captured on a system only running at 1080p. A 4K resolution and you might not have been able to tell that some of those shots were rendered. 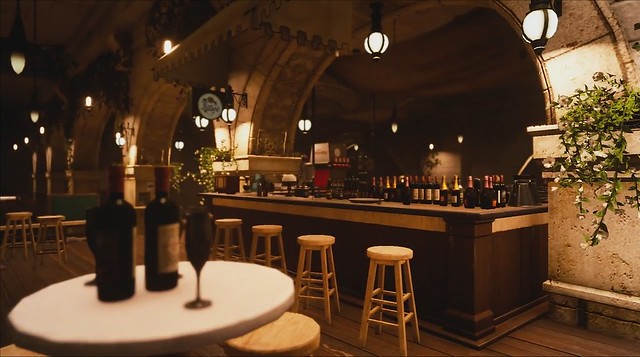 That wine bar looks absolutely exquisite. The detail on the lighting, the planted decorations, the physically based lighting tell a great story. With the archways blocking off certain parts of the light while the base is highlighted from the overhanging lamps. It gives the entire area a sort of ancient look brought up into modern times.

Once again, the texture work is phenomenal along with the geometry. The only downside is the resolution. Had they kicked it up a notch it would have looked like realism achieved.

Some of the other shots were a lot less convincing. The natural outdoor segments betrayed the engine’s lighting prowess, giving away to some slightly uneven light casts and a little too much specular highlighting across the water in the screenshot below. The water issue is coupled with too much alpha density preventing any sort of translucency from rendering near the surface levels of the water. Sub-surface water effects easily could have taken the shot to the next level, but it’s not present. In other words, it looks like it’s in 3D. 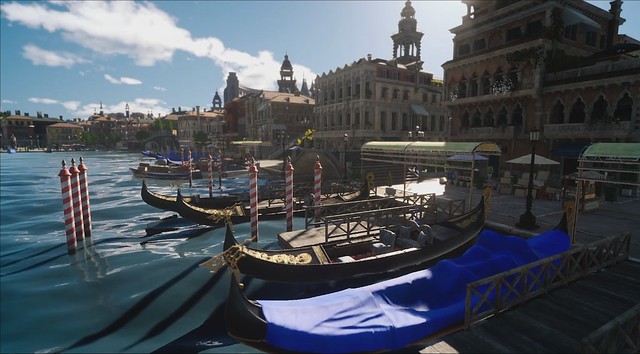 Even with the shortcomings, the Luminous Engine looks good in action. The environments alone are well worth the praise and Square’s team is doing a fantastic job as far as the technical aspects are concerned.

You can look for Final Fantasy XV to go live on September 30th for the Xbox One and PS4. Expect to see more of the game at this year’s E3 in June.