Neon Chrome Set To Arrive On PS4 May 31st

10Tons Ltd announced that their top-down, cyberpunk shooter that recently released on PC, will be making its way to the PlayStation 4 starting May 31st at the end of the month. Neon Chrome is a roguelite set within a futuristic world where players will have to work together to stop the Overseer living at the top of a tower.

The game sees players acquiring weapons, blasting through the environment to take down any and everything that stands in the way, as well as unlocking new abilities in order to survive the Overseer’s forces and get through the neon-lit levels.

If you never saw the PC version in action and you want to check out the PS4 version, you can scope out the trailer below, which was recently posted up over on the PlayStation Blog.

In addition to exploring a futuristic world where you enter into a building where everything wants to kill you, there are also enhancements that can be used to completely alter how your characters can interact with the enemies and utilize their weapons. For instance, there is a cybernetic buff that allows you to split your bullets and deal additional damage to a target; there’s the ability to walk through walls, or gain additional explosive effects.

The game encourages players to experiment after each death. Points and abilities can only be achieved after racking up enough progress and cashing in on those credits to upgrade the character and give them an extra edge when taking on the enemies in the tower. 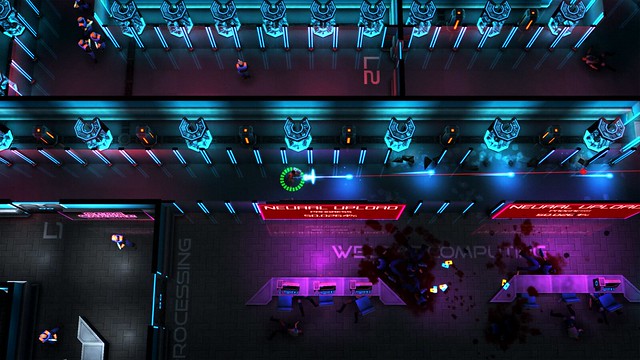 In addition to the standard shoot-fest that players will encounter in this roguelite, there’s also bosses scattered throughout the adventure, with each boss at the end of a chapter opening up a new shortcut that will make the route to the Overseer that much easier.

There’s also local co-op play for up to four-players, which is a rarity in most bigger budget games and was copped out of the recent Platinum Games release of Teenage Mutant Ninja Turtles: Mutants in Manhattan. So at least you can enjoy some local co-op in Neon Chrome on the PS4.

The game is currently available on PC and will be available on the PS4 starting May 31st. For more info feel free to visit the official website.