Like clockwork, SNK dropped another trailer for one of the many teams featured in the upcoming King of Fighters XIV release on the PS4. The latest trailer covers the team for one of SNK’s longest running franchises, Fatal Fury.

The trailer is just under two minutes, set to the background of a truckstop that likely travels down a road through an idyllic town that represents the great idealism of Americana, gamers get a good glimpse of Terry, Andy and Joe in action.

You can check out the trailer below, spotted by PlayStation Lifestyle.

They start with Terry, showing off his “power” moves, as he unleashes his brawling style techniques on his fellow teammates. His moves haven’t changed much but SNK did put some more time into the cinematic appeal of the moves, it’s the same for Joe and Andy. Andy’s elbow strike looks especially spectacular in this newest iteration of King of Fighters, making it look far more devastating than how it appeared in previous incarnations. The repeat effect with the dynamic zoom-in is what really helps sells it.

This trailer comes on the heels of SNK’s previous two trailers, which highlighted Team Yagami and Team Japan. Iori’s team still has me a little baffled since he seems to have two undead partners by his side, where-as Team Japan is just business as usual. 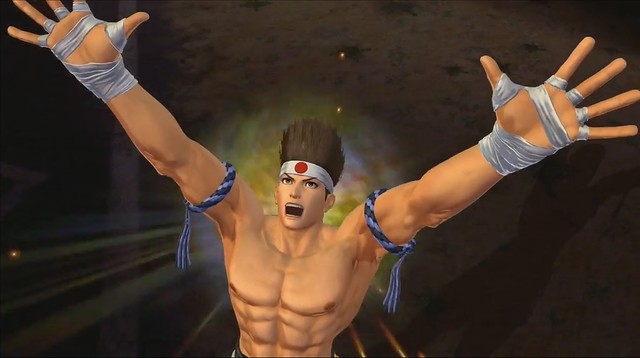 The trailers will continue to pop out as SNK takes King of Fighters to CES 2016 in Orlando, Florida, along with stopping by Combo Breaker 2016. They haven’t said much about their plans for EVO this year, but it would have been a huge boon for them if the game had made an appearance in some official, tournament capacity. Don’t be surprised to see trailers and ads running throughout the live-stream to remind gamers that it’s coming later in the year for the PS4.

You can look for King of Fighters XIV to launch on August 23rd. Pre-orders are also currently available for the game.