YouTuber QuickyBaby has a 14 minute video to showcase how the units work and which roles they’re best used for on the battlefield. Check it out below.

Things start off with the Dwarven hero, Ungrim Ironfist. He’s a very powerful hero unit that can be used to take out hordes of infantry and unarmored foes, wiping out groups of troops with his axe. He’s a melee specialist and a slayer, so he can be used strategically against some harder foes if their life is already low.

High King Thorgrim Grudgebearer is another hero character that specializes in melee combat. He’s noted for being able to charge right into battle and take out unarmored opponents with ease, making him perfect for dwindling down small groups of infantry forces. It’s also noted that he’s not quite as useful when taking on heavily armored foes or high-level units like the dragons or giants.

The Runesmith is a very special class, similar to a wizard but doesn’t have to rely on the winds of magic to dispense buffs or attacks for allies or foes. The Runesmith utilizes black magic and has a special armored buff. He can dispense magic attacks against enemies and is invaluable during combat. 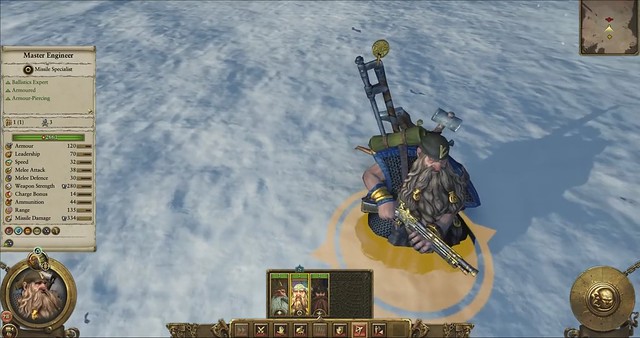 The Dwarf Infantry carry pickaxe hammers into battle. Like many of the heroes of the Dwarven army, even the infantrymen are heavily armored, granting players a notable bonus in battle when taking on foes who can dish out heavy amounts of damage. The only drawback to the Dwarf Infantry is that they’re rather slow, and as indicated in the guide for the Greenskin Orcs and Goblins, long range artillery can wipe out the sturdy but slow Dwarf Infantry before they can even reach their target. Despite being slow, if they do reach their target in one piece, they deal good amounts of damage thanks to their armor-piercing weapons and high leadership stats.

The Dwarf Miners are similar to the Warriors, and they still count as infantry, but they gain some additional bonuses, such as being good against gates, and they get vanguard bonuses in their placement on the battlefield. The video, however, notes that their low melee stats and slow speed makes the unit best utilized as scouts or reinforcements as opposed to infantry frontmen. 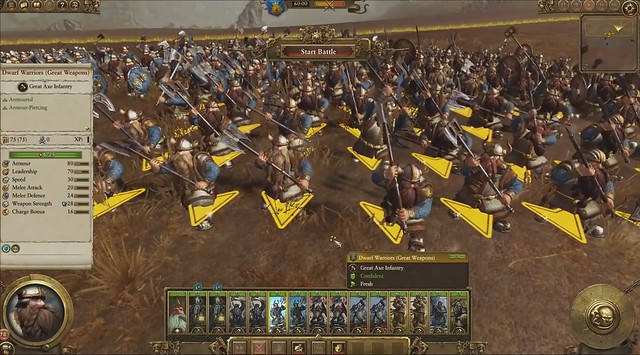 The Dwarf Warriors are an axe infantry. They’re still slow and don’t get much in the way of charging bonuses, but they are extremely well armored and have armored shields and a special charging defense bonus against larger foes, which makes them great for blocking off Orc chariots or slowing down a Steam Tank. They also get a special upgrade to utilize Great Weapons, which gives Dwarf Warriors large great axes to carry into battle, raising their attack power with an added armor-piercing bonus. They do lose some melee defense since they have great axes instead of shields in their off-hand

The Dwarf Longbeards is another axe infantry unit. In the video they’re noted only for being an upgraded version of the standard Dwarf Warriors. They additional armor and health, as well as a slight leadership bonus on the standard Dwarf Warriors. They have higher melee attack and defense but, it also comes at the cost of their movement speed. One of the benefits of the Longbeards is that they’re old and wise (for Dwarfs) and thus the unit makes up in morale for the rest of your army what might be lacking from an absent general. In other words, keep them around other units to keep the morale high.

The Dwarf Longbeards can also come in a unit form with Great Weapons. They are still extremely slow and they lose some defensive properties, but they gain additional melee attack and armor-piercing bonuses. 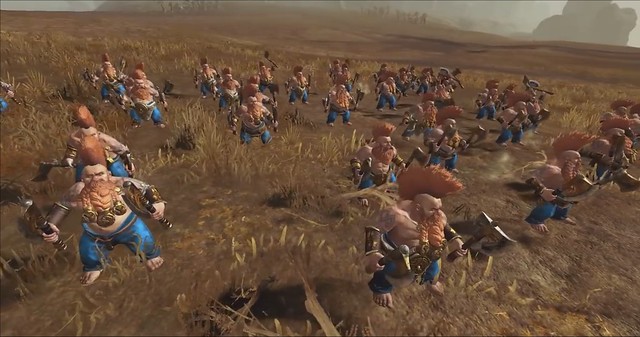 The Slayers are probably one of the most talked about units in the Dwarf faction within Total War: Warhammer. The reason for that is because despite sacrificing armor for armor-piercing capabilities and having hair like Sheamus from WWE, they are actually quite formidable given their melee strength and the fact that they have high leadership, so they do not fret or run away in terror from even the most frightening of beasts. They fight until the death and they fight more vigorously as their life gets lower. Slayers are not good against infantry due to their lack of armor, and even weak infantry can take out a group of Slayers since they have such low defenses. It’s best to use Slayers against Giants, Trolls and other monstrous creatures.

The Hammerers are a hammer infantry unit, they’re heavily armored with armor-piercing capabilities and receive an extra bonus for being damage dealers. They have high leader ship, low speed, high melee attack and rather low defenses due to using two-handed axes instead of wielding a shield.

The Ironbreakers are an axe infantry unit. They have the highest of armor rankings amongst the Dwarf units and are perfect for playing defensively. They’re extremely slow but they have high melee defense coupled with moderate melee damage. One of their major drawbacks is that they’re completely defenseless against aerial attacks, so keep them as far as possible away from bats, wyverns and dragons. They do have a short-range projectile attack that they can use before getting into combat, which is perfect for disrupting cavalry charges or fast moving units – the Ironbreakers can use their short-range projectiles to quickly disperse an enemy unit before going in to finish off the job. Additionally, a few Ironbreakers can take on hordes of infantry so long as the opposing side isn’t using armor-piercing weapons.

Another thing about the Ironbreakers is that they’re so defensively resilient that they can be used as a wall to protect long range units or artillery. 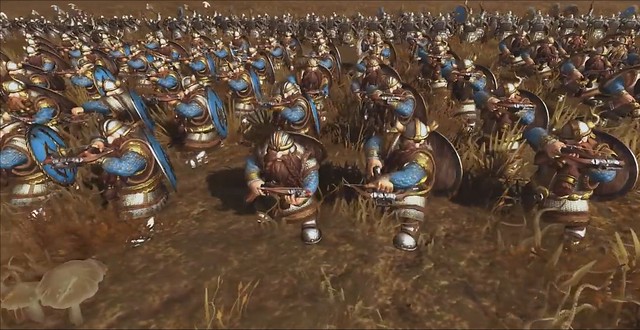 The Dwarven Quarrellers are a crossbow unit; they are very effective against enemies that have practically no armor at all. They’re also not very good in close range melee combat, despite having shields. They’re one of the few long-range units that are proficiently capable of handling themselves in melee combat and the arc on their crossbow fire allows them to bypass doing any direct damage to your own units during combat.

The Dwarf Thunderers unit is a long-range rifle unit. They are classified as a missile infantry unit and they are both armored and shielded. They have armor-piercing missiles and they can hold their own in melee combat. They have high leadership skills so they won’t fret when confronted with dangerous foes but their range is said to be shorter than the Quarrellers.

There’s also the Irondrakes. These are a flamethrower infantry unit. They are anti-infantry and are also armored, but also weak against armored units. They have high leader, but they’re extremely slow. They also don’t do much on the melee damage front, but their projectiles are absolutely devastating, so long as the enemy units aren’t armored up. The flamethrowers are perfect against any unit they is mostly unarmored, so the Irondrakes are a strategic unit that work more as a counter-unit to fast moving enemies that aren’t heavily armored. They also don’t have very long range on their flamethrower. 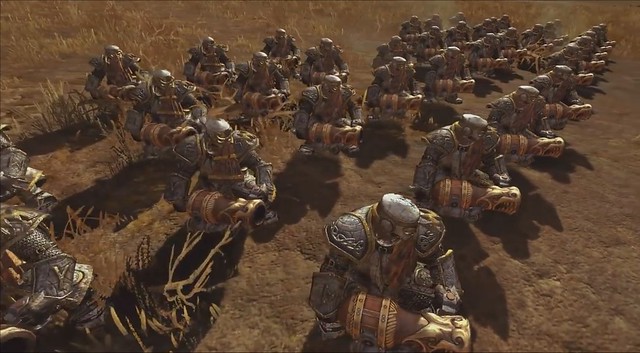 There’s also a sub-class of the Irondrakes that come with a Trollhammer Torpedo. These infantrymen are specifically designed to take down giant units such as the Giants or the Trolls or the Arachnarok. They are specifically classified with an “anti-large” bonus that fires armor-piercing rounds. They’re also a heavily armored unit so they can take a pounding before biting the dust and buying the farm.

As for artillery units… the Dwarves have what’s called a Grudgethrower, which is a long-range, anti-infantry device. It can completely decimate groups of infantry from extremely long ranges. The Grudgethrower is labeled as a siege artillery unit and is also good for thinning out crowds as they make their way down the battlefield.

The Cannon is a generic name for a devastating weapon that is designed to take on anti-large units such as Giants, wyverns, dragons and Trolls. They have very low armor, however, so within a few hits they can be destroyed. Keeping a group of Irondrakes around the Cannon is a good way to prevent them from biting the dust, assuming your foe attempts to rout a group of enemy units to take out the Dwarfs’ long-range artillery.

The Organ Gun has shorter range than the Grudgethrower or the standard Cannon, but it’s a field gun that rapidly fires a barrage of armor-piercing missiles. It has low armor and is extremely slow – assuming you plan on repositioning it. However, it does work wonders for taking out large groups in a short span. 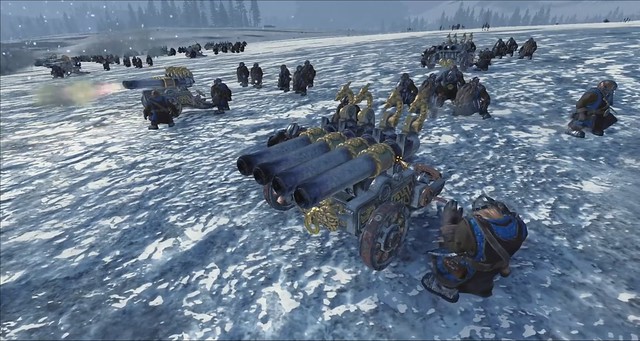 But wait! We’re not done! The Dwarf army also has the Flame Cannon at their disposal. The Flame Cannon is designed specifically for short range, high-damage output. They are not good against armored units, so don’t bother using them against the Black Orcs or the Steam Tank. Instead, they’re a high-damage artillery device used to quickly thin out infantry, making it an anti-infantry field gun. 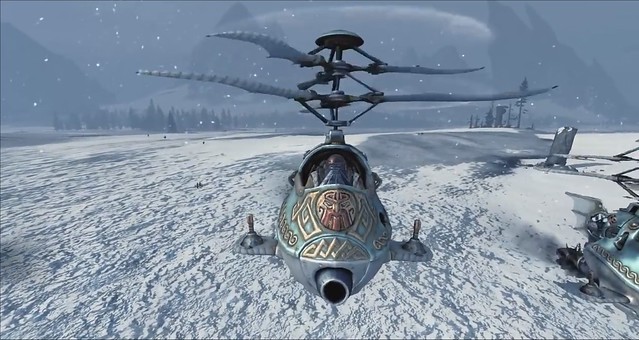 The Gyrocopter is another Dwarf device designed to thin out infantry units. It’s well armored and is classified as a flying war machine. It has high speed and decent weapon strength, but it has poor accuracy. The Gyrocopter comes in three different formats, with the second one designed specifically for armor-piercing and the last one – called the Gyrobomber – designed as not only an anti-infantry unit but is also heavily armored, good against armored units and also has armor-piercing missiles. It’s not as fast as the other two Gyrocopters but it’s still fast enough, has high weapon strength, plenty of ammunition and a decent rage.

Another thing worth noting about the Gyrocopter is that it only carries two bombs, so you’ll have to time your shots well and aim true to make the most of them. The Gyrobomber has around 10 bombs at its disposal and they’re bigger and deal more damage.

The biggest drawback to the Gyrobomber – as mentioned in the video – is that you have to micromanage their bomb-dropping, making it difficult to target enemy troops while also directing around your other units.