Creative Assembly’s Total War: Warhammer has been on the receiving end of a lot of praise from the Warhammer community and from critics alike. The game is layered with a lot of different playability, units, combat strategies and more. To help players better identify with some units and their capabilities there’s a Total War: Warhammer Greenskin guide that will help acquaint you with both the Orcs and the Goblins.

YouTuber QuickyBaby put together a useful 16 minute guide featuring all of the different units from the Greenskins, their pros, their cons, and how to best utilize them while on the battlefield. Check it out below.

The general Goblin spear infantry are the meat and potatoes of your army. They’ll do the majority of the grunt work and obviously taker the heavier losses. They have poor leadership skills, aren’t very fast and have rather low defense and weapon strength. They’re greatest asset? They’re expendable. The spear infantry is best used for setting up attacks by other more powerful units, or by staving off attacks from other more powerful enemy units. They’re a more strategic unit to be deployed on the field for setting up or organizing attacks, as opposed to being a main unit that you rely on to kill large swathes of enemy opponents.

In addition to the Goblin spear infantry, there are also Night Goblins, which use poisoned swords that can slow down enemies during combat. They suffer from the same pitfalls as the spear infantry but the poison attacks are useful for disrupting enemy infantry. A special version of the Night Goblins called the Fanatics come with a special ranged weapon that they can use in combat as well called the Spinning Loon, which his a Goblin that spins around with a ball and chain, knocking down anything in its path.

Night Goblin Archers are very much similar to the standard Goblins, only they can sometimes inflict poison damage on enemy units. Archers are quick to die, so they will need to be protected in some way if you plan on using them effectively on the battlefield.

Goblin Great Shaman is a wizard class unit. It’s a class with low armor and poor melee attack and defense, but it more than makes up for it with its speed and magic abilities. One of its standard magic attacks is using Vindictive Glare to do damage to single opponents or groups of them. Curse of the Bad Moon is another AOE style magic attack that curses opponents while also doing some light damage to them as well. It’s more of a crowd-control magic attack that scatters enemy units, which his perfect for disrupting enemy lines. 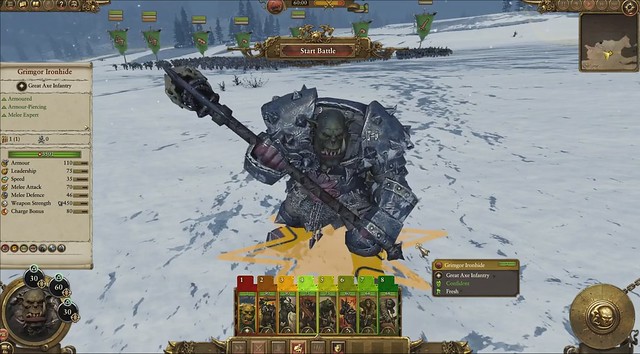 Grimgor Ironhide is a great axe infantry unit; heavily armored and a melee expert with an axe that can pierce through armor. Ironhide has reasonably high leadership points, armor, melee attack and melee defense abilities. His weapon strength is quite high even though his general speed is rather slow. Given that he’s the hero of the Greenskins, it’s mentioned that when he’s fully upgraded he can become a near unstoppable beast when taking on groups of normal infantry units.

The Orc Boyz is a sword infantry. They don’t have any special pitfalls or advantages other than being shielded. They have moderate leadership skills, and mostly subpar points in every other category. They have nothing special about them but they are generically useful during combat.

The Orc Big ‘Uns are like the ‘roided up version of the Orc Boyz. They have higher leadership skills, more weapon strength and tougher armor. They’re noted for being serious damage dealers and they’re very angry. 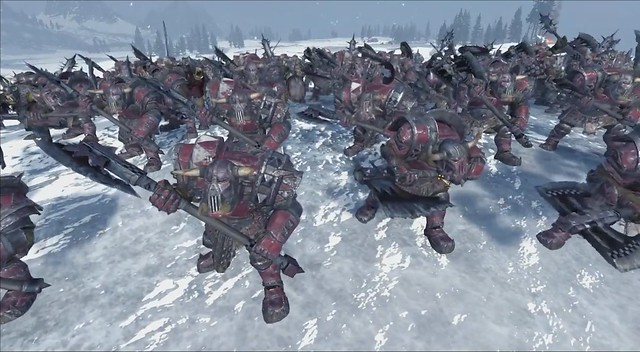 The next unit up are the Black Orcs. The ironclad Orcs are heavily armored but don’t do quite as much damage as the Big ‘Uns. They’re good for dishing out damage on infantry and taking a lot of damage from tougher units.

The Savage Orcs are completely free of armor, wearing only body paint and wielding a savage weapon. They have a special skill called Frenzy that increases their damage when their leadership is high.

There’s also a Big ‘Uns version of the Savage Orcs, where they’re bigger, badder and dish out more damage than the standard Savage Orcs.

Azhag the Slaughterer rides on a flying beast named Skullmuncher. They’re a rather delightful duo that you would probably shouldn’t hesitate to invite over for Christmas dinner. Azhag is actually a wizard unit with spellcasting abilities. It’s heavily armored, can do armor piercing damage during melee combat and inflicts terror in his opponents. While riding on Skullmuncher, Azhag is very fast and can do massive amounts of damage. He has a special magic ability called the purple void that does massive damage to opponents while also disrupting their formation, and he has spirit leech, which lasts for 17 seconds and does direct damage to multiple enemy units over a period of time.

The Goblin Wolf Riders are up next… they’re a cavalry class that are extremely fast. They don’t have much defense and their attack damage is rather low, but they most certainly make up for it by being able to quickly out-maneuver opponents.

If you’re willing to give up the speed but produce more damage and absorb more hits as well, the Forest Goblin Spider Riders are the way to go. They’re slower than the Wolf Riders but they can take more hits and poison enemies with their attacks. However, if you can build up charge momentum, the Spider Riders can easily plow through less formidable opponents. 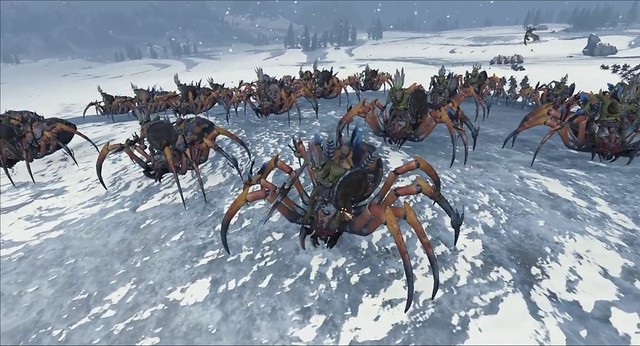 Goblin Wolf Rider Archers are another unit that can also be utilized on the battlefield with strategic excellence. Their speed and mobility combined with their long range capabilities make them a formidable unit in the hands of a master strategist. There are also Spider Rider Archers as well. One highlight mentioned in the video is that you can turn on the skirmish mode where the AI will automatically keep the Archers out of melee range from enemy units. So they will constantly sting and retreat, sting and retreat until they whittle down their opponents’ lives.

Additional cavalry includes the Orc Boar Boyz. These are mounted melee Orcs who have strong attacks, strong defenses and speed on their side. The Orc Boar Boy Big ‘Uns are the same thing but ‘roided up and offer better armor and better attack stats than the standard Orc Boar Boyz.

Alternatively there is the Orc Boar Chariot, which grants the unit armor piercing bonus and is highlighted for being anti-infantry. They can easily trample over lightly armored opponents. 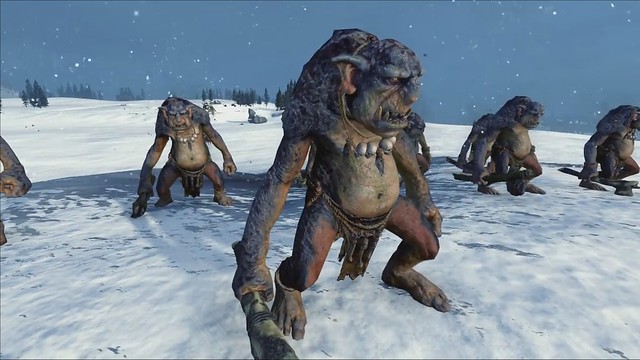 Trolls are a devastating unit. They have armor piercing attacks, and can take out large groups of enemies. They have poor leadership skills, so that’s something to consider. They also don’t do very well against a large group of small, lightly armored foes.

The Arachnarok Spider is one of the more devastating units in the Greenskins army cache. It causes terror to enemy units it faces off against, has some decent speed, and even a little bit of ranged attacks thanks to the goblins riding on its back that pelt nearby enemies with projectiles. 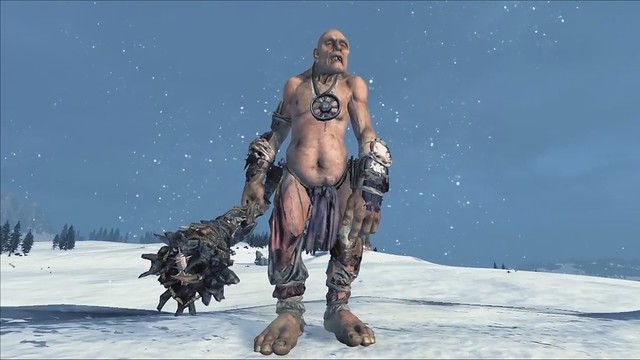 The Giant is a huge unit that can smash opponents with ease, eat opponents, and blasting through them like nothing. The video doesn’t highlight any of the Giant’s weaknesses but it’s covered in the Total War: Warhammer factions and combat guide.

Rock-lobbers are one of the Greenskins’ artillery. They are best protected at the rear of an army, and they are armor-piercing. They have very long range capabilities and are great for whittling down opponent forces before they even get within melee combat range. 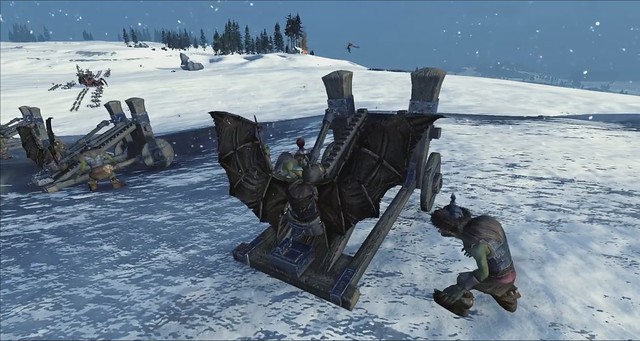 The Greenskins also have another artillery unit at their disposal called the Doom Diver Catapult. These contraptions operate by having Goblins climb aboard with spiked helmets and makeshift gliders. They guide themselves toward enemy units and suicide dive directly into them, taking out themselves and a group of infantry. They do not have armor piercing capabilities, so they’re only good for long-range attacks against lightly armored units. You can also manually control the the Doom Divers by pressing the “INS” key and directing them toward the enemy forces while controlling their trajectory and pitch.

Total War: Warhammer is available right now for PC. You can learn more about the game by paying a visit to the official website.