Two new videos have released for Mafia III. The first video is the official E3 2016 trailer that 2K Games and Hangar 13 Studios released. The second video is a walkthrough that IGN was able to get their hands on, featuring 20 minutes of gameplay tucked within a near hour long session with the developers.

First up is the main E3 2016 trailer. It shows how Lincoln went from being a war veteran to a victim of the mob. Players will assume the role of Lincoln after he pulls a Steven Seagal and becomes “Hard to Kill”, surviving a bullet wound to the head and a bruise to the ego. You can check out the video trailer below.

The trailer above actually looks pretty good. The story seems interesting that players are a victim of the mob and thus decide to create their own as a way to get revenge.

The story looks like it might be the best part of the game, with maybe the gameplay playing second fiddle to the story. This wouldn’t be much of a deviation from the previous two games, where Mafia II had a really strong focus on the story, and the gameplay was there to help supplement that story. The driving physics and atmosphere in the second game was simply outstanding, so a lot of that helped shape the fun and immersion in Mafia II.

The driving doesn’t appear to be as weighty in Mafia III as it was in Mafia II, but at least it’s no where near as floaty as GTA V, which seemed like the cars were gliding around the streets like RC cars with bolted down friction.

20 minutes into the video below, you can see the driving, the combat and some of the missions in action, courtesy of IGN. They also go over in detail how to take over territories from other rival mob bosses.

I like the way Lincoln moves; he’s got a badass quality in the way he saunters about, maintaing the kind of grim gait one would expect from a bayou version of The Punisher.

He’s an interesting character, and the added tour of service in Vietnam gives him a little extra depth and believability in his skills. Having the mafia take out his family and shooting him in the head while he attempts to exact revenge is one of those stories that easily writes itself. Heck, in a way, it really does play into the setup of him being a bayou version of The Punisher.

The shooting mechanics look okay, they certainly aren’t much of a step up or a change from Mafia II, so if you were expecting better physics, more shooting options or something on the line of Battlefield 1, you won’t find it in Mafia III. The third-person shooting appears to be serviceable as opposed to being evolved or revolutionary. 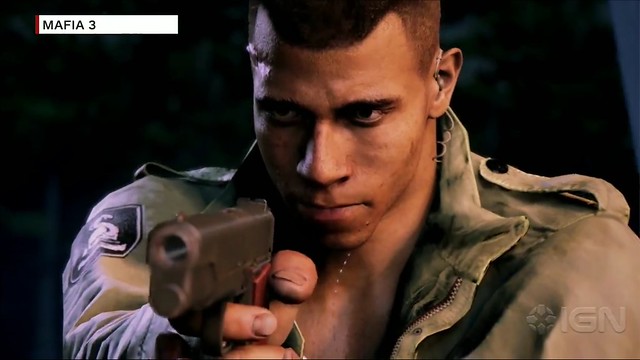 One thing worth noting is that if you don’t want too many aspects of the story spoiled, you may not want to watch too much of the IGN video. If you have no intentions of playing the game then it doesn’t matter.

Mafia III is due to release on October 7th later this year for the Xbox One, PS4 and PC. The soundtrack is pretty rocking, and even if the rest of the game turns out to be trash, at least you can count on the music being absolutely top notch. For more info feel free to visit the official website.