The time ghoul from the CW TV show The Flash, also known as Black Flash, has made its way into Rockstar Games’ GTA V.Modder OkaymanXXI has done a fantastic job of porting over the model and giving gamers a cool looking recreation of the time distorted hero/villain.

The model looks fantastic. It’s a modified version of the suit that Barry Allen wears on the CW show, featuring a red and white lightning symbol on the chest, a black leather zip-up utility suit, shoulder pads and black gloves.

The most striking visual about this particular mod is obviously the zombified face of The Flash. It’s terrifying. 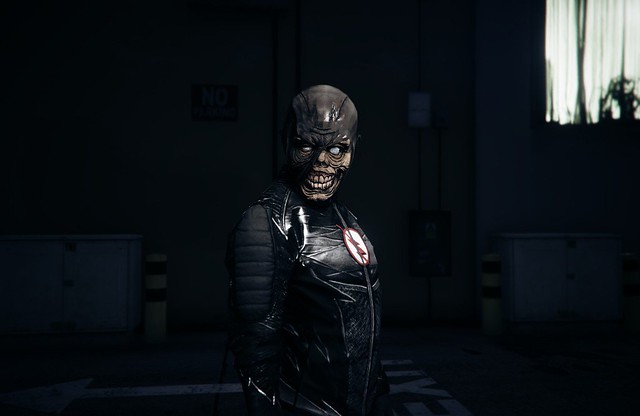 OkaymanXXI just knocked it clean out of the ballpark with the details on the Black Flash’s face. The pupil-free eyes, the wrinkled skin – the fact that it looks as if the flesh on his face was pulled back from running too fast, exposing his crooked and decayed teeth – and the torn mask all make up for a very distinct and striking image.

Given that this is such a visually oriented mod, you’re probably curious to see what it looks like in action. Thankfully YouTuber MayconCOD has a video up showing off the mod. You can check it out below.

Even if you can’t understand him, you get a really good look at how the mod looks in action in the video. It’s pretty freaking cool, especially as he starts zooping and whizzing around. There appears to be several different modes of running, and he also gets the special abilities that Barry mastered on the TV show, including the tornado and the lightning bolt throw.

There’s a lengthy process required to get the Black Flash suit from the second season and episode 23 of the TV show. You can check out the installation process and grab the download link from over on GTA5-Mods.com.