Ninja Theory released a new developer diary covering the combat mechanics and design philosophies they’re implementing into Hellblade: Senua’s Sacrifice in order to ensure that the gameplay is as chiseled and finely hewn as the story and characterization of Senua.

Ninja Theory’s product development specialist Dominic Matthews made a post over on the PlayStation Blog to go into detail about how they’re bringing the combat to life in Hellblade, and how they’ve been refining, refining and refining the combat through an iterative process of blending together hand-animation and motion capture. Whenever developers talk about animation tree blending I can’t help but get all giddy inside – it just makes games look and move so much better than before.

You can see the developer diary and the steps the 16-person team have taken to work out the kinks, iron out the fighting and further refine the combat to turn it into something both cinematic and fun to experience.

A couple of quick things:

I love the actual techniques that they gave to Senua. The sort of Wuxia upper-body dodges and parries look great. We don’t often see those used in games.

The lunging strikes and quick evasive rolls also gives the game some sense of urgency to the combat – as if Senua has to make use of her momentum to take advantage of enemies. The techniques that they chose for her look very grounded.

However, you can see where there’s still a lot of work to be done, and Matthews says as much in the blog post. While the techniques look good, there’s some obvious technical barriers that still need to be overcome. 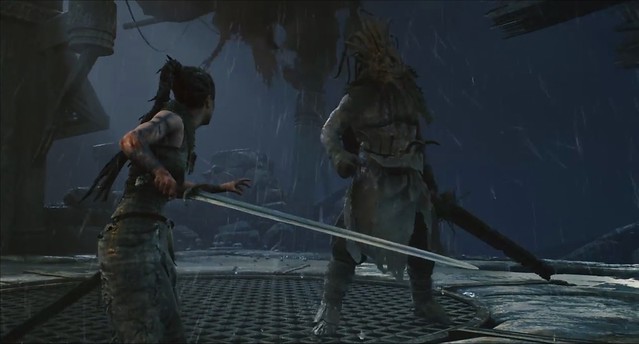 The biggest issue that was  the snap between the animation transitions.

You could almost literally see the ticks where she went from one combo to the next, and then from a strike to a dodge and then back to a strike. The transitions were blatantly distracting.

Given that it’s running in the Unreal Engine 4, I’m a little surprised they didn’t try to leverage the IKinema plugin for procedural animations a bit more. Then again they did mention that they were going for realism, so maybe they didn’t want something like the IKinema getting in the way of how they wanted Senua to fight?

The biggest problem with motion capture is that there’s always that jarring click between animation sets. It’s the one pet peeve I’ll never get over.

Also, the freeze-frames between each major strike really breaks the flow of combat. I know a lot of games like to use that these days, but for the life of me I absolutely cannot figure out why. It makes the game look as if the frames are dropping. It was awful in Star Wars: The Force Unleashed and Vindictus and it was just as bad in Bloodborne.

Then again, maybe some gamers like the freeze-frames in between combo attacks? I’m not sure. It just feels disjointed to me, especially compared to fighting games like Soul Calibur and hack-and-slash titles like Devil May Cry and Dynasty Warriors.

As a counter example to the freeze-frames used in combos for many of today’s generation of games, check out some footage of the whip and nun-chucks in action from Dynasty Warriors Online, courtesy of smellygoat.

As you can see, you can start and finish the combo to completion without any breaks; no freezing on the frames or ticks between moves while the combo is being executed. It’s like pouring water out of a vase; it’s smooth and consistent. The only time you see the transitions is at the very start or very end of a combo.

So hopefully by the time Hellblade is ready to release the combat will be as smooth as butter. That’s really what’s going to make or break the playability at the end of the day. If the combat isn’t fun then a fancy, well told story is like putting sweet tasting icing on a block of clay.

Graphically, though, Hellblade could be one of the best looking games this generation. It’s gorgeous.

You can look for the title to launch on PC and PS4.