Two weeks ago Reddit introduced the newest way for the company to make bank: VigLink affiliate links. It’s a company that cycles through vendors, allowing websites to make money through purchases made on certain click-throughs, especially links that lead to marketplaces like Walmart, eBay or Newegg. Well, this new revenue service from Reddit has run into a couple of problems, one of which is that there’s no actual disclosure on the pages where the VigLink affiliates appear.

Originally Reddit administrator starfishjenga, made a post approximately 14 days ago in the /r/Announcement sub-Reddit, explaining that Reddit would be launching the new VigLink affiliate program for both comments and posts.

“Today we’re launching a test to rewrite links (in both comments and posts) to automatically include an affiliate URL crediting Reddit with the referral to approximately five thousand merchants (Amazon won’t be included). This will only happen in cases where an existing affiliate link is not already in place. Only a small percentage of users will experience this during the test phase, and all affected redditors will be able to opt out via a setting in user preferences labelled “replace all affiliate links”.

They actually ran into some issues with the opt-out. A user on Kotaku In Action going by the handle of biggest_decision posted up a video showcasing that the opting out doesn’t work.

Some other users noted in a post on the “bugs” sub-Reddit that the “Viglink preference is not honored for some comments”. User e1ven details how attempting to opt out did not actually result in him opting out of being fed affiliate links from VigLink. Reddit administrator aoiwelle acknowledged that the bug existed and that they would be working on a fix.

However, the fix doesn’t address the disclosure issue.

For anyone who didn’t read starfishjenga’s post on the Announcement sub-Reddit, would they really be informed about the affiliate links spread across Reddit? Or that links in posts or comments would be blindly feeding Reddit revenue through a glory hole of commissions?

An example of an undisclosed link comes from a post on the sub-Reddit BuildPCSales, which has a lot of discounts from various online e-tailers and vendors. Clicking on the post’s outbound link to eBay redirected the browser through VigLink, as evidenced in the image below. 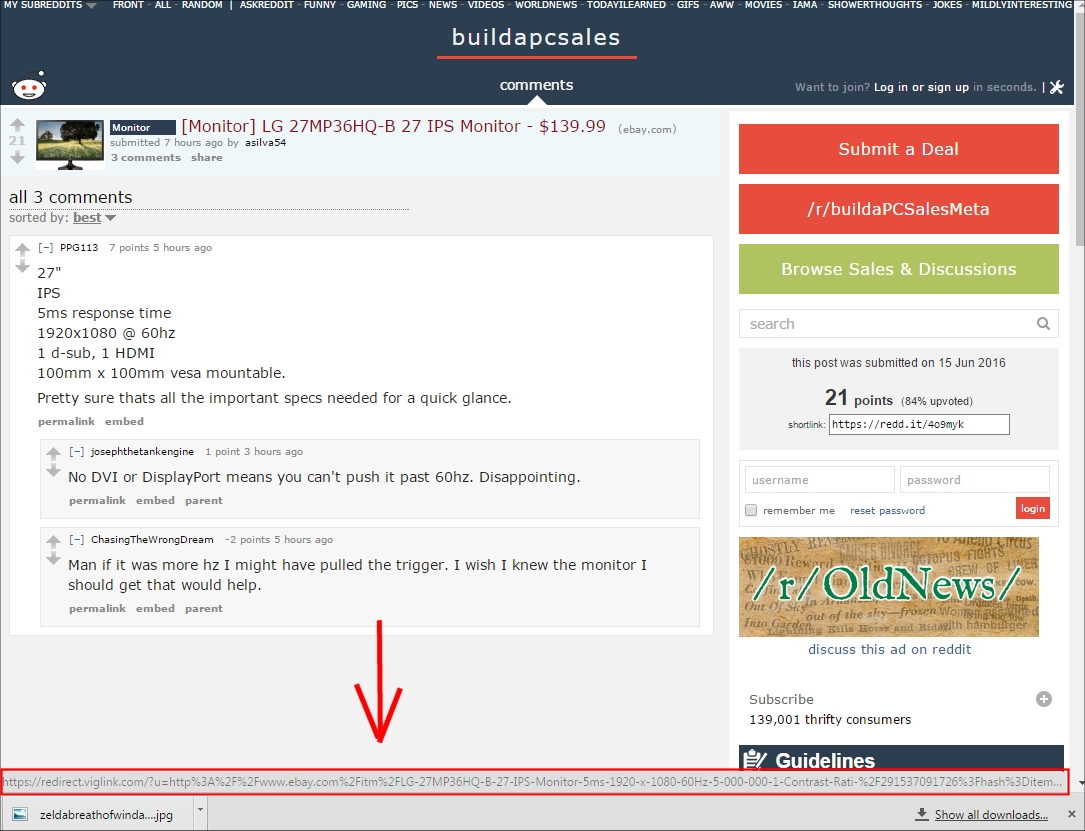 Basically, any user posting deals or links to various marketplaces are helping Reddit make money through commissions. There’s absolutely nothing wrong with that, except for the fact that affiliate links are supposed to be disclosed in the posts where they’re used, especially if the average reader, user or consumer is unaware that what they’re clicking through is an ad.

I reached out to the Reddit staff last week to ask about possibly implementing any means of disclosure for affiliate links, and a representative for Reddit quickly responded, saying…

“Thanks for reaching out — we do have a section on our Help page that explains affiliate links and how a user can opt out.”

The rep linked to Reddit’s Help page where it offers a light FAQ on the affiliate links used on Reddit, as well as opt-out procedures.

No where on the actual pages where the links are used are there any sort of disclosures. Interestingly enough, even at the bottom of each Reddit page, they only offer links to the user agreement, privacy policy and the advertising page. They don’t even offer a direct link to the affiliate FAQ.

I also asked the rep if Reddit had any plans at all to address the lack of disclosure for the use of affiliate links or if the Reddit staff would be adhering to the FTC guidelines regarding disclosure, but the representative did not respond.

According to the revised guidelines by the FTC, they have a very clearly outlined section on affiliate link usage and disclosure. Specifically, they updated the section to address the very thing that Reddit is doing, with the sub-header being “What About Affiliate Or Network Marketing?”

If you don’t have time to read all of it, the relevant section reads…

“In some instances – like when the affiliate link is embedded in your product review – a single disclosure may be adequate. When the review has a clear and conspicuous disclosure of your relationship and the reader can see both the review containing that disclosure and the link at the same time, readers have the information they need. You could say something like, “I get commissions for purchases made through links in this post.” But if the product review containing the disclosure and the link are separated, readers may lose the connection.”

In this case, there isn’t even a link about the affiliate commissions on the pages where the affiliate links are being used. Even more than that, they’re being embedded into comments where a lot of users on Reddit may not even know that comments contain advertisements.

So far there aren’t any clear or conspicuous reminders about VigLink’s content being used in Reddit posts and comments unless you actively go searching for the information.

Even more than that, starfishjenga revealed that sub-Reddit moderators are not able to disable affiliate links on their subs, explaining in the original announcement post…

“Can I switch this off for my subreddit? Not right now, but we will be discussing this with subreddit mods who are significantly affected before a wider rollout.”

At the time of writing this article, the VigLink redirects haven’t been popping up recently. It’s possible Reddit is tweaking the embeds following the bugs that prevented users from being able to opt-out of having affiliates fed to their account.

A post on Kotaku In Action thoroughly explains how you can opt out of the VigLink affiliates if you don’t want your account or browser habits being tracked.

If you feel this is something the FTC should be made aware of, you can contact the commission using the FTC complaint assistant form. Alternatively, if you need to read more about native advertisements, endorsements and affiliate links, feel free to check out the Federal Trade Commission’s guidelines.