Comcept’s side-scrolling platformer, Mighty No. 9, launched amid a flurry media attention, much of it was not good. However, when consumers finally managed to get their hands on the game and share their thoughts about the title, things quickly became clear that Mighty No. 9 had potential but it wasn’t utilized in the best of ways.

The Unreal Engine 4-powered side-scroller is supposed to be the spiritual successor to Mega Man. It features Beck, a robot not unlike Mega Man. He can absorb enemies with his dash attack after stunning them with his blaster, and he can also acquire powers from enemies he defeats.

The game features 12 different levels, a single-player challenge mode, three difficulty settings, a New Game+ for additional replayability, a Boss Rush mode where players can battle through each of the game’s bosses back-to-back on a timer, a two-player online race battle where players compete head-to-head to see who can beat the campaign stages the fastest, a two-player online cooperative challenge mode where one player takes on the role of Beck and the other player takes on the role of his female partner Call, and online leaderboards.

The online components caused long delays for Mighty No 9, as the team worked hard to try to figure out how to fix the problem. They eventually managed to get things sorted, but only after multiple delays and a lot of radio silence.

Now that the game has launched for home consoles and PC, gamers are starting to chime in on the game as a finished product, and whether or not it lives up to the $3.8 million dollar crowd-funding investment.

Users like Tehald on Steam do a good job of breaking down what works and what doesn’t for the game after putting in 18 hours into Mighty No. 9. He mentions that everything outside of the gameplay isn’t very interesting and that many of the gameplay elements work against each other, including a spammable dash button that can be used infinitely, or power-ups that don’t really have much use if you just rely on the spammable dash…

“Anything not related to game play is bad. The story is bad and simple, the cutscene look akward. Characters are 2 dimension and have 0 devellopement the music is okay.”

Trachinus Draco also liked the gameplay, but felt as if the difficulty was a little steep for casuals and that the characters and AI design could have used more versality, writing…

“I think the characters could have used a bit more work. Like the faces for example ’cause they look awkward.” […]

“On the middle of the lvl there’s usually a place or two where mobs appear from thin air. I’d rather if there was mid lvl bosses like in Megaman Zero for example cause they’re much more fun to fight than whoever thought of this mob appearing from thin air ♥♥♥♥.

“I think difficulty is alright but maybe too hard for some casual players. With some practice the lvl’s are easier to play”

“It’s not perfect. Like I really miss my wall jumping and wall jump dash”

Austinism has a thorough examination of Mighty No. 9, explaining that the game isn’t really like Mega Man based on what some fans may have been expecting. He points out that the levels aren’t very memorable but they are punishingly hard, and that the dash mechanic is”kinda cool”. He sums it up by saying that he understands why backers would be angry with the finished product, and that people who aren’t going in expecting a Mega Man game might be pleased with the results…

“If I was a backer and paid more than 20 dollars to back the game, I would be pretty angry, so this is a review from someone who watched the development of the game from a distance. If you are looking to buy the game to be expecting it to be a spiritual successor to Megaman, do not get this game. If you are buying this game expecting it to be a different experience from Megaman, you might just get that from this game.” 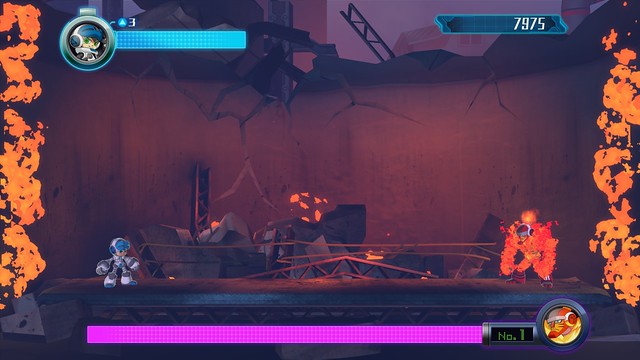 Nicole24 does a really good job of breaking down the differences between Mega Man and Mighty No. 9, with one paragraph explaining why some of the changes don’t really work when it comes to maintaining a flow and pace with the game, writing…

“The issues come down to that what it tries to do differently from Megaman doesn’t really come across well, and what it tries to do like Megaman it does poorly. Being able to air dash infinitely just sort of convolutes the flow of the game. There’s one part in the water level for example where you can legitimately air dash over an entire section and I’ve seen people who know nothing about MN9 do it their very first time. Also the dash mechanic being forced to kill enemies is just a really subpar idea.”

PC gamers like Nicole aren’t alone in their summation of the game. While there are some 10 out of 10 user reviews on Metacritic posted to “balance out the 0 out of 10s” the more moderate and level-headed user reviews explain the good and bad about the game.

Mayaman81 explains that the Xbox One version of the game is playable but aspects of the game are designed poorly, such as the graphics and the instant-death traps, but he still enjoyed the challenge of getting through a flawed but somewhat enjoyable game, writing…

“Game design is complicated. Let me get one thing clear: You will die, a lot. and often it will not be your fault. Instant death spikes and bosses with supposedly easily dodged K-O attacks are in no short supply. But it was never enough for me to throw my control. I just got angry I didn’t give up.

“[…] You quickly realize your dash is over-powered and can bypass certain sections with ease, and then you realize the developers realized this as well and placed the purple insta-death spikes where you’d dash into. Reset, gnash your teeth and go through the level properly. I know I sound down on it, but if you’ve played Mega Man 9 and 10 you know the frustration leads to immaculate pride upon succeeding.”

XboxTavern echoed similar sentiments, stating that the game isn’t terrible and can be fun but it’s also not quite what was expected from a $3.8 million game, especially when compared to games like 20XX…

“For a game that was built upon over $3 million in public funding, I’m genuinely shocked. It’s not a terrible game, but it’s not the game that many expected it to be either. There’s very little innovation and almost no emphasis on the core identity. It plays well and looks good, don’t get me wrong, but I’ve played games that have taken much less funding and offered much more value.”

Joeveno ignored all the criticisms about the game and gave it a 10 out of 10, saying…

“as a megaman fan I recommend this because it’s a fun game after all if you want a good platform with smooth 60fps then just buy it, it’s cheap and challenging at some points.”

The “smooth 60fps” may be the case for Xbox One and some PC users, but it isn’t true for everyone. 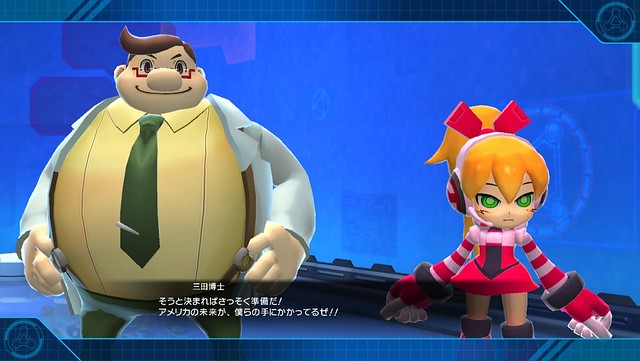 There have been consistent reports from Wii U owners complaining about the game having optimization issues.

Promotheus explained that the Wii U version suffers from a 3ms up to a 5ms input latency delay, making it nearly impossible to pull off some moves or overcome traps and enemy attacks. He also states that he played the beta version on PC so he was able to compare how the game was supposed to run, writing…

“The WiiU-version is utterly unplayable at this time. Did they even test it any more than seeing if it worked at all? It doesn’t seem like it. The framerate is inconsistent and very choppy, I don’t think it ever reaches 60 fps. There are huge frame drops at the worst moments, these are bad because they are not like NES lag where everything slows down, the game just drops upwards to 1 full second (!) of frames which throws you off something fierce.”

Some PS4 owners also reported having frame-rate drops on Mighty No. 9, with 8BiTninja explaining…

“It is fun and reminds me of old school platformers. I am disappointed with the frame-rate drops but other than that I am having a lot of fun with this game.

“I would give this game an 8 if it ran better, but there is really no excuse for a game that is not graphic intensive at all to run like this, especially with all the time they had.”

Zidane_Mina also reported frame-rate issues on the PS4, saying that it felt more like a throwback to Mega Man X rather than the standard Mega Man series, writing…

“[…] the way the gameplay feels is somewhat clunky. There’s emphasis on speed on Mighty No. 9 that somewhat mixes things up a little, but level design makes out of this a chore sometimes.”

“Mighty No. 9 production values are disappointing: the game suffers from noticeable frame rate issues that should not by any reason be there, specially given the lackluster graphics and uninspired cholor palette and level size.”

“Gameplay wise it feels solid, but it lacks the balance and pin-point precision of its source material (You know, Megaman).”

“The worst aspect of this game is the way how it presents its story: boring cutscenes with dialog so uninspired and slow paced you have no desire to watch them and listening to them again. Characters are dull, annoying at worst: bidimensional at best.”

There are some users giving the game a 10 out of 10 saying there are no frame-rate issues, no input latency issues, that it’s the best game out there for Mega Man fans and that all the critics are “wrong!!”. There are also an ample suply of 0 out of 10 reviews saying it’s the worst game ever made.

The majority of the reviews, however, note that Mighty No. 9 has potential; that the game doesn’t live up to its $3.8 million budget; that the graphics are poor, the frame-rate is shoddy at times and the story is uninspired and uninteresting. Many moderate reviews praise the gameplay potential, the tight controls (when input latency isn’t an issue) and that the dash mechanic could have been much cooler if it were better refined.

Ultimately most middle-ground gamers call it somewhat fun but ultimately disappointing. A good number of non-Mega Man fans say it’s worth the $20. Many die-hard fans say to skip it. Most moderates say to wait to get the game for $10 when it’s on sale.

Mighty No. 9 is available right now for $19.99 for the Xbox, PlayStation, Wii U and PC platforms. For more info feel free to visit the official website.