Frogwares let loose their latest game in the line of Sherlock Holmes games with the title The Devil’s Daughter. It features a number of different cases for Sherlock Holmes to solve and for gamers who have the title on Xbox One, PS4 or PC, they can get some help solving some of the cases with a complete gameplay walkthrough.

There’s a multi-video playlist put together by YouTuber TheApexHound, which you can check out below. It covers the five main cases in the game, with the title clocking in at more than seven hours.

In the first case when profiling the boy, he’s been recently weeping, he has a malformed left arm, his parents are caring, he’s malnutritioned and the boy, Tom, is only eight years old.

After going to the boy’s house and examining all the evidence, head to the pub and watch the man in the corner by front door on the right hand side. Sit at the bar and watch him using the fast forward time button – after half an hour he’ll get up and leave after balling up a piece of paper and throwing it on the floor. The paper is about a missing person named Mr. Strowbridge.

Exit the bar and you’ll need to play the little boy and tail the man down the street. Use the cover to avoid being spotted.

After doing an Assassin’s Creed-style tailing segment and a shoe-shine mini-game, you’ll eventually end up at a large house.

Make a drawing of the coat-of-arms when spying into the office window from outside the mansion, and then spy on the man inside the home and make a note of the food and the fact that only two people are living there.

When you get back in control of Sherlock Holmes, proceed to research the coat of arms by scrolling over to the “Research” tab and check under “Marks and Symbols” to learn more about the symbol.

You’ll take a journey to Lord Marsh’s place where he’s profiled. Holmes notes point toward Marsh feeling ill due to a tightening in Lord Marsh’s chest, he’s taking pain killers and he’s with his physician Ruben Fisher. Lord Marsh is a wealthy man.

After investigating Marsh’s place and asking him questions, you’ll need to head back to Tom’s place where there’s a chest he’s discovered. You’ll need to grab the key and the military Wolfjack badge, and use the Holme’s Eagle Vision to check a bucket with a rag in it that has oil on it.

Find George Hurst’s list and everyone in Group ‘S’ needs to be underlined, they will have a date and an ‘X’ by them. 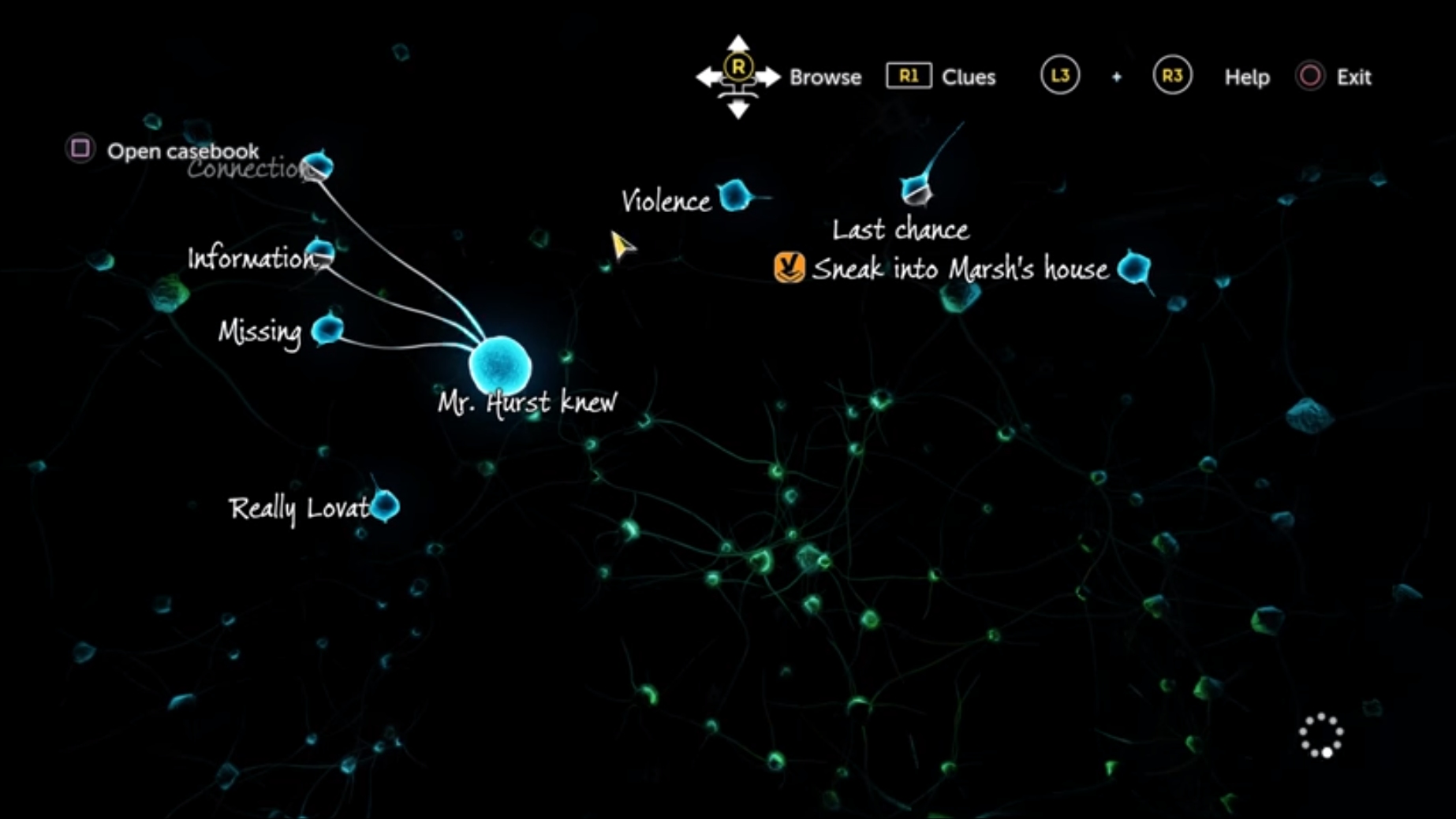 Use Sherlock Vision in the room where the files are and you’ll notice that a rifle from the mantel has been removed. So you’ll need to use the deduction powers to connect various points of information, connecting many of the different points of interest until you get the mission to sneak into Lord Marsh’s house.

After examining the office you’ll find that behind one of the middle paintings on the wall reveals a secret safe. Simply move the device around to find the spike in sound on the safe to get the right tumbler location. 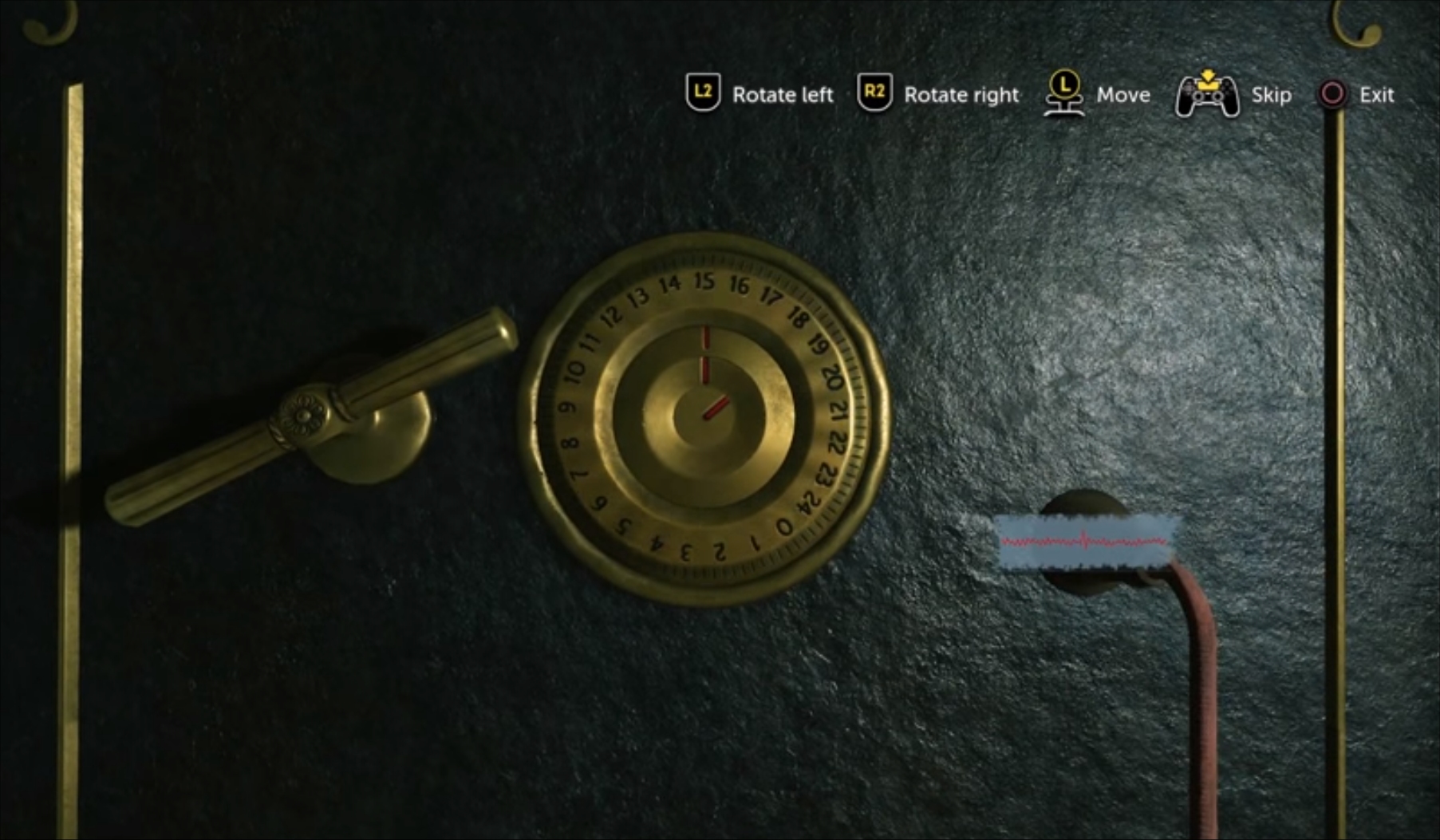 You’ll also need to search Holmes’ archive under the “Encyclopedia” tab and you’ll need to check under
“Botany” to read up on Grunston’s Oak.

Head to the map on the wall next to the door, and you’ll need to search up Epping Forest on the map.

When you get to the forest you’ll need to try to survive in a mini-game that involves hiding behind rocks while dodging the gunfire by the hunter. Make sure you avoid stepping on bear traps and to keep the using cover to recharge Sherlock’s stamina. You can dodge the bullets by moving out of the way and just before the sights hone in on Sherlock.

After making it to the cabin it turns out that Lord Marsh was hunting down paupers and killing them. George Hurst attempts to stop Lord Marsh and players will have the option to either stop George hurst or Lord Marsh.

The second case is called the “Study In Green”. Before stepping out, you’ll need to disguise Holmes and put him on his “Sports attire”.

Play the game of bowls and attempt to beat Arthur the invincible. If you can’t beat him, just skip through it and exit and go back home.

Use Holmes’ archive to search up the Mayan origins under the “Geography” tab.

Head back to the club and examine Zacharias’ body. Check his pockets and his belongings so Holmes figures out that the thief who killed Zacharias did not want his valuables.

When you talk to Sir Charles Yellingham, you’ll find need to profile him in order to learn that he’s both socially and politically active.

You’ll need to reconstruct the death of Zacharias by numbering the events in their proper order. After that you can head to the Scotland Yard to examine the body of the victim.

At Scotland Yard you’ll need to decipher a puzzle involving Mayan symbols. The end results should look like in the image below. 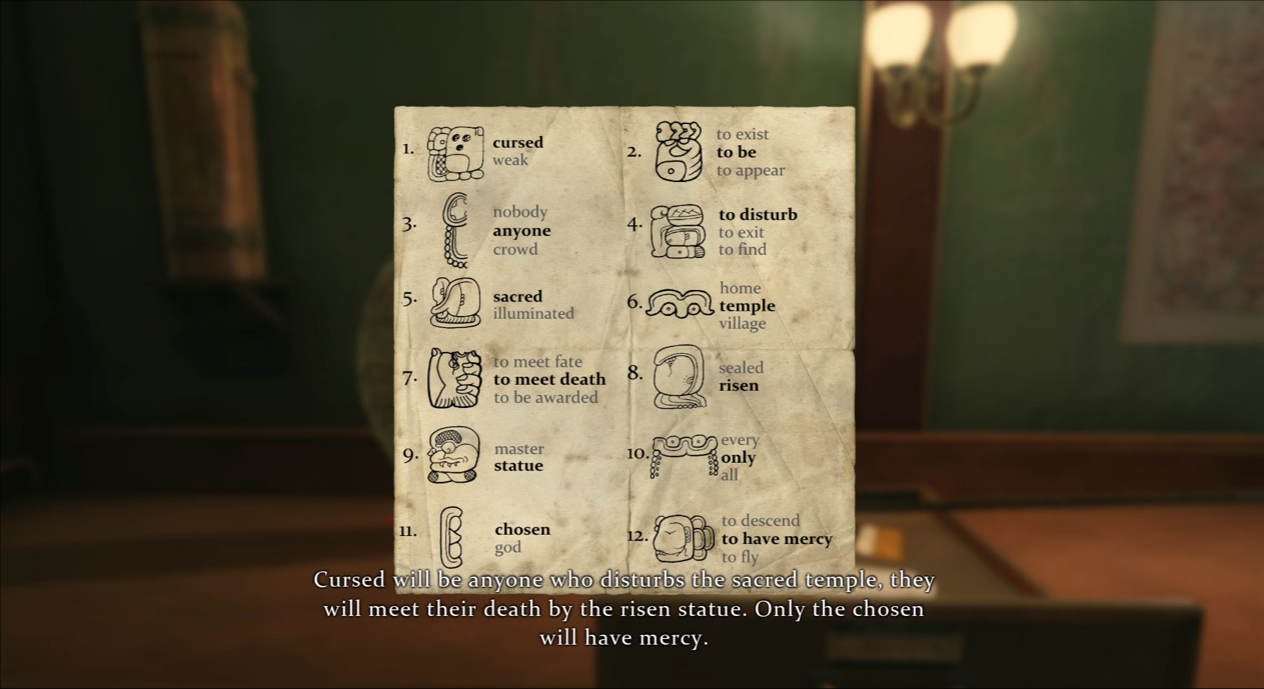 When you go to talk to Inspector Lestrade and profile him, he has wine on his collar and he’s having a tryst with a lady friend. If you point these things out you can get the search warrant to enter into the membership-only club.

Investigate the club, take the fake photo off the wall, and examine the artifact with the 1881 date on it. You’ll need to talk with the club owner and then bring the photo back to Watson so he can examine it and reveal that there was a fourth person in the photo.

You’ll have to do a profile of Albeit when you reach the hospital. Both of his character profiles for his eye and the lesions on his wrist are from a disease. 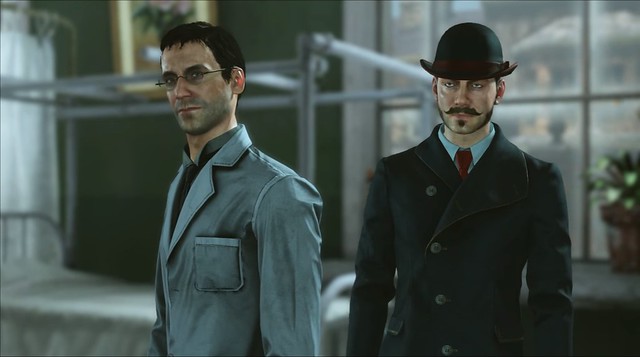 You’ll need to head back home after Albeit makes an escape from the hospital and find out where he’s located. You’ll need to first locate 21d Brook Street to get to his location. You’ll be able to find Brook Street by narrowing down some of the four places he regularly visits within a small proximity.

You’ll need to engage in a rather difficult mini-game involving shooting at the arrows being fired at Holmes while at the same time moving Holmes closer to the stairs in order to rescue Albeit.

After talking with Albeit you’ll then need to head back to Marley’s office. A platforming puzzle ensues when Holmes climbs down from the ceiling. You’ll need to move the crate over between the two platforms where Holmes is standing and then lower the cage on top of the crates. You’ll then need to move the crate and cage over to continually help Holmes get across the platforms .

After completing the platforming puzzle you’ll need to investigate the office and open up a case for a Mayan dagger – Holmes must forge a dagger by going through a mini-game. Afterward the dagger can be used to open a hidden room where there’s another gear puzzle that needs to be completed.

After figuring out that Bernard Marley makes automatons equivalent to the animatronics from Five Nights at Freddy’s, and Holmes figures the killer is either Marley or Charles.

For the Infamy case, the first thing you need to do is read the character of Orson Wilde. He’s a self-affected, attention-seeking actor.

After Wilde exits from the room you can exam the contents of his luggage, including his makeup.
There’s a second character profile that commences involving Mary Sutherland. She has poor eye-sight and didn’t notice she has mismatched shoes. She also has an engagement ring and she is rich.

You’ll need to use Holmes’ deduction abilities to connect the details after finding out that the letters were both written by the same person. Holmes realizes and comes to the conclusion that Mary’s stepfather is actually pretending to be Hosmer Angel in order to gain access to her money. You have the option to either tell Mary the truth about her stepfather’s rotten ways or hide the truth from her. 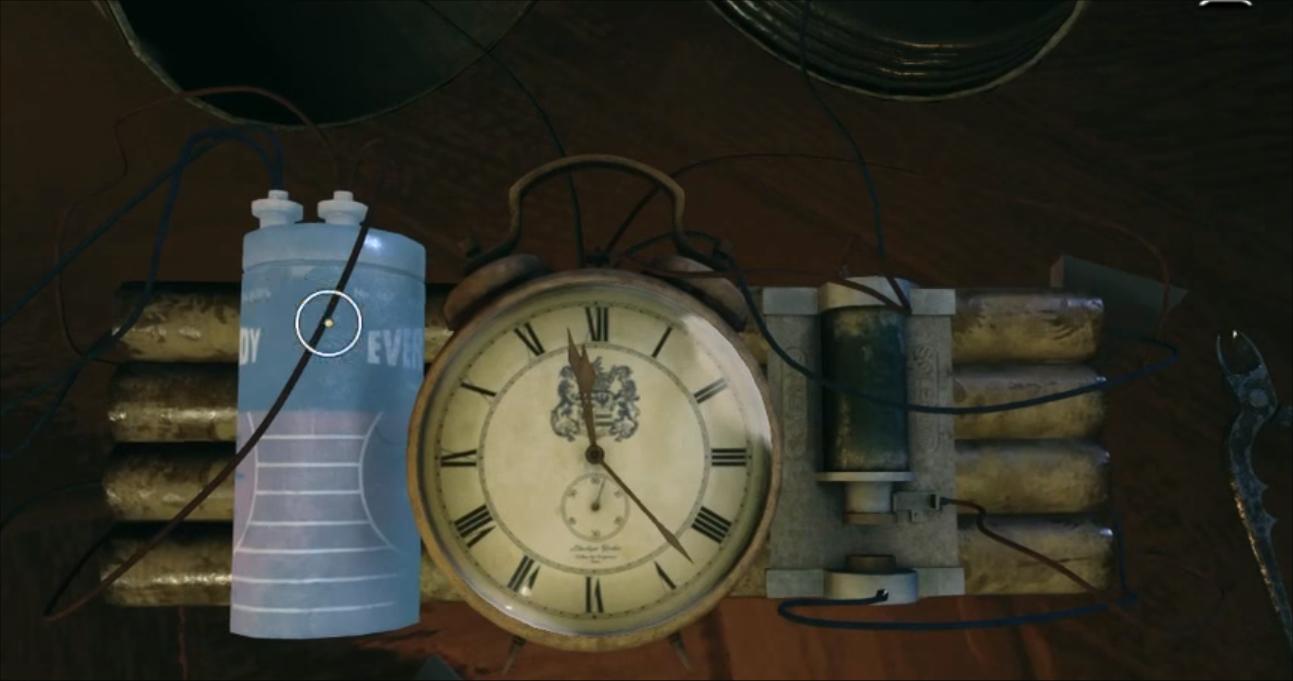 When you encounter the bomb, you’ll need to disarm it. Disable all the blue wires first and then proceed to disable the red wires. After that, you can disable each of the other wires.

After breaking into Alice’s apartment, Sherlock will discover more about his neighbor, including the discovery of her occult-style room setup in the other room. Sherlock realizes that Alice practices “spiritualism”.

After looking through the news clippings and reading through letters, Sherlock will need to change his clothes and head to the Green Dragon Tavern disguised as a bandit. You’ll need to put on the “Bandit Outfit” from Sherlock’s wardrobe.

Head to the tavern and lounge around the posts and tables inside the pub, using the small mini-game to listen in on conversations from those sitting at nearby tables.

You’ll need to create a distraction by using Sherlock’s Batman vision to create a scenario that involves knocking over the hat of the guy sitting at a table by himself, grabbing his knife, cutting the rope in the jacket of the cheater playing cards, and then walking past the guard standing by the door to the secret location.

One segment that had a lot of people stuck was the fight scene involving Orson. You have to first push over the stool to trip up the pursuer. Proceed to hit the next guy over the head with a bottle. Next – and this is the most important part – flip up the hat of the man you hit with the bottle. While the hat is still flying in the air, throw the hat at the bartender who aims the shotgun at Holmes. Proceed to hit the hoist holding up the plank over the doorway so the bartender shoots the plank instead of Orson and Holmes.

You’ll also need to do a profile on Jack Cole. He’s a self-affected fist-fighter.

Ask him about the “valuable loot” from your evidence stash.

You’ll also need to visit Jeremiah’s Mother, and in doing so he has a home that contains many religious pictures and symbols and she is short-sighted, wearing spectacles with strong lenses. You’ll need that when it’s time to profile her.

You’ll need to reconstruct a torn up letter from the trash bin. You can see how it’s to be reconstructed with the image below. 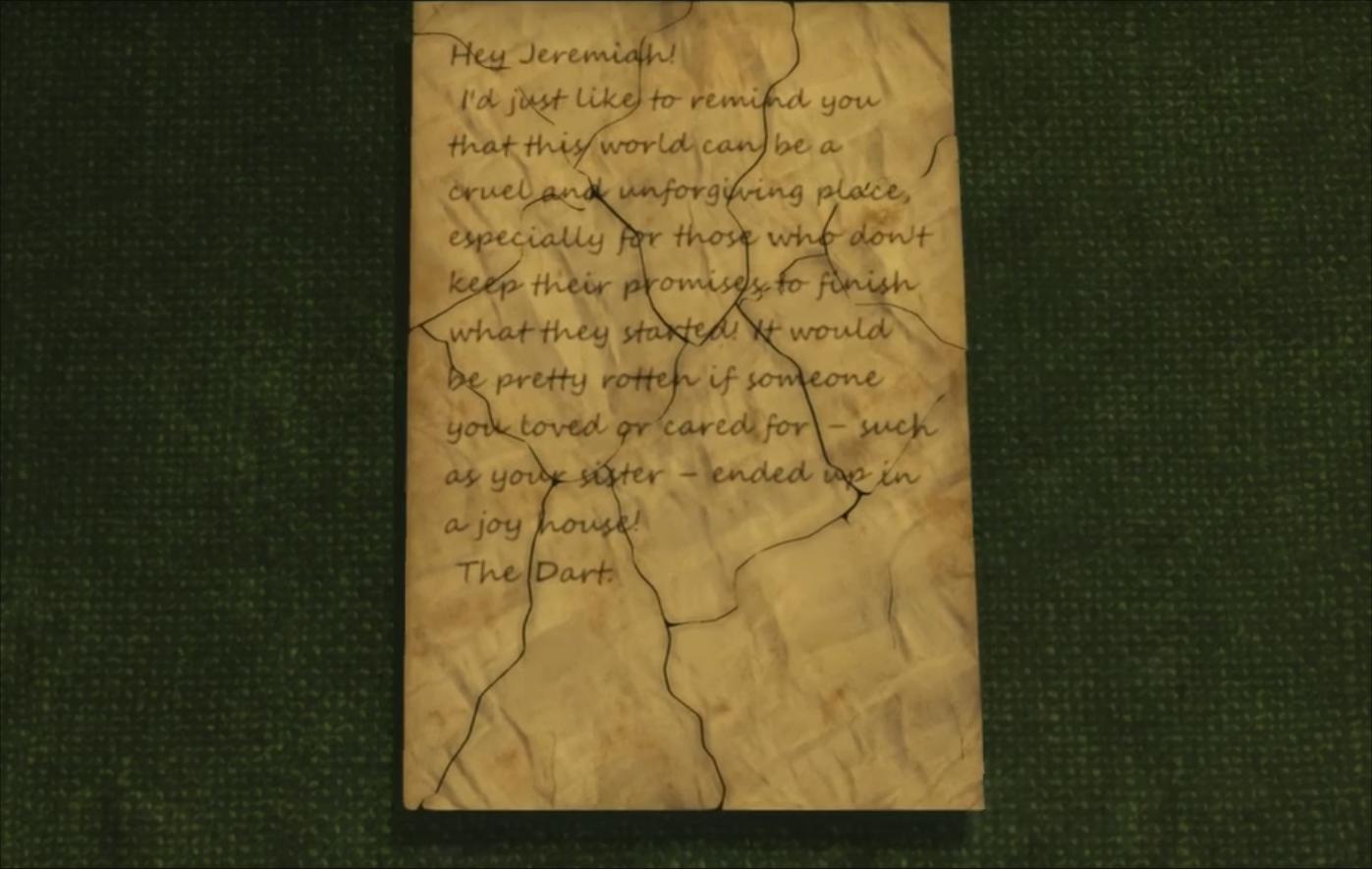 When you get the opportunity to interrogate Percy Flemming, the character profile consists of him having a scar from gang warfare, he’s an affluent man who is both fashionable and eccentric. He runs brothels and received his fair share of knocks from spending seven years in Westgate prison. He was only recently released.

You’ll need to ask “The Dart” about Jeremiah’s letter showing that “The Dart” threatened him.

Eventually you’ll need to leave and trace Orson Wilde’s carriage to the Patrick’s Abbey where you’ll need to utilize some stealth tactics to get inside. When you get further inside you’ll need to ring the gong to distract the guards and then climb up the platform to get past them.

From here, you can use Holmes’ deduction screen to begin to piece together who the culprit is behind the attempt on Holmes’ life.

At the end of the investigation there are three main suspects, including Orson Wilde, “The Dart” and Jack Cole. Depending on how you feel about the three suspects depends on which outcome you might go with. However, the culprit is Percy “The Dart” Flemming.