A dancing, music-rhythm, turd-shooter called Super Duper Party Pooper is making its way onto the Steam store starting June 6th. The game sees gamers chowing down a lot of food to the rhythm of the music, and then projectile-pooping the feces onto the faces of dancers who are partying in the background.

Rudder Games has the store page up right now, but purchases aren’t available… yet. At the moment they’re handing out game keys to Super Duper Party Pooper, giving streamers and YouTubers an opportunity to play the game and broadcast it to the world. The concept is pretty simple, as described above, but you can see what it looks like in action with the trailer below.

If that only gives you a teasing taste of the trajectory-powered turds, then you might want to check out an 11 minute gameplay video that was recently uploaded by YouTuber Indie Gaming News. They offer a complete, unedited look at some of the stages where players will take hold of their character, stuff their mouth with food, and then proceed to exercise the ability to make feces fly. You can check out the video below.

So yeah, the objective is to get the poop onto the faces of the dancers, and hopefully the weight of the poop will ragdoll them down to the ground, incapacitating them for the rest of the level.

There’s nothing more dangerous than a toxic, heavy duty dumping.

The replay values for the game are found within the rhythm-based mechanics that allow players to import their own music. So it’s possible to dance and poop at the same time (though hopefully you’re not planning on doing both simultaneously in real life). 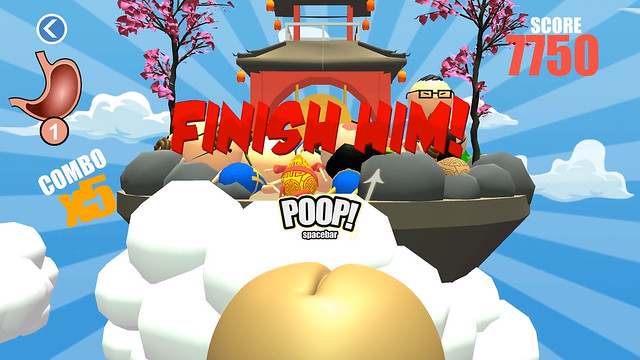 Creating your own character can also add a bit of personality and personalization to the game, so you can better identity with the buttocks out of which the poop flies.

Players will travel the world, pooping on people at the parties and enjoying every minute of it. For those of you out there with a fascination for feces… or you just want to unleash that inner coprophiliac through the colon’s calvacade of creamy chocolate, you can look to get your hands on Super Duper Party Pooper starting June 6th.