The trailer is only a minute and a half long, but it gives gamers a look at Wonder Woman’s skills and abilities in the upcoming fighting game. You can check it out below.

First up, Grodd is really starting to grow on me. I love his voice acting, I think his look is superb, and his animations are absolutely top notch. I would venture to say that this is probably the best depiction of Grodd I’ve seen. His gait harnesses an element of being both regal and primal at the same time, making him a formidable force of nature to behold on the screen.

Second up, what the heck happened to Wonder Woman’s face?

I was expecting more of a squared jawline, less jowl and straight cheekbones. Heck, if they weren’t going to mirror her design on Lynda Carter I wouldn’t have minded if they based her on Gal Gadot (although in my opinion the one real life female who seems to have a face perfect for Wonder Woman is Gina Careno).

They’ve got a lot of work to do before the game releases next year, so hopefully Wonder Woman’s face is part of that work. I wasn’t alone in being taken aback by the features plastered on her head. The YouTube comment section also noticed how disconcerting her features were as well.

Regardless of her face, her moves are absolutely dynamite. 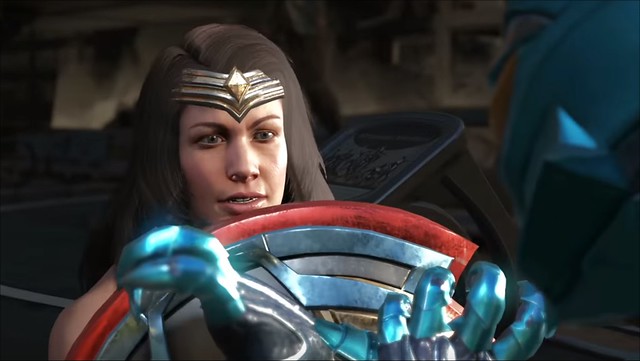 The use of the lasso is slick. I love the way she incorporates it with the actual attacks, wrapping it around her leg to draw in her foes with extra leverage, while also quickly switching between her sword and shield attacks to flesh out her combos. NetherRealm did more than a-okay job with her moves, animations and fighting style.

Another thing is that they didn’t completely get rid of her panties and replace it with all long-legged pants. She still has her swimsuit attire as an options. With the Social Justice Warriors screaming up and down the isle about trying to cover women up and the whole fallout over Frank Cho and showing Wonder Woman’s swimsuit under her skirt, for a minute I thought NetherRealm would have just given her an assortment of armored pants as part of her attire.

It’s sad in this day and age when a woman being able to wear a skirt in a video game without offending someone is now considered progressive. 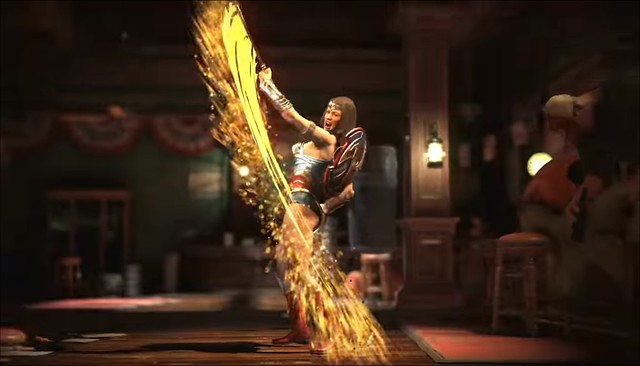 The rest of the trailer gives us a brief look at the Blue Beetle. He’s a standard tech fighter with some bug-inspired moves.

Anyway, Injustice 2 is due for release only on the Xbox One and the PlayStation 4 in early 2017. You can learn more by visiting the game’s official website.