The game has been restored with 1080p up-rendering, 60 frames per second refresh and a lot of the current day amenities that have helped make the PlayStation 4 the number one selling console during the eighth generation of gaming. The video below does a recap of how Santa Monica came up with the game, how they designed some of the features and what they felt about making that first entry on the PS2 that would later catapult them to fame with God of War.

One of the most interesting things about Kinetica is that none of the people in the studio seem especially impressed with it. They seem like it’s a game that was made that was decent enough for what it was, but there’s practically no enthusiasm there.

It’s weird because the game looks functional and it almost looks fun, but their apprehension about praising their own game makes me a little apprehensive about playing it. 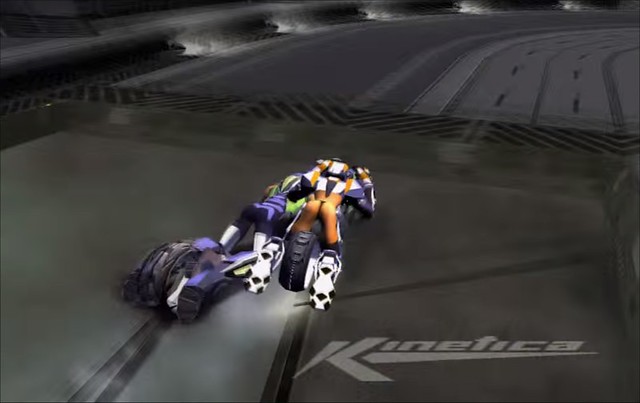 To be honest, I didn’t even know this game existed. It was one of the many, many, many titles that came out for the PS2 back in the day that helped build up an extensive library of nearly countless mid-budget games that helped give just about everyone something interesting to play.

The style and design reminds me of a mix of Forsaken meets Extreme-G. Also, the female character costumes would never fly in today’s industry. It’s amazing how much times have changed and how gaming has “grown up” by adopting more Islamic traditions when it comes to how the female form is portrayed in gaming.

Anyway, if you want to experience the blast from the past with Kinetica, feel free to grab a digital copy from the PlayStation Store. The game features 12 anti-gravity tracks, nine kinetic suits, stunts, drafting and obstacles to overcome, along with local split-screen options.