A few days ago when news broke that TmarTn and ProSyndicate were behind the CS:GO Lotto website, making several videos of themselves gaming their own system as a form of advertisement, it shocked the YouTube community. People like TotalBiscuit and Boogie2988 expressed their disappointment at how unethical their conduct was, how these men of influence could deceive children into a get rich quick scheme.

PsiSyndicate (not to be confused with ProSyndicate), real name Lewis Stewart, came forward with his own confession revealing a promotional deal he had with a gambling site called SteamLoto.

He took the time to tell his subscribers that his October 14th, 2015 video CS:GO — AWP Dragon Lore Unboxing! and their June 21st 2016 video CS:GO — AWP Medusa Unboxing! was not only sponsored, but the results of those unboxing videos were rigged. He’s since updated them to state “This video is rigged, use the website as your own risk!” throughout as an annotation.

It was clear that PsiSyndicate thought it was best to come forward directly about his past deals.

“All people make mistakes, so here is my confession and my follow up to my mistakes. We can learn from them and grow from them, I hope to do so. CSGO is a tempting, weird place for all CSGO YouTubers and Twitch streamers alike, I fell down a weird place and don’t plan on going back there. All paid for videos should be clear, and will be from here on out! Why even make a PsiSyndicate exposed video? I don’t know, no one else did :(“

Compared to TmarTn’s lack of an official public response as much as 24 hours later, retracting a full confession video about the incident, and even making the CS:GO Lotto playlist private? PsiSyndicate’s circumstances are completely different. He had no need to come public in the first place, he did it on his own volition, to make his situation a lesson.

He was accommodating enough to provide the emails detailing his deal with SteamLoto.  See here.

This first one was the set-up in regards to his October 2015 video. When it comes to June 2016, the website was renovated. Seemingly as a result of Psi’s first deal, SteamLoto wanted to tap the YouTube well again. You can see there was an attempt by Psi to be more transparent.

If you can’t read the text or need a quick transcription, the conversation basically was stated as follows between SteamLoto’s Andrew Pyramov and Lewis PsiSyndicate.

Andrew: Hey. So we have updated our site and there won’t be any complications, that rose up the first time your video had been released. And I was wondering if you could make another video on SteamLoto.

Psi: Ok he’s the idea I’ll propose, if you don’t want to that’s fine, but how about (purely to attract viewers while advertising the sites functionality), you can set up (if you even can) me to “unbox a ruby/sapphire”, but set it up in a way where it’s transparent it was rigged of that makes sense. I don’t keep the knife, blah blah, idk. 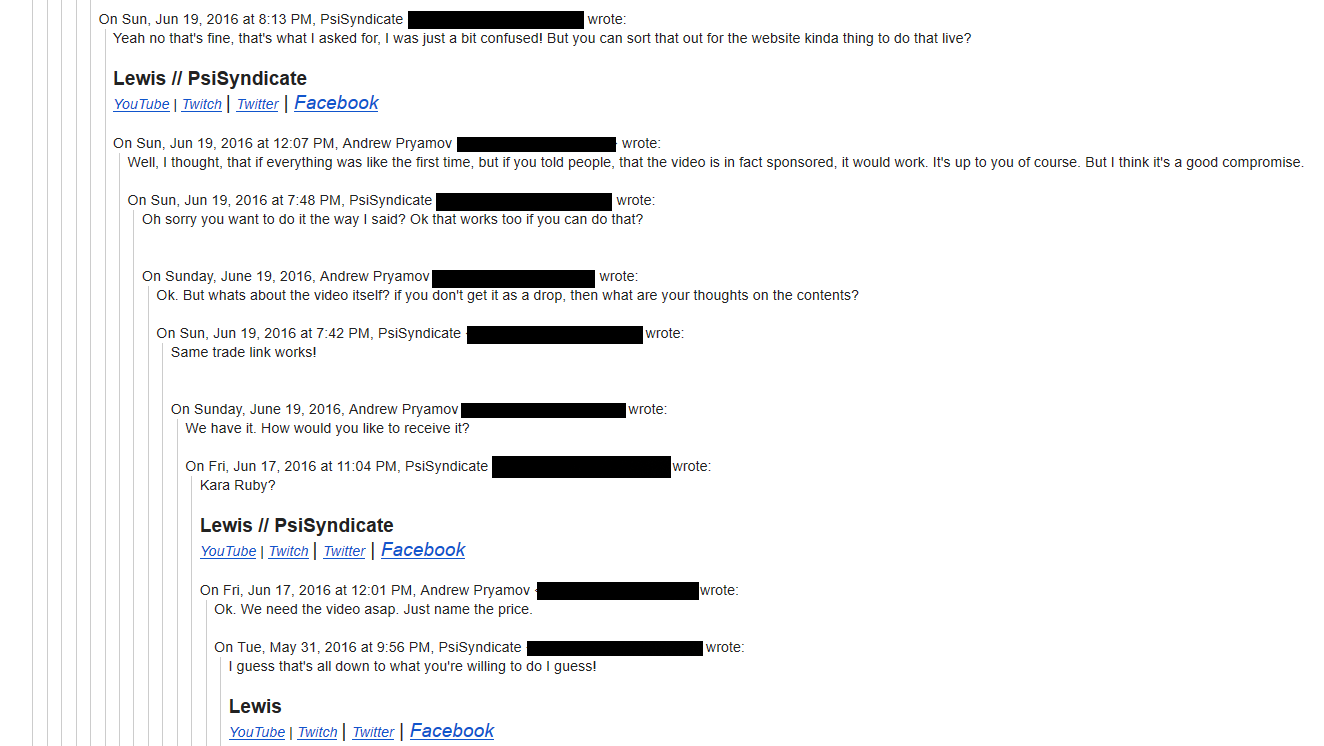 If you have a hard time reading the text, a transcription of the conversation is below, where the YouTuber and SteamLoto continue to plot out how to promote the site but make it look organic. Essentially, native advertising through YouTube.

Andrew: Ok. But whats about the video itself? if you don’t get it as a drop, then what are your thoughts on the contents?

Psi: Oh sorry you want to do it the way I said? Ok that works too if you can do that?

Andrew: Well, I thought, that if everything was like the first time, but if you told people, that the video is in fact sponsored, it would work. It’s up to you of course. But I think it’s a good compromise.

Andrew: What if we gave you some other item to unbox, that you would then return? After you upload the video, you get the karambit. Uploading the video to get paid may sound a bit overboard, but we’ve had some rough moments even with the people, we’ve already worked with. So we just want to make sure everything goes well.

Psi: Erm I mean I can unbox X and return those and accept that as a payment or something? I’m not sure, whatever you feel sounds good to be honest! As long as it’s a win for both parties I have no issue with advertising etc, it’s just obviously you can admit the website had issues in the past (which now seem resolved!)

Andrew: You unbox a medusa, accept the trade for the video and all. Then you return it. After a video is up, we send you the karambit. Just tell me if that’s ok. Yes, I admit to having problems in the past but they are, as you’ve already mentioned, resolved. As for any questions that your viewers might have concerning an awp(I’m sure some will), you just tell them you gambled it, sold it, etc. Again, we totally trust you, but these are precautions that we have to take right now, due to the reasons I’ve mentioned earlier.

But here we get to the heart of it: Andrew Pyramov of SteamLoto is responsible for misleading numerous YouTubers into “compromises” about disclosure, under the guise of transparency when a bigger rigging operation was going on.

Andrew Pyramov and people like him are getting smarter about the current landscape, and are trying to work around transparency itself to get away with their other intentions.

PsiSyndicate saw what was going on, and he realized it was wrong. He did the gaming community a favor coming forward about this.