Nitroplus and Jast USA launched Sonicomo: Communication With Sonico on Steam recently. The new game is a 3D, interactive, photo session visual novel. Players take on the role of an amateur photographer attempting to make the busty teen idol, Super Sonico, into a household name and a pop-cultural icon.

The object of the game is for players to help Sonico become a pop star by any means necessary. This mostly includes snapping photos of the 18-year-old wannabe superstar in a series of playfully compromising poses, many of which consist of her being partially undressed, barely dressed or wearing clothing that makes it easy to see up her skirt.

You can get a taste of the titillation with the launch trailer below.

It’s interesting but the game’s photo mode uses a similar shoot-’em-up style design similar to Virtua Cop, but utilized in a non-violent way. It’s almost identical to the touch-and-rub mechanic for the upcoming Gal*Gun Double Peace.

The objective is to align the cursor with the targets in the photo in order to snap successful photographs of Super Sonico. 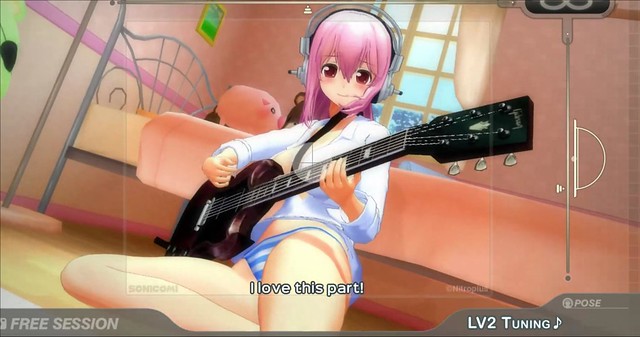 In between the photo sessions players will also attempt to get to know Sonico or try to romance her and make her your waifu!

According to the game’s store page, depending on the actions and choices you make will determine what ending you get. There are a total of 18 different endings to uncover and eight different locations to explore across Tokyo, Japan.

Throughout the game p[layers will be able to collect and access new outfits and accessories, dressing up Super Sonico and indiscreetly snapping photos of the curvy pop-star in training. 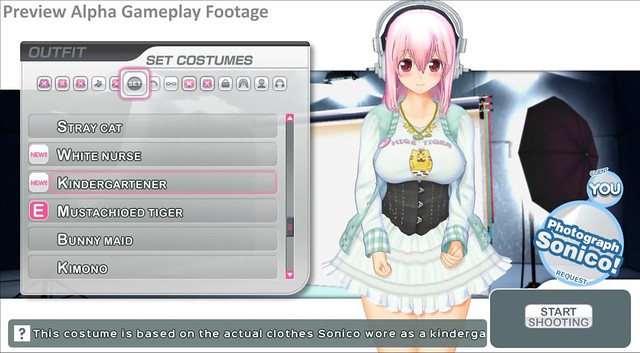 Majority of the reviews for the game are quite positive, but some of the negative reviews point out that the playthrough for Sonicomi can be finished within the span of four or five hours. Of course, Nitroplus designed the game to be as replayable as possible so gamers will unlock more costumes and check out some of the different endings, so your mileage with the game will vary based on how much time you want to keep spending with Super Sonico.

If you want to help Super Sonico become the next big idol, you can do so for the not-so-low price of $34.99 from the Steam store page. It’s currently discounted by 9% during the Steam Summer Sale, so you can briefly get it for only $31.99.