After battling with Cloud Imperium Games’ customer support, one crowd-funding backer who had pledged $3,000 has walked back on that pledge, but he needed a little bit of help and convincing from the Attorney General to do so.

Going by the handle of Streetroller, he made a post on the Something Awful forums (which you can only access by paying to register, but it was brought to my attention from a post made on Derek Smart’s website), detailing the process of attempting to get his money back from the pledge to CIG for their space MMO, Star Citizen.

“When you contributed your pledge it was applied to the building of the game and the team and resources needed to make it happen. The funds are not idly maintained in a bank account for months or years in case someone wants his/her money back.”

“[…] your payment was a deposit to be used for the “Game Cost” as defined in your crowdfunding pledge agreement, and the deposit has seen been “earned by CIG and become non-refundable” since it was “used for the Game Cost…”

You can read the full response from the customer support over on the imgur gallery here.

The Roberts Space Industries/Cloud Imperium Games representative stated that the funds were non-refundable after Streetroller signed the new terms of service that they rolled out on June 10th, 2016, which you can view over on the official website.

The updated terms of service was the subject of much discussion on the Star Citizen sub-Reddit, where plenty of people asked “What’s changed?” The simple gist of it was explained by user StrifeLover, who wrote…

“So. No more refunds is the general gist I’m getting here.”

According to PC Invasion, they detail that the TOS explicitly removed the clause about delivering the game within 18 months of a pledge, ultimately making the release date indefinite to coincide with the ever expanding and fluctuating development of the game. This was also highlighted in an article by GamesIndustry.biz, where a legal advisor noted that it would be quite slim to receive a refund under the new terms of service agreement.

StreetRoller was not impressed with the response he received from RSI customer support, so he took things a step further by stating that he did not agree to their terms of service that relinquished him of his consumer rights, recalling a case in Washington in which the Consumer Protection Act superseded the crowdfunding statures and a backer was awarded a refund.

StreetRoller proceeded to receive some of his refund through Amazon Payments, while also contacting the California Attorney General’s office about the issue, which also involved Cloud Imperium Games’ co-founder and vice chairman, Ortwin Freyermuth. 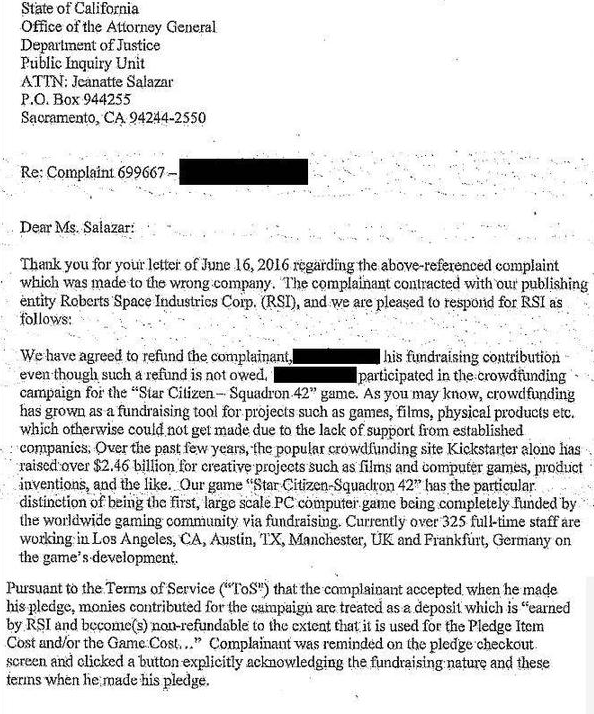 After being contacted by the Attorney General, Freyermuth conceded to the refund request, but not before admonishing StreetRoller for the “takeback” request, and explaining that it was “not fair” to fundraising backers, writing…

“[…] having reviewed complainant’s interactions with our customer service agents, we have determined that it is also in our interest to terminate his participation in our fundraising community. We are therefore agreeing to close complainant’s account permanently and we will issue a refund of his pledge promptly.”

Eventually Streetroller managed to get a refund from Paypal as well. Shortly after that he received the additional balance that he was unable to recover, which came up to $1,660.00.

He states that he talked to a LA county investigator and explained to them that Star Citizen was a scam and he makes it known that it’s his opinion. This prompted the investigator to start to get as many people as possible to write complaints about them to build a case.

While it’s great that StreetRoller managed to get back his refund, it won’t bode well for future crowd-funding projects of large scopes that will take many years to complete if lots of public drama and accusations of scams are thrown around without proof. This is certainly not to say that there haven’t been high-profile scams, because there have been plenty, some of which have been covered here on the site.

CIG hasn’t done themselves any favors making the refund policies more difficult and cumbersome for backers to navigate, which plays right into the hand of drama mongering. However, they have produced multiple playable modules to prove that work is being done, so the claims of a scam ring a little hollow when there are multi-million dollar modules that are playable at the moment for backers. Is it still a far cry from where it should be? Absolutely. But it’s still one of the largest, most complex and expensive projects in the history of video games. It’s definitely going to take a lot of time.