Developer Puuba and publisher Kasedo Games have a potential blockbuster sleeper-hit on their hands with The Metronomicon. It’s a game about adventure, heroism and dance-battling evil like the days of disco never went away.

Recently YouTuber and gaming pundit TotalBiscuit uploaded a preview video for The Metronomicon, giving gamers a seven minute look at the gameplay, along with running down some of the details of how the game is played and how the music-rhythm factor is accounted for in the turn-based battle system. You can check out the video below.

The cool part about it is that it fuses in tactical cogency from turn-based RPGs with the fun and entertainment values of a dance rhythm game. It’s genius, really. Puuba – if they execute the designs and mechanics right by The Metronomicon – could have a huge hit on their hands with this game because it looks great, it has an awesome art-style that easily draws you in, and the music is catchy and fun to listen to.

Anyway, as for the actual game… the battles will see players being able to pick from a number of classes and bring them into the fight. Each class has a number of skills that can be utilized during combat, from healing and magic attacks, to taunts and melee strikes. 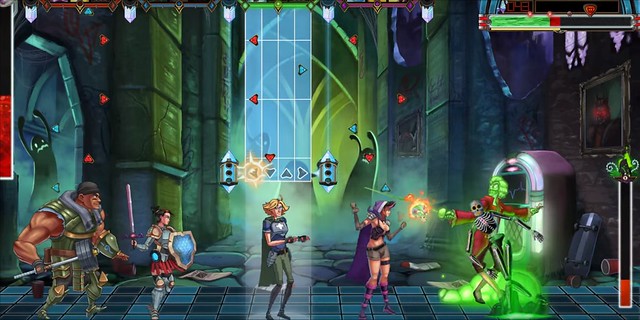 Players will be able to perform successful skill executions by completing a rhythm sequence. The more sequences completed with a character, the more powerful their skill becomes the next time they use it.

The trick is to keep switching between the characters to have them execute the necessary skills to defeat the enemy.

One of the things that really helps sell the game on its theme is the fact that even the bad guys dance and bounce to the tunes. According to the preview from TotalBiscuit, some of the enemies can utilize skills that can disrupt your rhythm meter, which can add an extra layer of difficulty to the game.

There are different difficulty levels in the game for those with a masochistic streak, and loot to acquire and grab from various quests and battles. There will be additional classes present in the game for players to mix and match their party with, along with additional skills to unlock.

The Metronomicon is due for release later this year on PC. You can learn more about the game by hitting up the Steam store page.