Players take control of Jill, a bartender at a dingy little pub called Valhalla. The core of the game involves talking to people, making drinks and being the best bartender that the age of cyberpunk has ever seen. There’s a lengthy walkthrough available for the game to give gamers an idea of how to play the game, as well as some tips on utilizing some high-end bartending skills.

The game starts with Jill having to deal with the trouble of paying rent and getting a bartending tutorial from her bar-mate, Gillian. Here players will learn how to mix drinks and master the art of shaking, stirring and adding ice to drinks. There’s a 16 video walkthrough from YouTuber theguardian35, covering the game from start to finish. You can check out the complete walkthrough below.

In between listening to the lives and stories of various customers, players will have to fulfill their drinking desires.

The first customer Mr. Donovan… it’s like a bald, black version of Nick Denton… well, if Denton grew a conscience. Donovan breaks down why people love and hate celebrities, how sensationalism sells, how gossip columns keep the clicks rolling in and how opinion pieces are mostly written by douche bags. Sounds like today’s media market.

There’s a collection of various individuals that Jill encounters, having to pour and make drinks in between listening to their life’s stories. One of the more interesting ones was Sei, a member of the Valkyrie Corps and a “White Knight”. There are layers of nuance to a lot of the conversations and encounters that are sure to give just about everyone a chuckle at some point or another.

For some of the challenges in the game you’ll need to make specific drinks without being told exactly what to make. In the case of the unconscious woman you can make her a Bleed Jane to calm her down.

Successfully tending to patrons nets you some cash that can be used to pay for the bills or buy things. Jill makes a pretty penny each day but still needs to keep money on hand for rent. 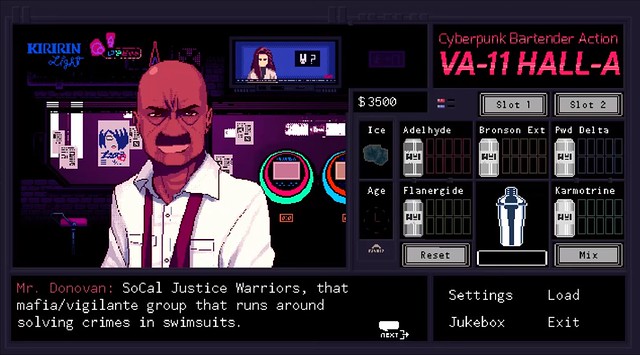 One of the best conversations in the game takes place the second time that Mr. Donovan comes into the bar, where he takes a nice big dig at San Francisco Social Justice Warriors. It seemed like a big, thick middle-finger to the current censorship brigade happening from the regressive left.

The game is more visual novel than a simulator or strategy title, so if you’re more-so interested in conversations, futurism and cyberpunk settings with a synthetic dreamwave soundtrack, you might like VA-11 Hall-A .

You can grab a copy of Suekaban Games’ cyberpunk bartending tale from the Steam store for $14.99.