2K Games and WWE are doing things just a little differently with the upcoming WWE 2K17. While it’s still the recycled leftovers from WWE 2K16, which has been Yuke’s go-to methodology for pumping these games out each year, they’re introducing a new limited collector’s edition for WWE 2K17 called the NXT Edition.

While it may have been buried under all the news about EVO 2016, the WWE 2K17 NXT Edition is actually a pretty cool package containing several NXT superstars, including Nia Jax, Demon Finn Balor and the international superstar, Shinsuke Nakamura.

For this year’s edition the NXT bundle comes with an eight-inch statue of Demon Finn Balor, decked out in his garb and body paint. It also contains a limited edition poster of Shinsuke Nakamura painted by Rob Schamberger with Nakamura’s autograph on it. 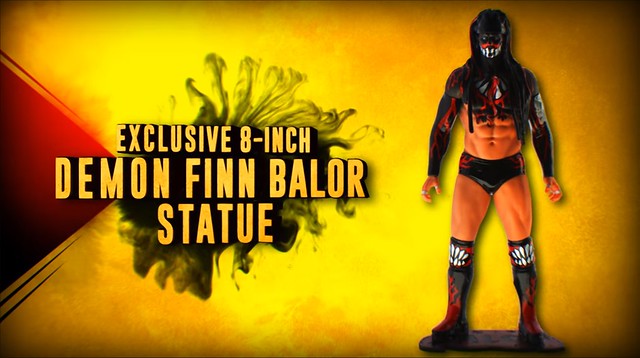 That statue actually looks a lot better than I thought it would. The detail and likeness to Balor is exquisite.

NXT cards, a Goldberg package and a special NXT limited edition box will round out the whole thing for $99.99. Not a bad price. It’ll be limited to the Xbox One and PS4. A trailer featuring the content can be viewed below.

There aren’t enough changes to the game to completely win me over. I’m still disappointed at the cardboard-style movements and animations and the limited scope of the game’s wrestling. I miss the days when different weight classes had different movesets and when the wrestling felt organic and not so stiff and stilted.

Oh how I long for a No Mercy-style reincarnation of wrestling games.

Anyway, you can look for WWE 2K17 and the NXT Edition to launch on October 11th. I wonder with Brock’s potential drug testing showing up positive for banned substances will they axe him from the cover of the box? Interesting times. For more info feel free to check out the official WWE 2K website.