Saibot Studios’ Doorways: Holy Mountains of Flesh is a true and thorough horror game. The final chapter in the game has released for the title, and gamers looking for a little help getting through the game and completing some of its puzzles will find some help courtesy of some gameplay walkthroughs.

YouTuber CjuGames has a complete gameplay walkthrough for Doorways: Holy Mountains of Flesh, featuring 10 videos. The game is of decent length and you can check out the full walkthrough below.

Doorways is the name of an organization that goes after dangerous criminals beyond the scope of normal police factions. Players assume the role of Thomas Foster, picking up shortly after the end of the third game, with Foster descending into the very bowels of a criminal’s mental hell. Players will have to hunt down Juan Torres in Argentina.

While in the hellscape, it’s possible to scavenge through a small village while you seek clues. Majority of the houses you’ll enter are empty and don’t have much to interact with. You will find a letter in one of the homes from Clara about going to a feast.

You’ll need to head into the second house from the stairs where an audio clip will play. You’ll find a broken goblet in the second room on the desk that you can take.

You’ll need a dagger and a sun dial after you move through the corridor that leads toward the mansion on the hill. 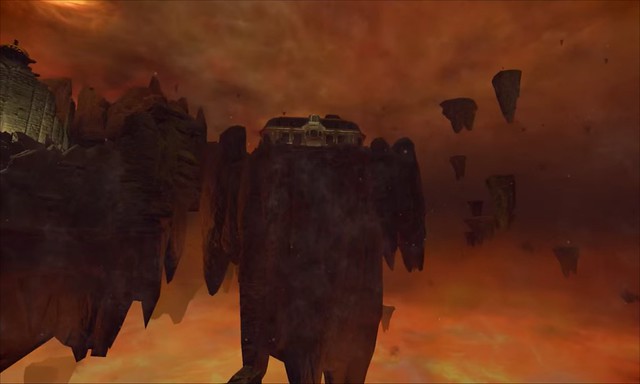 Head up the steps and there are some ruins that you can explore. At the top of the ruins you’ll find a note.

You can hop over the fence to your left that leads toward the school. Move through the corridor of voices. When you get to what seems like the end of the corridor there’s a second passageway to the right that will lead you up to the prison. If you follow the path you’ll end up at a part where floating platforms will pop up after you reach the dead end. The floating platforms will lead you to the school.

Traveling through the corridors you’ll find a screwdriver through one of the doors beyond the playground. Head back to the playground and you can enter into the library where another note will reveal that Jeronimo, the son of Torres, was a product of incest. You’ll encounter a disturbing apparition before heading into another corridor.

In one of the rooms you’ll find a fuse box that you’ll need the screwdriver in order to take the panel off. Turn on the power to the other two rooms, including the library. Head back into the library and there’s a key on the shelf that you can take. Use the key on the padlock to enter into the next part of the school. 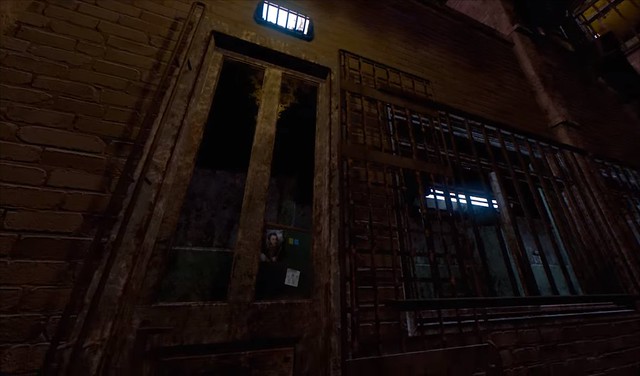 Proceed through the corridors and head upstairs through the dinning hall. Head into the open door and push the tray out of the way to move through the room. Push the television close to the electrical switch on the floor and plug it in and it will light up the room. Keep the lights on because it’s the only thing that keeps the monsters away.

You’ll need to push the television in between a box and the air duct in the ceiling. Open up the air duct and climb up the grill to get into the duct. You’ll need to jump across the beams and land in the light where the dagger is to take it. There’s also a key on the desk. Use the key to exit the door. 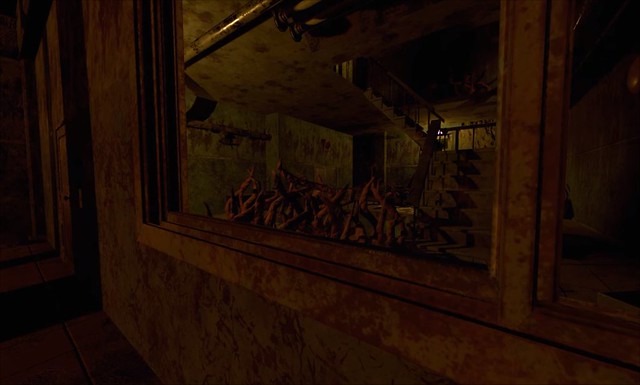 You’ll find the proper way through the school corridors and the platforming puzzle segments in the second video in the playlist.

The key you have is basically a master key and you’ll need up head upstairs, head out the window and climb across the vines in a platforming segment that will lead you down and back into the corridors of the school. Head back down the steps and head into the dining room by using the key to unlock the door. There’s an air duct you can move through that leads to the generator room.

Push the cart over to the cage and climb up the gate and get the cooking instructions for the coolant, which reqyures the following ingredients:
600ml Agent 0-31
200ml Insulting Oil 24-c
200ml Nanoconductor 0-AD

You can now turn on the generator and all the lights in the school will be turned on. You can now head up to the top floor and acquire the relic of the Saint of the Flesh. Head to the basement to exit the school.

Later on when you head back outside you’ll encounter a sculpture of the Saint of the Flesh, along with a few more houses you can investigate. As you move toward the tower, you’ll encounter the second part of the Desolation passage.

In order to get the other relics you’ll need to head back to the mansion and use the dagger to create a pathway toward the mansion. 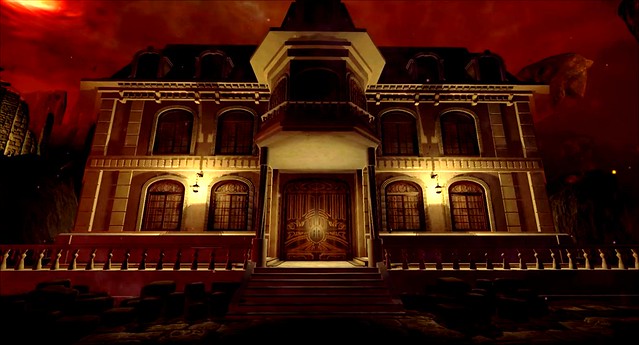 You’ll find a note for the constellation Libra before heading upstairs where you can explore some of the rooms. You’ll also find another constellation note, one of the Phoenix, upstairs.

You’ll have to do a book shelf puzzle. You’ll need to pull the following red book numbers from the shell: 5, 11, 9

Inside you’ll find the skull that you can take, along with access to the attic.

After being taken through the black mirror by Celia, you’ll find another note and a staircase with a doorknob at the top.

You’ll also need to rearrange the rooms to access 6 and 7. A good representation of how you need to structure the rooms can be viewed below. 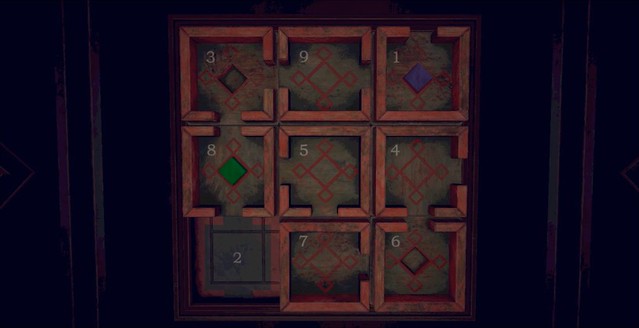 If you place the the blog in the 8 block and then head upstairs you can head through the rooms to get the key from upstairs. Use the key to open room 7. Drag the mirror through the first dining room area to the next area so both mirrors face each other. A portal opens up.

Enter the portal and grab the dagger from the table. 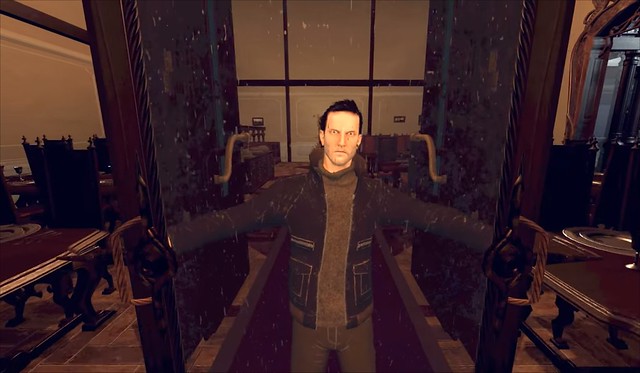 Go back to the puzzle room and connect it to room 6 and add the stairs so you can head up and use the dagger to open the door. As indicated in the images you’ll also need to connect room 3 and 1 so that you can access the exit.

Before going upstairs drag the statues from under the floor to work as platforms as indicated in the image below. You’ll need to then move through quickly because Celia will be chasing you through the area. 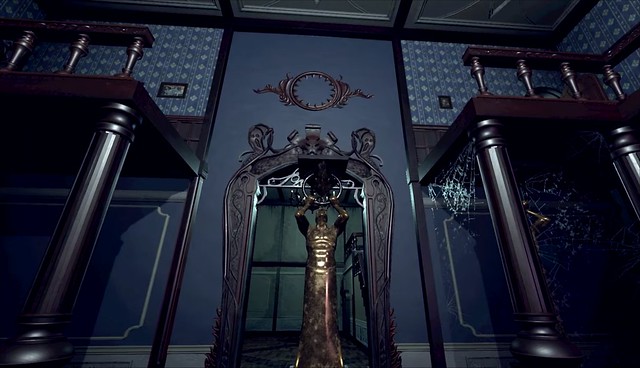 After completing the platforming you’ll need to drag the mirror in front of the other mirror to create a portal and escape the house.

When you get back to the main hub you’ll need to explore some of the houses with the red flesh tentacles, one of which contains an item you’ll need to get into the tower.

Head to the house with the red tentacle coming out of it that’s to the right of the statue of the Saint of the Flesh and use the crescent dagger to unlock the door to head down into the torture dungeon.

As you travel through the dungeon it’ll enable you access to another piece to access the tower.

You’ll need both daggers to place into the door, you’ll need the goblet, the skull, the flame and the heart to open the gateway towards the tower.

Once you get inside there’s another note you’ll find after scouring through the tower along with a key in a room on the furthermost left-hand corner room. 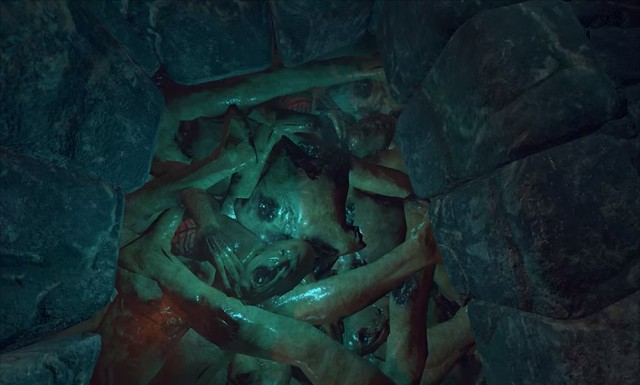 Head through the locked room using the key and travel down through the spiral layer encircling the tank where the sacrifices’ bodies were dumped.

You’ll need to head through the grinder room and perform a number of platforming segments leading up to the doorway. The horrific device that grinds up the flesh can be turned on and later on there’s a lever that opens up the capsule where a bunch of bodies drop down and can be grinded up. 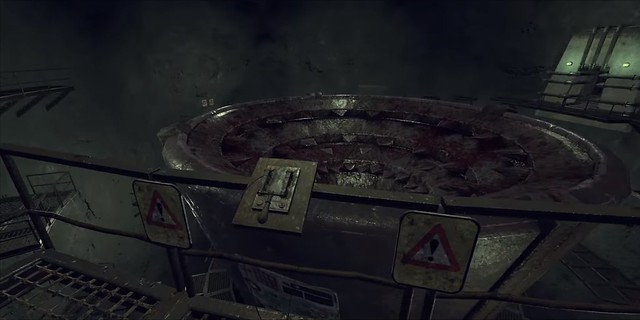 Take the elevator back up to the main temple area where the temple will be flowing with blood.

Head through the open doorway that will lead you into a sacrificial chamber where there’s an altar that has an interactive skull at the top that opens various doors.

The first room to the right will lead you down into a room with a puzzle where you’ll need to make it where it’s thick on the left, medium in the middle and thin on the right. This will make the platform turn into a step system that allows you to get the statuette. Take the statue and head back into the main sacrificial chamber with the altar. Activate the skull to head into the next room where you’ll have to perform the blood puzzle again. 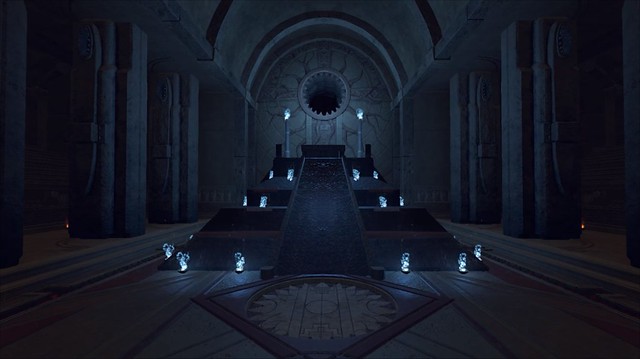 You’ll need to tweak the puzzle in the next room to make it where you can reach the second statue and take it to the altar room.

You can see what the puzzle design needs to be setup like in the second room with the image below, which will allow you to platform hop up the blocks and you can then proceed to grab the statue. 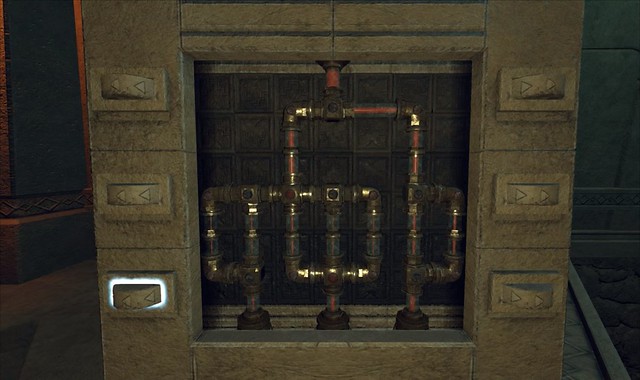 You’ll need to mess with the skull at the altar to turn it until blood flows into the chamber and you’ll use it to swim up into the final human grilling area.

You can grab the final note from Juan, where after you read it the Saint of the Flesh will come to life.

In order to beat the final boss you’ll need to hide behind the pillars and wait for the Saint to throw a spear into the pillar. Take the handles of the spears and stab them into the hearts scattered around the arena.

When the Saint of the Flesh is stunned, run up close to him and activate the notches on the ground to unscrew them. Rinse and repeat dodging the spears and stunning the Saint until you can unhinge all the notches and cause the Saint to fall into the depths of hell.