Crash Override Network, the abuse specialist network that was formed by Zoe Quinn and Alex Lifschitz, recently had chat logs leaked that revealed that some members of the group were partaking in doxing and harassment. These revelations ended up having the official Wikipedia page amended to include these details, but so far the network is still listed as a Trusted Partner of Twitter.

“An August 2016 leak of the group’s internal chat logs suggested some members participated in doxing and harassment of Gamergate supporters.[13] Ian Miles Cheong says he was a member of the chat group and that the logs are genuine.[14]”

This update didn’t go through without adverse persistence from a certain Wikipedia editor going by the handle of PeterTheFourth.

According to Peter, none of the sources reporting on the Crash Override Network leaks were considered reputable and he suggested waiting for other “reputable” outlets to report on the news. The CON leaks have already been sent to many of the outlets that Wikipedia deems “reputable”, such as Eurogamer, Polygon, Gamasutra and IGN, but said outlets have opted not to report on the leaks.

During the debate Peter repeatedly claimed to hold off on including any coverage of the Crash Override Network leaks until other resources report on it, writing on the Wikipedia talk page…

“If this is an actual, newsworthy story worth coverage here, it will be picked up and reported on by a reputable, reliable source. All you need to do is wait- there’s no point forcing it through now with unreliable sources.”

The other Wikipedia editors vehemently reproached Peter for not giving ample reasons for saying why the sources were not reliable.

When some users attempted to originally add the CON chat leaks to the article, Peter made various edits to remove them at first until finally being out maneuvered by the other editors to get the revisions to stay, as noted on the article’s edit history. This is not surprising given that the CON chat leaks revealed that Crash Override Network had direct access to Wikipedia editors in order to have changes made to articles to portray the organization and its members in the most positive light as possible.

Nevertheless, now that the statements of harassment and doxing have been included in the Wikipedia entry of Crash Override Network and multiple sources have reported on the organization having been involved with harassment, the next big question is: why are they still considered a trusted partner by Twitter?

If you check Twitter’s Trusted Partners page they state that the global collaboration with various organizations is for “Creating a safe, secure, and enjoyable environment for our users”. Crash Override Network is listed as an expert under the United States tab for “Offensive speech” that relates to offensive speech and harassment. 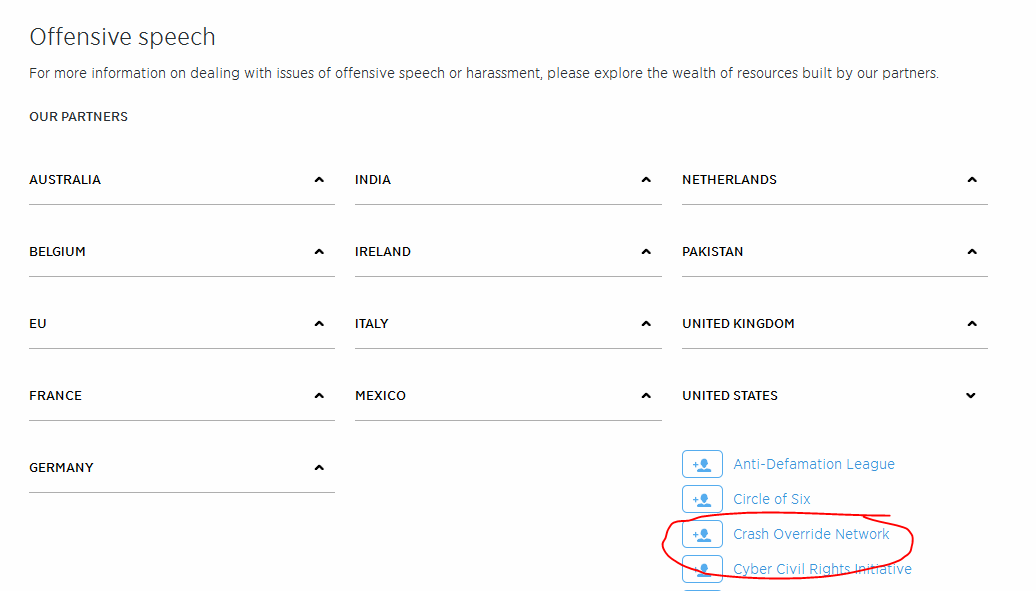 Jack Dorsey, CEO of Twitter, was notified about the discrepancy of having an organization listed as a “trusted partner” for offensive speech and harassment after their members were involved with doxing and harassing those associated with #GamerGate, so we’ll see if Twitter amends the Trusted Partner list or issues some sort of statement to address the situation.