Crash Override Network is supposed to be an anti-abuse specialist organization to help victims of cyber-bullying and harassment. Recently, however, chat logs were leaked that revealed that Crash Override Network, oftentimes shortened to CON, was involved in some of the very activities that they claimed to  fight against. In one particular section of the logs, it was revealed that the members had direct access to an editor on Wikipedia, as well as getting changes made to articles at the behest of CON’s members.

The chat logs that were leaked from the Skype group from Crash Override Network were confirmed to be legitimate by former member and contributor to Heat Street, Ian Miles Cheong, as well as online abuse specialist Randi Lee Harper. You can access the full chat logs from the Kotaku in Action CON leak megathread.

Whoever recorded and leaked the chat logs managed to capture a section where Zoe Quinn, one of the co-founders of Crash Override Network, was distraught about a line on the 4chan Wikipedia page, where she states in the chat, under the handle Dr. Internet PHD…

“ahahaha wowwwww the 4chan wikipedia page needs some serious editing “In August 2014, the Jabronis controversy in video game culture involved 4chan in events surrounding a dispute between indie game developer Zoe Quinn and the self-described radical feminist group The Fine Young Capitalists. After 4chan users donated over US$5,000 to TFYC’s Indiegogo campaign for a charity game jam, they were allowed to create a female character to appear in the winning game. Users of the /v/ video games board created a character[114] named Vivian James, a pun on “video games”, and designed her to appear like a normal female gamer.[115]”

A user named Tesseract quickly responds by saying… “ I’ll get ryulong on it”.

CON member Izzy Galvez then asks… “Is that Zoe’s addon? Making the change?”

According to the time stamps in the chat logs, the individual who leaked the chat logs was approximately nine hours ahead of the time-stamps recorded by Wikipedia, based on the page edits conducted by Ryulong.

Nevertheless, the edits took place over the course of an hour and a half on January 3rd, 2015 after the individual Tesseract mentioned in the chat that they would get Ryulong to make the edits.

Sure enough, if you check the Wikipedia edit history for the 4chan page, you’ll see two edits by Ryulong modifying the section that Quinn took issue with regarding The Fine Young Capitalists and the 4chan donations. 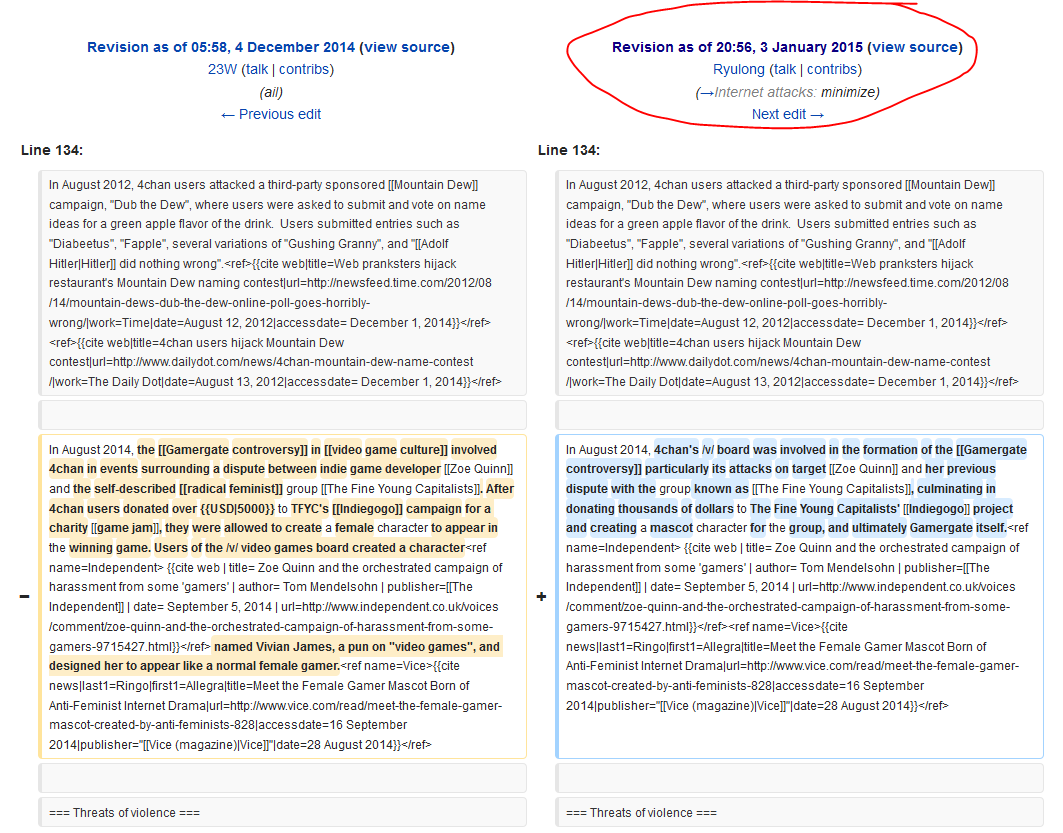 Ryulong made no further edits to the 4chan Wikipedia page after that. His last edit before being requested to make the change was on October 14th, 2014.

Nearly an hour and a half after the request, Tesseract informs the chat, writing…

The edits didn’t last too long, though. The modification of the page by Ryulong was eventually reverted by other editors.

Now for those of you wondering whether or not this breaks the rules, it in fact does. According to Rule 7 on Wikipedia’s Ten Simple Rules page…

“If you have a personal or financial interest in the subject of any article you choose to edit, declare it on the associated discussion page and heed the advice of other editors who can offer a more objective perspective.”

In this case, Ryulong had a personal and financial – according to a GoFundMe drive by a group called GamerGhazi – interest in the subject matter. After a lengthy and complex arbitration process, Ryulong was eventually banned due to edit warring over the #GamerGate article and other pieces relating to Zoe Quinn on Wikipedia.

Nevertheless, the chat logs prove that he was working closely with people who were in stark opposition to #GamerGate and the chan imageboards, thus compromising the neutrality of the articles on Wikipedia.

You can read the exchanges during the section involving Ryulong and Wikipedia by checking out the truncated logs in this pastebin file.